I am Not Snow White 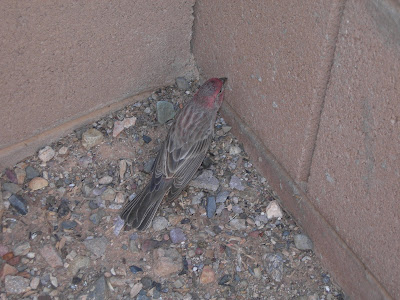 In the fairy tale, "Snow White and the 7 Dwarfs" the princess finds solace in nature. In her story she runs to the forest and the birds and butterflies befriend her, the trees hide her and protect her. I don't know if everyone who loves nature has this fantasy, but it certainly lurked quietly in my heart. However, 2 weeks ago reality broke through this dream for me.

I was heading out of town for the weekend and happened to step out the back door. A small female house finch was thrashing about on the ground. I picked her up and moved her onto the rug on my patio. I thought maybe she struck the window and was a bit stunned. This often happens with birds and I figured in a few moments she would regain her composure and be on her way. As she continued to flutter on the ground a small male house finch came around the corner and hopped over to her. He showed no fear of me (as I was quite close) but hopped to the female, then put his beak next to her as if to ask; "What's wrong, can I help?" Then he hopped over towards me, looking at me with his little head cocked to the side.

I only wanted to help. So, I dipped my finger in the dog's water bowl and placed a drop on the side of the poor bird's beak. She fluttered a moment, then stilled. She was dead. Perhaps she was just too injured, I thought, so I went in search of the little male who was still hopping around my small yard. I found him in the corner near the air conditioning unit. He was hopping about with his mouth open like he was panting. It was hot and sunny in that corner, so I put my hand out and he hopped onto my palm. I thought, Oh! this little bird knows I love him and would never harm him. How special I am that he trusts me! But, oh, how I deceived myself.

I brought the little red male house finch over to the patio out of the sun. Once again I dipped my finger into the cool water bowl and placed my finger above his head. He eagerly lifted his beak and tried to swallow the droplet from my finger. He barely swallowed before he tumbled over and died instantly. I stared at the limp feathered body before me, emotion rising in my throat. What had I done? Had I caused this little bird's death?

Initially I panicked. I wondered if my water was bad, or if I had chemicals on my fingers. Then my concern caused me to seek help. I started by calling my vet. This started a 2 hour ordeal of phone calls and being passed from one agency to the next. Before it was all said and done I had talked to 2 wildlife rehabilitators, the Arizona State Veterinarian , Vector Control, the Department of Game and Fish, the University of Arizona and the Pima County Health Department. They were the ones who finally asked me to place the birds in a plastic bag and refrigerate them. On Friday morning they retrieved them for testing. I haven't heard any results yet, though I did try to call on Monday.

Perhaps I will never know what caused the little finches to die, but I am left with this question: How is it that with nature, our attempts at kindness can go so awry? How little we understand this world we live in. My ignorance hastened the death of two house finches, a small thing in the vast ocean of problems plaguing the environment. It is past ignorance that is threatening our desert now.

Here in Arizona there is a vast effort underway to eradicate buffle grass, an invasive African species that was planted here years ago as forage for cattle. Now that it has spread it threatens the Sonaran desert and the saguaros because it is a fuel for fires. Before buffle grass the saguaros were mostly safe from fire since there were expanses of barren earth between them and fire could not travel without fuel. Now the buffle grass makes a fuel path straight to them, and they have no natural adaptation to withstand a firestorm.

I have heard that the definition of ignorance is not stupidity, but the lack of knowledge. Some people would say that ignorance is bliss, but I have discovered that ignorance is trouble and often I am not the only one who has to pay for my ignorance.
Posted by Kathie Brown at 2:39 PM