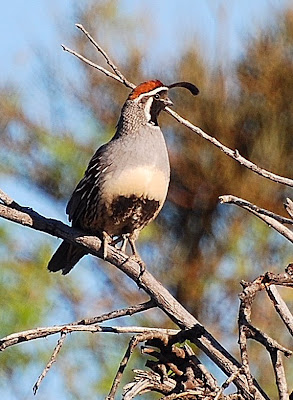 (Photo taken by Kathie on April 14, 2008 in Sycamore Canyon with a Nikon D80)
It’s that time of year when the Gambel’s Quail are up and about with their little families. I see the males almost every day perched on my fence or block wall. In the desert they often perch in a tree or a dead snag silhouetted against the sky.

(Photo taken by Kathie on April 14, 2008 in Sycamore Canyon with a Nikon D80)
They are the family lookout. While the father watches, the mother and babies feed, but if Dad starts to run, the babies quickly follow, leaving Mom in the dust! 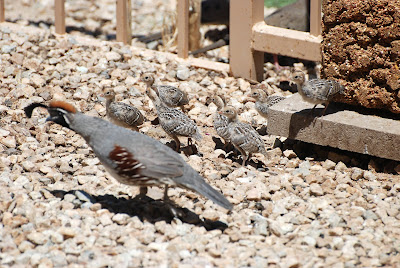 (Photo taken by Kathie on May 16, 2008 with a Nikon D80 in my yard)
I have seen coveys of quail come to the feeder and still one male will perch on the fence while the rest of the flock feeds beneath. He forgoes his own nourishment for the protection of the flock. 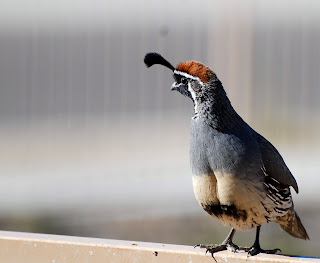 At his alarm the rest of the birds flee. Often he doesn’t make a sound but simply drops to the ground and everyone runs! If there is enough cover, they seem to simply melt away in the brush. If they feel danger approaching too quickly, then the birds take flight. I have seen them fly up to a neighbor’s rooftop to avoid danger. However, they seem to prefer to keep their feet on the ground. When photographing Gambel's Quail I have found it helps to have the light on their faces or else the eyes disappear into that black mask. 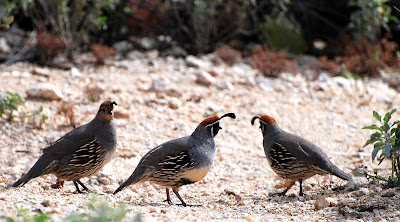 (Photo Taken by kathie @ Saguaro National Park East February 18, 2008 with the Nikon D80)
To view other Skywatch Photos please click on this Skywatch Friday link hosted by Wigger's World.
Posted by Kathie Brown at 8:52 AM

Perfect entry for SWF! reminds me the quote... a brilliant diversity spread like stars, like a thousand points of light in a broad and peaceful sky. .. LOL! mine's up too hope you can drop by.

Looks like you are getting along well with your D80.
I like the selective focus you achieved on the first photo by using f/5.6 on your 300 mm focal length.

These are great photos and such as IDA, I'm also amazed with the beak of those birds!

Very nice. I haven't seen a covy of quail since World War II days. Wow. That is a long time ago. I guess we still have them in Ohio in places. I will have to link you so I can come back and see what else you got.

Wonderful post. I really enjoyed all of these photos. I'm not sure if I've ever seen a quail up close. That first one is a stunner.

I suppose I shouldn't confess that in my younger days I was quite a bird hunter. My favorite game was quail. I bagged and ate my share. I'm content now to watch them. I've always loved watching and listening to quail. I've never lived where Gambel's Quail resided, but they are a beautiful bird.

What great photography! Tell Gus he's doing a first rate job -- very professional. Love your blog -- I'll have to add it to my sidebar. Appreciated your comment on my blog today. Yeah, that area is really nice at that hour and all sorts of atmospheric stuff can go on. Nobody out there except maybe a jogger or two -- a very peaceful place.

Best regards -- and congratulations on that award -- Troy and Martha gave me one too.

Beautiful pictures! I have never seen quail perched anywhere - only on the ground.

How did I miss you yesterday? Very nice.

Troy, I don't even pay attention to the settings yet on our new D80. I just have it set to automatic. For bird shots I keep it in sports mode. I know how to do all that stuff with my old Nikon FG but I have not figured out how to change the F stops on this one. I still haven't read the manual! I'm too busy blogging!

Texican, I have eaten grouse and pheasant before, but never quail. I love the birds, but there are things about me you don't know...

Aphoto a day, well thank you! You do know that Gus has his own blog now?

I'll pass along your message and thank you for adding me to your blogroll.

Wow! what a lovely set of photographs :-)

The bird on watch is perfect for the sky watch theme. I have never seen Quail and I am very appreciative of their beauty, especially of the one shown in the first photo. They sound like a fascinating bird and it must be a joy to be able to observe on a regular basis.

Wonderful photos of these very interesting quail. We just have the garden variety. I have been looking through some of your bird pictures and am captivated.

Well, you know I'm just beside myself with these photos! I adore this quail species with that little feather in their spiffy hats. How sweet!

Gambel's Quails look ver nice one with their top knots. I enjoyed this post.