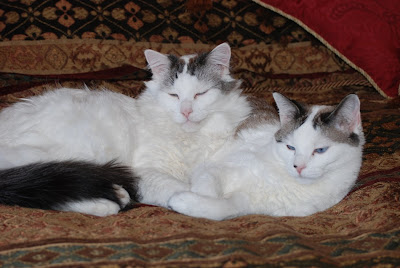 Breezy Boy and Bonnie 11-14-08
I know this is a birding blog and I usually don't write about my pets, but I had an unusual event happened recently and I can't explain this. I have had pets all my life but I have never had this happen before.
I currently own two cats which I keep inside at all times. I adopted Breezy Boy from a shelter about 5 years ago now and I adopted Bonnie to be his friend a year later. When you bring a new cat into the house there is usually some adjustment time, but eventually the two became best friends and Bonnie will frequently cuddle with Breezy and even give him a bath. So far, all of this is normal. However, last Thursday night all of this changed.

I arrived home late and exhausted from a trip up to Coolidge to return my grandson to his parents. Before going to bed Gus and I stepped outside to enjoy the lovely star filled night. We were only outside for about a minute or two, but apparently I did not close the patio door completely. When we turned to come inside, Gus asked me if I thought the cats could have gotten out. I didn't see either of them and I said I didn't think so. So we came inside, closed and locked the door, and went to bed.

The next morning we slept late and I didn't get up until around 9 a.m. I proceeded with all my morning chores, including filling bird feeders. When I went around to the side yard to fill the feeders that I can see from my den window I dumped the old seed on the ground, then filled the feeder. For some reason I decided to look down at the seed on the ground, which the quail usually like to clean up. Suddenly I saw this cat's head and one paw reach out from deep inside the brittle bush. I thought, "There's a cat hunting my bird feeders!" Then I thought, "I wonder whose cat this is. It should be out here. It could get eaten by coyotes or owls. I wonder if it will let me catch it." Then I thought, "That looks like Breezy Boy." And then the light dawned in my groggy brain. It IS Breezy Boy!

I gathered my cat up in my arms and rushed inside. He had been outside all night long! He has never spent the night outside before, ever! I was shocked and relieved all at once. Now here's the strange part. When Bonnie saw him, she started growling and hissing. she refused to eat next to him or sleep near him. anytime he comes into the room, she growls and hisses and runs away! She's been doing this for a week now and today I am just beginning to see her thaw. She actually got on the couch and cuddled up with him for a minute and started to wash Breezy's head. Then she growled and jumped down. 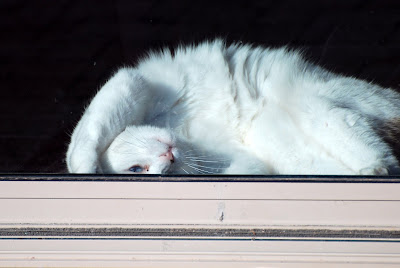 Anybody have any theories on this? These cats have lived together for over 4 years. What gives? Breezy did not act any different towards Bonnie. Of course, she is my juvenile delinquent and gets into all the trouble in the house, but why would she act this way?
Posted by Kathie Brown at 2:00 AM

I do! I do! I think it may be the smell on Breezy. Cats are very into smell. I know, my cat has to smell everything all the time and he has been an indoor cat all his life. Eventually the smell will wear off and Breezy will be just Breezy all over again.

I agree with Pat. He must have come into contact with someone or something during the night that she just does not like. Is it possible to bathe him?

I agree with the smell idea. Bonnie is probably jelous of Breezy get such a new adventure. I'll bet they'll be together soon.

I've heard that cats will sometimes react to their housemates the same way after s/he has been to the vet. Same theory - the returning cat smells different.

I'm so glad your story has a happy ending.

Yes, it's all about the smell wlith cat. I sometimes think they don't go by "faces" at all. My four are indoor only, and it got so bad taking them one at a time to the vet, and getting over the days of hissing that I schlep all four at once now (bless the vet, I get a "group discount"!). It's a lot of work but no more drama. I'm sure that's what you have going on. It will eventually pass. You must be so relieved she didn't stray away! Mine would have I'm sure!!

I'm with Wren on this--in fact our vet recommends routinely, as in, not only if you experience problems, that any time a cat leaves and returns, you re-introduce them by letting them sniff eachother underneath a doorway before opening it and allowing them free access.
Apparently smell recognition fades very quickly and must be re learned?
You'd think something as basic as that would be everlasting?

Yep, everybody has the right idea. It is quite common for a cat to come home from the vet's office or other strange place and have the cat who stayed home get all freaked out. We believe it has something to do with smells, either odors trapped in the fur from wherever Kitty was or perhaps the release of fearful pheromones that the other cat is picking up from the returnee.

Several things that may work: (I stress "may" because cat people know that no two cats ever react the same way.) Put a drop of your perfume on the top of each cat's head. Then, they both smell alike. Rub a clean wash cloth on cat 1's face (around the whiskers, where their scent glands are. You know, the place they rub on the door frame and the couch and you and ...) and another on cat 2, then switch. You are rubbing cat 2's scent on cat 1 and vice versa.

Have a catnip party, IF, that is, catnip mellows your cats out. I have known some cats who get mean when they are on the 'nip, so only do this if you know your cats are cool with it.

Feliway - In bad cases, this feline feel-good pheromone helps re-introductions, moves, and other stressful events go more smoothly. It comes as a plug-in diffuser or a pump spray. Don't spray the cats, spritz it on a towel, cat bed, etc.

I now return you to your regular blog comments section.

Well, it seems that all of you were right about the smell thing. I did consider giving Breezy a bath but decided to let things take their course. On Friday night (April 17th) they finally kissed and made up and they are both happily cuddling in my lap together again!

Katdoc, I was hoping you would chime in on this. I did not know that smell was such a powerful thing for cats. Breezy never rejected Bonnie but she is the Freak-out Queen of the Universe. God only knows what trouble Breezy got into during the night and what he smelled like! He looked so relieved to see me when I picked him up. I can't hug or cuddle him enough!

Thank you everyone who chimed in and commented! You really came through on this issue. I truly had never seen this happen before. I really appreciate all of your imput! And thanks for the virtual house call Katdoc!

That was my first thought too, pets are so driven by smell and she didn't her buddy's new wild essence. Glad he didn't run away though, poor kitty must have been scared to death out there:)

Kathie, I think Breezy had some smell on him that was strange and frightening, when it wor off things went back to normal.

The sweet outdoor scents on Brezzy boys fur would have set her off. Or it could be a scary small. He also would have lots of fun things to tell her all about from his night on the town, so maybe it could just be jealousy.

A little late the the party here, but my guess would have been the smell thing too. It was great having Katdoc add some official vet knowledge to the dialogue. I learned a lot here!

I see my cats react to smells all the time. If one goes to the vet, the others stay out of reach for several days and shun the poor cat that went to the vet. Since that is usually my cat that the other two hate anyway, it makes it worse everytime she goes!