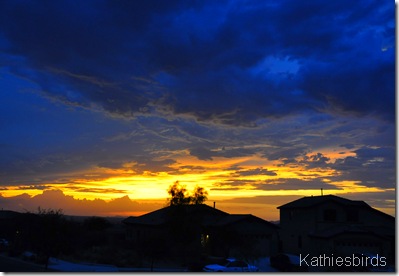 I have known for 2 weeks that this was possible but so much has been going on. First my son arrived for his last visit before he goes to war in Afghanistan, then my sister arrived for her 50th birthday. While she was here Gus went off for an interview in the Boston area for a new job. I thought we were going to make it here. We both thought we would retire here. We had made it past the three year mark by which we had usually moved. We thought our job was secure in spite of the downturn in the economy. We never thought this would happen. So, we bought a new refrigerator and installed a hot tub. Two weeks later the company my husband works for laid off 250 people. A few weeks after that the program he worked for downsized. He found himself adrift in an unstable situation. Thus his search was launched to find a new job. And so it was that while Alex was home and my sister was here that Gus was in Boston interviewing for a new job. 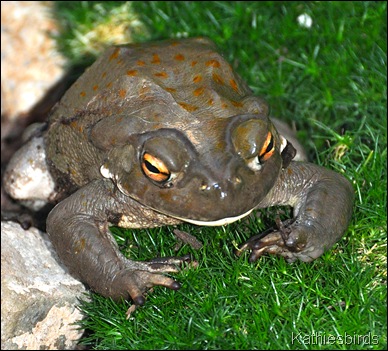 Gus returned the same night my son left. My sister left the next morning. Now here I am trying to memorize every moment, every bird, every sunset, every star-filled night. The Sonoran desert toad that pokes its head out in the evening makes me smile. Every hummingbird that comes to my feeder makes me wonder if there will be anyone to fill the feeders for them this fall when the fall migration starts and 5 to 6 species of hummingbirds stop by to feed on their way south. 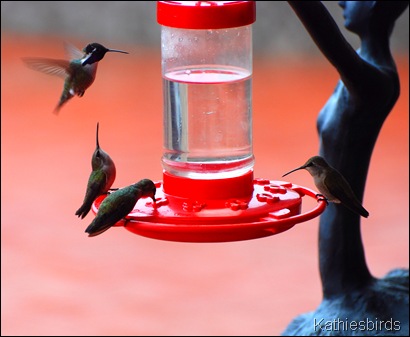 Last year I had a hard time keeping 5 hummingbird feeders full for their voracious appetites. Who will feed the hummingbirds now? Or the bats? 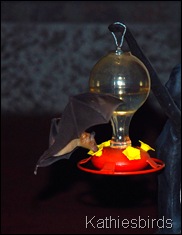 September into October is the migration of the Lesser Long-nosed  bats. The bats know my yard now. They know they can count on food at this location. Will there be anyone here this year to feed the bats? Will anyone else care if they have something to eat?

In an effort to make each moment count and in light of the current oil spill in the Gulf of Mexico I see how every bird count I do in this area matters. I cannot go to the gulf to count birds, though I would in a heartbeat if I could, but I can count birds here. 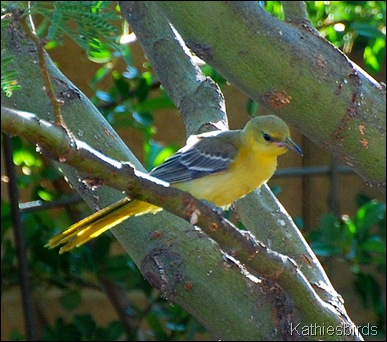 Already the bird populations have changed since I moved in here. Just down the slope from my house the building boom has resumed and there have been over 200 houses added to the once open desert where nighthawks and western kingbirds hunted in summer and raptors soared in the winter. This year the birds are finding their hunting ground gone, replaced by homes set cheek to jowl on hot paved roads where rabbits and ground squirrels succumb to overzealous and inattentive drivers. Where I used to hear great-horned owls on a regular basis, I have not heard one in a very long time. The birds are either moving up or down the mountain into more remote hunting grounds, but if the proposed copper mine goes in, all of this could change even more. The bird counts I do now will document how it was, in case it does change. In case our own version of an Oil Spill happens here. 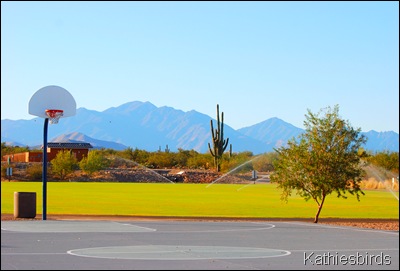 I was quite surprised when I researched my eBird records to discover that I have done relatively few bird counts in the greater Sycamore Canyon area. While I count birds almost every day from my own yard, my bird counts of various areas in Sycamore Canyon have not been consistent. Though I have lived here for over three years I was surprised to see that I had only submitted bird counts for the park area 23 times. In response to this knowledge I have been down to the park counting birds three times in the past week, and I plan on going more. I feel the urgency of collecting as much data as I can before I go. If I go. 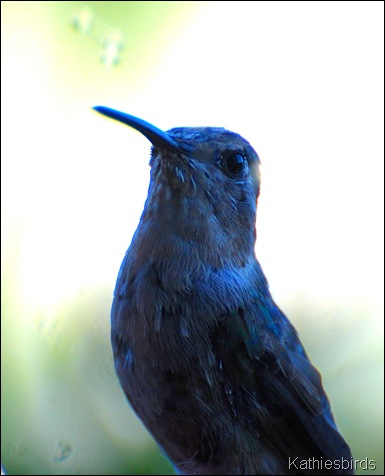 For now we wait. We will know in about a week what Our Fate will be. And then, I will really start to say  “Good-Bye.” 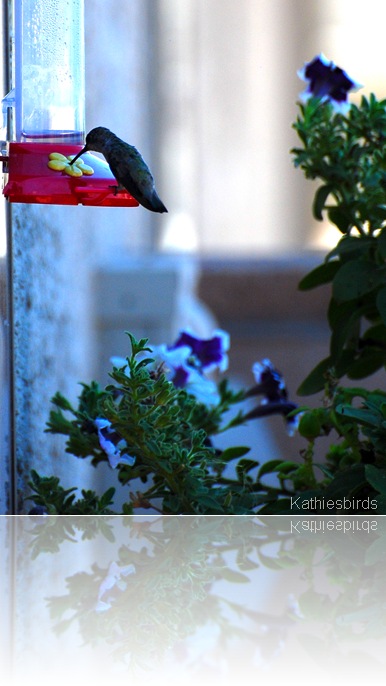 Being one of those people who tends to be rooted to a spot, this makes me all shuddery. But you sound like a person who always pops up upright when you roll. Boston is wonderful. Good luck!

Murr, thank you. We do this about every 3 years. I thought we were going to stay this time though, but then it all changed! It's the weather and all the birds that I am going to miss most, as well as the friends I have made here. I am trying NOT to think of snow!

Wow Kathie..big news for sure! I am happy that Gus was able to find a job in this difficult economy.

I know you will miss your Sycamore Canyon...but, you will love your new home where ever it is and find birds to watch.

Lots of great birders on the east coast.

Any idea what town you will be moving too?

I am too stunned to even comment. Wow. Although, it might be a good time to get out before people are living on top of you. Just keep your land down south! You'll be back! Good things will come out of this!

OK, wait a minute! How did I turn in to a woman! This is Tim from Oklahoma!

Dawn, not certain of the town yet, just the area, around Lowell and Tewksbury.

TR,aka cyclebuddhadoc, I would never have known who you were if you didn't tell me? I was wondering who this woman is that knows I have land! You crack me up!

I love it here and always will and with our pattern of living and moving it is not beyond belief that we will be back! But you know me, I will be birding and bloggin wherever I am.

Well Kathie I hope Gus gets some good news.
Moving on could mean new birds and new scenery anyway so its a question of making the best of it when it happens. There is usually something different to look at elsewhere.

Oh, Katie! I am as shocked as your other followers, but you have to do what you have to do! My husband's job is tenuous, too, at best, but at 60 years old, he would probably just retire if he got laid off.

Kathie - I'm so sorry to hear about Gus getting laid off. I haven't been keeping up with the blogs. And it's kind of sad to hear you will likely leave the area; hopefully, you will return some day. Arizona and New Mexico are beautiful places to live and enjoy the weather. I wish the best for both you and Gus.

I really am feeling for your, Kathie; not just words here on the net. I am wishing you both soft landings in a new job and a new home. Change is often not an easy task for the heart.

Having been laid off last March and with life a bit up in the air, I can sympathize. Good work on the eBird checklists. Documenting the species lets everyone know what is there and how much impact may occur when there is development. We don't know unless we count.

It's hard, when you've thought you've settled, to find you're on the move again.
Instead of Arizona being the destination, it's a stop along the journey.
Aren't you lucky to have had the wonderful time there!

Good luck in wherever life takes you!

Wow, I'm so sorry you have to move. I've moved so much in the past 10 years that I'm determined to stay put for at least five years. At least you're moving to New England, my favorite place on earth. Good luck!

Wow Kathie what a shock - I am so sorry to hear that you will be leaving Arizona. I remember you telling me how much Gus loved it. I hope everything works out on the job front for him and that you will both be happy where ever you land.

Kathie, I understand your concern about the hummingbirds and bats. I would be worrying about it, too, but you go on. I've moved out-of-state twice in 3 years and always found good roots. Sycamore Canyon is nothing like Boston! My goodness. I wish you a happy move, if that is what lies ahead.

Your photos are stunning, as usual.

Kathie, I just read your last two post. I have been reading your blog for a while now and have enjoyed your birding in Sycamore Canyon. I know you will find more great birding spots at your new home. Good luck with your move and I wish you and your hubby all the best.

Dear all my blogging friends, it is so nice to hear from you all and I thank you for all your encouragement and your kind concern.

Gus has not been laid off but he is making a pre-emptive strike so to speak to avoid being laid off. We have family back on the east coast so this will put us back closer to them. There is good and bad in every situation. I am excited to go, but sad to leave.

How can I not be sad to leave this beautiful and exotic place! But make no mistake, I am always ready for new adventures and change does not make me sad! Now that I write and ebird I can always find something interesting and exciting to do wherever I go and wherever I am. Birds are everywhere!!