The Fruit of the Land 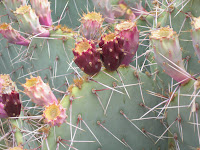 To eat the fruit of the land is to partake of the earth on which you live. In Idaho I ate potatoes gleaned from the farmers fields. In Connecticut I ate apples we picked from the orchards in autumn. Maine yielded wild strawberries and blueberries. Here in Arizona we gathered prickly pears and turned them into jelly.

On Thursday my friend Liz and I donned hats, grabbed paper bags and headed across the street to gather fruit. Though it was still early morning the day was hot and sultry. Our wide brimmed hats shielded our faces as we took our tongs and long handled forks to the fruit. We scouted out cacti bursting with pears and speared them into our bags. To pierce the fruit caused it to bleed a liquid the color and consistency of a nice Merlot. Picking the fruit involved twisting it off the green spine covered pad and hoping it would land in your bag. Liz used the tongs, which we discovered were the easiest method of picking, while I fumbled with the forks. One fork had two wide spaced tines that could slip beneath the fruit and pop it off, but then it would roll to the ground. The other fork had tines that were closer together and I used it in concert with the other to spear the fruit and hold it while the other fork popped the fruit loose.

We had no idea how much fruit we would need as this was my first time making prickly pear jelly. Liz has done it before, but not for a few years. The sweat poured down my face and burned my eyes with its saltiness, and still we kept on picking. We filled both bags three quarters full, then headed back to the house.

We washed the fruit in the sink, then loaded it into pots to boil, just barely covering the fruit with water. It boiled for 30 minutes, at which time we crushed it with a potato masher, then boiled it once again. When this process was done we strained the pulp through a colander to extract the juice, then we strained the juice through cheese cloth to extract any seeds or remaining spines. The result was a beautiful opaque raspberry colored liquid that turned clear like a gem when boiled with sugar to make jelly. The aroma of prickly pear soon filled the house as we processed pot after pot of prickly pears. It soon became evident that we had way over picked and we had more juice than we could ever process.

While Liz and I had both bought jelly jars, we had not bought enough sugar or pectin to process all the juice. I stayed with the boiling pots while Liz took a trip to the store to get more sugar and pectin. We filled every pot in the house with prickly pear juice. At one time we had three 6-quart pots with fruit and juice as well as two half gallon pots, 2 half gallon pitchers, and a 2-quart bowl with juice! We processed some of the juice into 28 jars of jelly, plus 6 jars of prickly pear syrup and we each kept 2 quarts of juice for later use!

The jelly jars look like gems lined up on the counter. The feeling of satisfaction is immeasurable. I don't quite know how to describe the prickly pear, for it really doesn't compare to any other fruit I have eaten. It's size and shape are somewhat like a Kiwi, it's texture is much the same also. The exterior of the fruit is cover in tiny hair-like spines; inside the flesh is deep violet-red. Here the seeds are arranged in vertical rows. The seeds are hard as stones and you would crack your teeth if you tried to eat them. The fruit itself is not very sweet, but its not bitter or sour either. It just needs a little sugar to sweeten it.

We ate fresh jeweled jelly on toast that very day. On the weekend I poured prickly pear syrup like blood over homemade pancakes. I have eaten the fruit of this new land and have incorporated its essence into my being. Perhaps my cells are made of Connecticut McIntosh apples, Idaho potatoes, Maine blueberries, and prickly pear fruit. Perhaps with these fruits as part of my being the memories of these places will linger until my brain is dead. Forever and always I will be a part of Sycamore Canyon, and it will be part of me, just like the other places I have lived in.
Posted by Kathie Brown at 3:38 PM

Beautiful writing, Kathy! You make everything sound so scrumptious! Awww, you HAD to remind me about the McIntosh apples!!! I miss them SO much, they are my absolute favorite apples, but I can hardly ever find them here. When I do it is a real treat. At least I know they will forever be a part of me :)!

Yes, Jess, Macs are hard to find outside of New England. They are Gus' favorite apple. In Utah I would only find them in one grocery store. I don't know yet If I will find them here in AZ.

I remember picking apples with your family when you were young. It is one of my favorite memories and Ah-h-h, the smell!

What is the name of that orchard up on Rt. 169 in Pomfret?