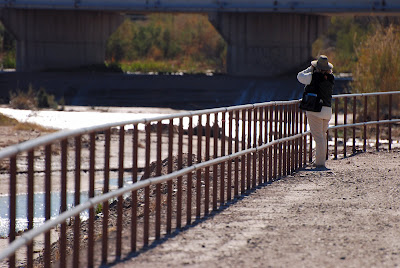 January 31
On the last day of January Gus took half the day off and went to the Santa Cruz River on Ina Road with me. The only time I had been here was in October of last year for my IBA training with Tucson Audubon and I remembered that we had counted 175 black-necked stilts. I didn’t have stilts on my Big January Bird list yet, so off we went. It proved to be a good choice. 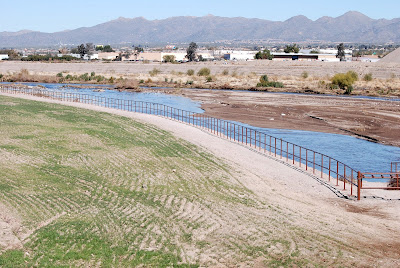 The Santa Cruz River at this spot receives a steady flow of effluent from the wastewater treatment plant, so while in other parts of Tucson the river is dry except during a rain storm, here there is a reliable source of water and the birds love it. 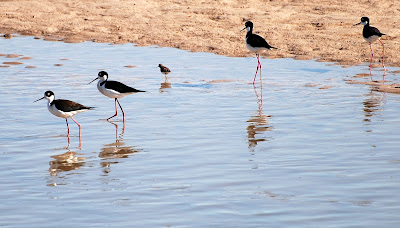 Besides the stilts there are numerous duck species, killdeer, least sandpipers, spotted sandpipers and a long-billed dowitcher. There are usually raptors here and we saw a red-tailed hawk and a kestrel, but no trace of the peregrines we saw on my last visit here. I would have liked to add that species to my count.

A spotted sandpiper searches for food among the rocks.

I thought of going to the Tucson Botanical gardens to see if I could pick up some other hummingbird species after Gus and I returned home and he went to work, but it was getting late in the afternoon and the thought of driving in rush hour traffic did not appeal to me, so I decided to stay home and take one last walk around my neighborhood. As I was getting my binoculars ready to go, I looked out my back door and saw a Pyrrhuloxia in the backyard. I had not counted one on my yard list for this year, so I waited 15 minutes and did a stationary count for eBird before heading out the door. I didn’t think much of it because I thought I had counted a Pyrrhuloxia in Saguaro NP East when I had birded there earlier this month with Gus. I was wrong. When I entered my bird counts into eBird late on the 31st I discovered this was the only Pyrrhuloxia I had seen this month! It was a final gift from the bird count gods! 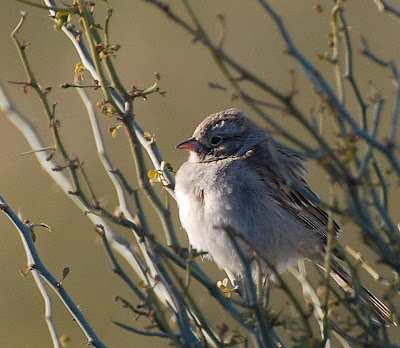 A Rufous-winged sparrow catches the last rays of a setting sun.

I am hoping to photograph the odd sparrow I saw with the flock of Brewer’s and rufous-wings I saw while walking the dog. Well, the flock has grown larger but I don’t spot the lone sparrow that was larger with a striped upper breast, an eye ring, striped crown and light malar stripe that curled around its cheek. With further research in 3 bird guides and rereading the notes I took, I am convinced it was a vesper sparrow. While standing there photographing sparrows, a Chihuahua Raven flies overhead. Smaller than a common raven, larger than a crow, the Chihuahuan Raven is found in more arid habitats. It has a higher pitched voice than the common raven and a much different call than the American crow. Notice the fingers on pointed wings and the wedge-shaped tail of the bird in flight. 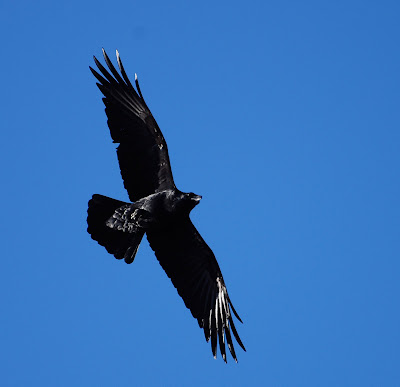 I enjoyed visiting your blog and learning about your bird count. I participated in a backyard bird count one year, but never seem to have time anymore.

In my yard this winter, I've seen cardinals, bluejays, common sparrows, a red-headed woodpecker, several chickadees. I enjoy the feathered friends that visit my yard. One year a blue indingo bunting frequented but I've not seen him since.

Thanks so much for visiting and leaving a comment on my Treasures to Me blog. The artwork on my site is mainly graphics. The header was created by my friend, Deena from Can I Be Pretty in Pink. If you go to my main blog, Mary's Writing Nook, my header was done by Mary from Isabella's Closet. Some I do and some are gifts from others. Some are just graphics that I pick up from graphic sites.

Take care. I do hope you will visit again.

I am glad to find your blog and know I will learn from and be inspired by your lovely pictures and text. You have such an abundance of birds compared to us at this time of year and I am able to enjoy them with you.

Thanks for visiting Hasty Brook. Your blog here is lovley and oh-so-birdy! I'd like to link here in my side-bar if that's OK. We visited the Phoenix area last spring and found we really like the area. Can't wait ti visit again.

Dear Mary, I certainly will visit again. Your Treasures site is lovely. I did check out your main blog briefly last night. I will peruse it more later today. I think I can recall seeing a red-headed woodpecker when I was young, but I have not seen one since so it's not officially on my life list. I'd love to add it! Thank you for visiting my Blog!

Ruth, so glad you came to visit. when I lived in the north we had few birds in the winters also, but ah, spring! It was always an exciting time for you never knew who would show up in your yard!

Lynne, thanks for coming! Of course you can link to my Blog. I've had yours for awhile because it is so beautiful. I think I found you off of Larry's Brownstone Briding Blog. I find lots of good Blogs that way. I pray you find a reason to smile today. You and your sister are in my prayers!