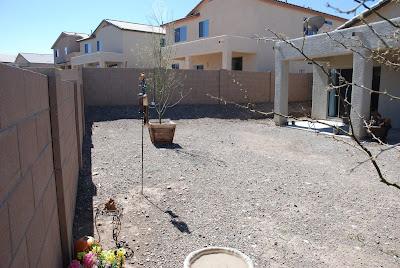 My son called form Presque Isle, Maine just as I was starting to write this post to tell me he had to climb out a window to shovel all the new snow away from his front door so he could open it! This is further reinforcement of why we now live in Tucson, AZ. While they are breaking records 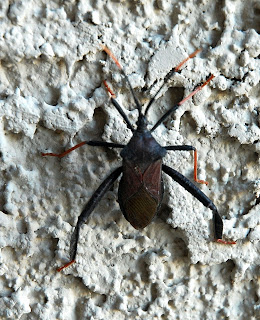 for the winter’s snow fall up there, we are basking in 80 degree sunshine down here! This insect showed up on my stucco this morning. Apparently it is enjoying the warming temperatures also. I'm sure all his buddies aren't far behind! (What is he Doug?)

All my plans for going to Coolidge and finishing my mural went down the tubes on Wednesday when the landscapers showed up at 7 a.m. We’ve had a plan drawn up by Robert from Magic Gardens Nursery on 22nd street in Tucson. After discussing our ideas with him he tweaked our ideas and came up with what we considered the perfect plan for our backyard. Work wasn’t supposed to start until around April 1st, but another job they were working on was delayed, and thus I found myself in an unexpected frenzy. 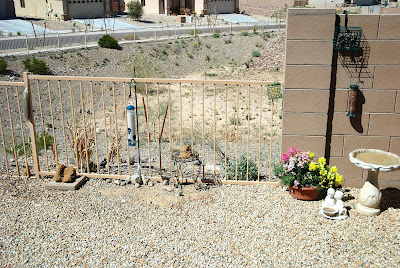 The night before I moved most of my bird feeders and the bird bath to the side yard in anticipation of the coming chaos. 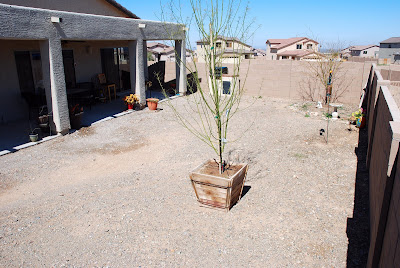 I snapped off some quick pictures of what it looks like before the transformation begins. 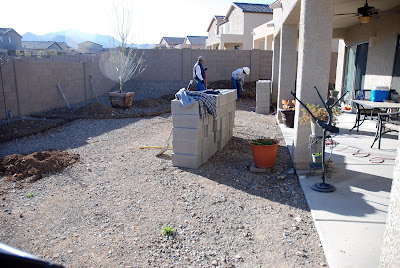 Sure enough, shortly after 7 a.m. on the 19th my backyard was full of 8 to 10 men using jackhammers and shovels to dig trenches for the footing for the intended sitting walls. The noise, hustle and bustle continued all day until 3 p.m. when they left for the day. However, the gas plumber came right as the masons were leaving to move our gas line for the gas grill. This needed to be done so the drain lines could be laid so the masons could finish their work the next morning. 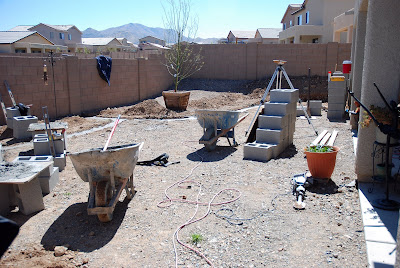 At 7 a.m. on March 20 the chaos started once again. Further progress is made as the drain lines are laid and the footers for the raised patio are put in place. The block walls built yesterday are covered in stucco that will cure for a about 10 days before the workers return to put a texture on it and lay brick in a herringbone pattern for the patio floor. There will be plants in raised beds along the perimeter and a brick patio covering the entire area from doors to sitting walls. 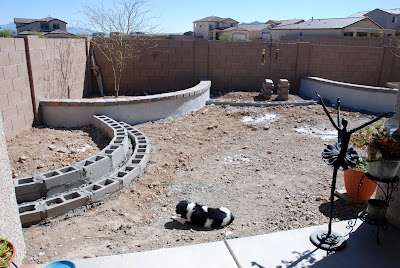 In this area we will have a raise patio to put a bar height table and stools on. This will allow us to sit and look over the wall into the wash beside us as well as watch the summer sunsets. In the evenings we will be able to see the lights of Tucson in the gaps between the houses. We are doing the work in stages with the masonry going in first, and the plants later as the budget allows. Finally, when it is finished we will have a fountain where the birdfeeder pole is located right now. 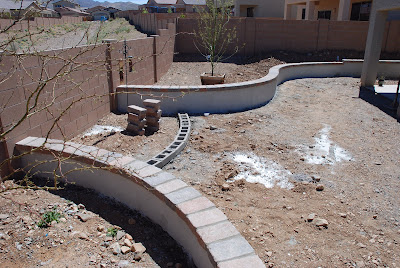 There's nothing in the photo to give me an idea of the size of this guy, so I'm not 100% certain. But I think it's a giant agave bug (Acanthocephala thomasi). Confront with this photo. It could also be a giant mesquite bug.

Well, first of all, I think your yard is going to look really nice. Now, my first impression was "stink bug", but Doug could be right. If you smell the big fellas breath and it smells like Kerosene it could be the giant agave bug. If he stumbles a bit when he walks then that pretty well cinches it. If not, then you might just be looking at a "hum bug".

Doug, he looks a lot like that photo you linked too. If the comments underneath are true, I'm sure glad I didn't mess with him. It was on the wall by my front door and I would say it is about the size of a silver dollar or a bit larger. Does that help?

Tex, I know stink bugs from living in Idaho and Utah, but I've never seen this guy before. He's kind of pretty though, don't you think? as for the yard, gus is so pleased. It makes all the hours of overtime he is putting in worth it. We will certainly spend much more time out there once the patio is laid and we don't have to walk on dirt! I can't wait to sit out there at night and watch the stars!

My first thought was a stink bug. Some of them here are large - maybe an inch long.

I love what you are doing with your yard! It's tough putting up with the chaos, but I think it's going to be dreamy. Landscaping walls add drama and style, soon to be filled with color. And a fountain should be a requirement in any garden. The birds appreciate them, too.

Any chance of your son moving to AZ?

Good luck with the renovations. We've always referred to the folks from Maine (including my brother) as "Maniacs," maybe it's all the snow that drives them over the edge!
Vern

This looks like a very ambitious project, but it's going to be a beautiful when you're finished. I envy your warm weather!

Several folks have mentioned stink bugs. That's both a colloquial and an entomological term. In an entomological sense, stink bugs are members of the family Pentatomidae. Your photo is clearly not from that group. It's a leaf-footed bug, family Coreidae. You can see the flattened, winglike hind tibiae, particularly if you enlarge the photo. At the sixe of a silver dollar, Agave Bug is a good bet. The other features described by the Texican are aslo good clues.

I'm excited about your backyard project and am eager to see more. Keep us posted!

You've been tagged to play the Six Word Meme!

You have your hands full with the renovation! I can't wait to see the finished shots! It will be beautiful, I'm sure. Not sure what the bug is, but I don't like it, hehe! Looks too much like a spider.

I love the arcs in the masonry walls: they're going to be gorgeous when engulfed with plants!

Central Maine is a little better than Presque Isle right now, but not by much. Tell your son I'll split the gas with him if he wants to leave now for AZ (smile!).

Mary, I don't think it's like any stink bug I've seen. It's body is too flattened. See Doug's comments as he is now my bug expert! I can't wait for the patio floor to go in, but at least now I can sit on the sitting walls and soak up the sun, which is exactly what I did on sunday afternoon! As far as finding a fountain, well, that is proving to be a challenge as I want one that will accomadate the birds but most I've seen so far have basins far too deep for little birds to drink and bathe! I saw one possiblity at a nursery this weekend but Gus said he wanted one that was more substantial. The basin was shallow and flat but the fountain part was sorely lacking! As for my son moving here, he tried that last Easter and it resulted in his divorce. He's now a single Dad staying close to his ex as they share custody of the kids. Too sad.

Yes, Vern, they are maniacs and I am married to one! And I can't wait until the dirt is covered!

Sandpiper, as always, wish I could send you some!

Doug, the only stink bugs I know of are black dung beetles. Their abdomens are rounder and they are smaller than this guy. I sure appreciate all your help identifying bugs. It adds a new dimension to my blog and I know there will be many more to show before the winter comes again!

Patrice, you can count on it!

J. Karl, it may be awhile before I get to that as I have a friend coming from Utah for a visit and we plan on birding almost everyday for a week, but I will check it out when I can! Thank you. Please remind me if it goes too long!

Aunt B, actually, it does have really interesting feet as Doug said. A Leaf-footed bug. Hum. Hopefully when the yard is done the birds and butterflies will share your opinion!

Kathryn and Ari, thank you so much. I truly think so. The landscaper has picked out some perfect plants but I keep finding new ones I want to include and as you can see, there really isn't the room!

As for my son, if I told him that he would probably take you up on the offer! Actually, he and the kids are suppose to arrive at the end of April when I get to show my grandkids a saguaro!

Presque Isle is quite a ways up there!-I've passed by there on the way to some of our fishing trips.Looks like a good project.-Hopefully I'll make some improvements on a smaller scale.

I've been as far as Fort kent. Maine is a pretty good sized state.-Some of our trips there have exceeded ten hours if you count the drive into the woods.