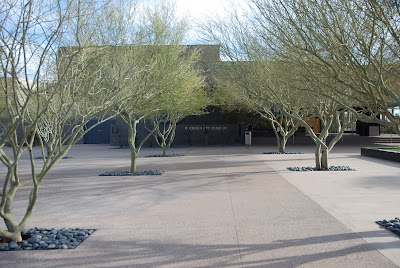 On March 11th I headed to Coolidge to join my daughter-in-law, Trish for a visit to the Phoenix Art Museum. On Tuesdays from 3 to 9 the museum has free admission. The traffic wasn’t too bad getting into the city but I was glad my daughter-in-law was driving since she knows her way around. Plus, right now there is a lot of road construction going on, which makes access a little more confusing, if not difficult. After parking the car we crossed the gridded pavement through a forest of blue Palo Verde trees to the entrance. Off to the right a fountain cascaded a sheet of water from an overhanging pipe where several people were gathered to enjoy the sound and the coolness on this warm day. Two girls were even laying right on the edges of the walls surrounding the catch basin. I’m sure they were being misted by the over spray. 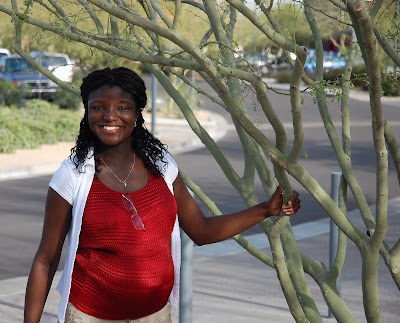 (Trish outside the Phoenix Art Museum, and Yes, she is pregnant.)
I brought my camera and camera bag into the museum and one of the first things I learned was NO FLASH PHOTOGRAPHY and NO PHOTOGRAPHS of artwork that is on loan to the museum indicated by the presence of an “L” before the catalog number. Then, when the guard told me I couldn’t bring my camera bag into the museum but I could lock it in one of their lockers I decided to return it to the car instead. It turns out I would never have needed anything in the bag anyway, so it was good to remove it before we even got started. We all those technicalities taken care of, we were on our way! 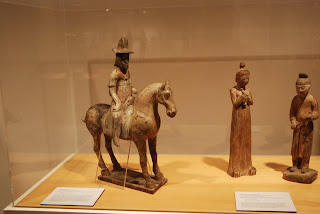 Trish has been here once before but it was all new to me. We wandered down the hallway past favorite paintings of her’s. This led us to the Asian Art Exhibit where we saw beautiful cloisonné, screen paintings and clay sculptures of gods and warriors. Having done a Haniwa sculpture in my 3-D art class in college I really enjoyed seeing these.


There was so much to see and I wanted to see it all, so I made the mistake of hurrying because I knew our time was limited. We strolled through European Art, Latin Art, and American Art. We investigated the Thorne Rooms which is a collection of Miniature rooms depicting period furniture and architecture from real rooms in the United States and Europe. 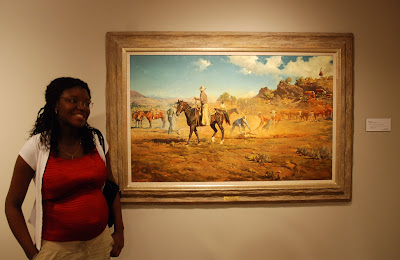 We saw western art, including a painting done by an artist from Casa Grande named Bill Owens. We happened to be passing by as a docent was giving a tour, and overheard that he was a real cowboy who taught himself to paint, and the most amazing thing of all is, he only has sight in one eye! 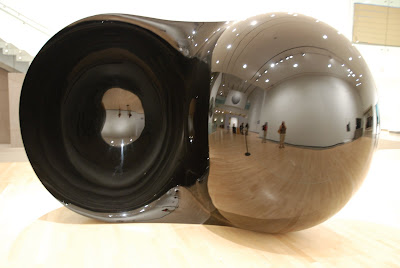 I particularly love sculpture, so I was fascinated by a piece called “Upside Down, Inside Out” by Anish Kapoor (2003). It took up the center of the foyer where you could walk all the way around and see yourself reflected in the black convex and concave curves inside out and upside down!

To try to describe the whole museum would be tedious and boring. You must experience art for yourself, so I will only tell you of my three favorite pieces that had a personal impact for me. On 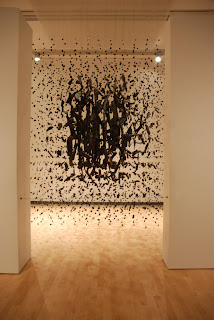 the second floor I was captivated by an installation piece where artist Cornelia Parker has taken the remnants of wood from a fire caused by a lightning strike. She strung the burnt pieces of wood on wire suspended from the ceiling in a grid. The installation is quite large and oddly beautiful with the blackened wood displayed against the white walls. The pieces are suspended so that they form the illusion of a box. It wasn’t until the next morning when I was writing about the experience in my journal that it occurred to me what the piece might be saying. Here’s what I got out of it: fire is a chaotic and destructive force. By displaying the burnt wood in this way, the artist has brought order to chaos and beauty out of destruction. You get to invent your own interpretation.


My other favorite experience that I will remember for a long time was another installation piece entitled “You Who are Getting Obliterated by Fireflies” by Yayoi Kusama. We had to wait in line at the open door to this blackened room. A guard stood at the door and only let 2 people in at a time. It was so dark that Trish and I couldn’t see and we grasped each other’s hands as we entered. After waiting a moment to adjust to the darkness we opened our eyes in a room painted totally black with mirrors on all four walls that reflected the LED lights suspended by cables at varying heights from the ceiling. The tiny lights constantly changed colors and the description outside said it was to give you the impression of walking through a filed full of fireflies on a summer’s evening, but for me, I felt like I was transported to the heavens and I was walking among the stars. I had no sense of balance or the feeling of the floor beneath my feet because everything is thrown off by the repetition of the mirrors. My emotions were heightened as we crossed through the darkness unsure of the exit point. I’m not sure I wanted out but I felt the pressure of others waiting in line behind us, so we exited back into the bright light of reality and went on our way.

My last moment of delight was discovered just before we left the Museum in the Harnett Modern Art Gallery. It isn’t big or impressive; in fact, it is quite small. I almost walked right by it as it was displayed in a glass case in the center of the room. We came around a corner from behind and all I saw was the back of a box with newspaper or something decoupaged onto the back of it. I really didn’t pay it much attention until I was across the room and I saw other people looking at the front of it. It was as I crossed to see for myself that it occurred to me what was before me. It was a Joseph Cornell box. Cornell was an artist I studied in college. He lived in New York City and never travelled far from his home though it was his great desire to travel. He 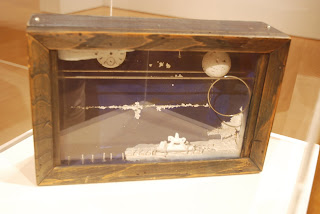 was bound there by the need to care for his ailing mother, and handicapped brother, so he would create these scenes inside of wooden boxes that he found. They weren’t dioramas of places but more like memories of imaginings or collections of dream and longings. Favorite themes of his were birds, butterflies, the ballet, and France. His style of art is known as assemblage and this particular box, though untitled by the artist, is one of many known as “Soap Bubble Set.” For me, it was the first time to see his work in real life and not in a book or on the Internet. I was thrilled.
Posted by Kathie Brown at 9:31 PM

Looks like you and your daughter-in-law had a wonderful time! Best of luck with the baby!

That was a grand tour. Thanks for taking us along!

Thanks for the tour.-I do like art and visit some art galleries.-I'm often not sure what the meaning of some paintings are.-I'd like to have a guided tour at an art museum some time.

I love pictures of paths and roads. They say so much without words.

Aunt B, it won't be long now before we are holding that little bundle in our arms! Thanks.

Patrice, I'm glad you came back to see the art museum. I thought you would like it.

Larry, I don't understand or even like all the art I see, but it's still fun to see. Art is so individual. Everyone gets their own meaning from it. A tour would be nice and you would learn a lot, but in the end its your own personal experience of the art that counts. Kind of like a walk in the woods!

Texican, I would say it proves the "a picture is worth 1000 words" adage!