Fire in The Rincon Mountains 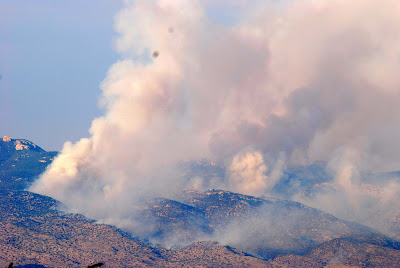 (Distillery Fire June 23, 2008 photo by Kathie @5:58 p.m. MST)
If you live in the west then you come to know summer as fire season. This was true in Idaho, Colorado, and Utah. It is also true here and over the weekend dry lightening sparked 2 fires at the south end of the Rincon Mountains. The Rincons are part of the Coronado nation Forest and Saguaro National Park, East. I see them every day from my back yard. They are part of the “place” where I now live. 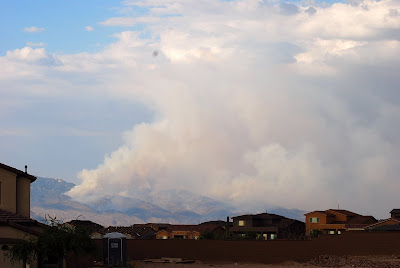 Yesterday afternoon the smoke billowing from the Distillery Fire filled the eastern sky. From my house these mountains are 10 to 15 miles away. The houses seen in the foreground are only the length of a football field away. According to the news last night this fire has grown to over 2000 acres but is being allowed to burn since it is not threatening any structures. It is being treated as a controlled burn that will help prevent more serious fires in the future. The Cumero Fire, farther east in Happy Valley is being contained since there are homes in that area.

Last night I experimented with the night photo button on my camera and took these shots of the flames creeping down the slopes in an ever widening ring of fire. At first I hand held the camera but that resulted in blurry edges to the flames. So, I set the camera on the stone cap of a pillar in the block wall and took the photo again. This is the resulting photo which I have sharpened but that’s it. 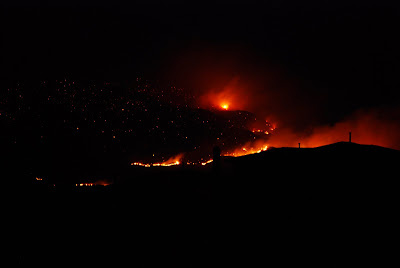 This morning when I woke up the air was flat with smoky haze that I could smell as I watered my plants and filled the bird baths. Look at all three photos to see the roof lines of the houses and make a comparison. 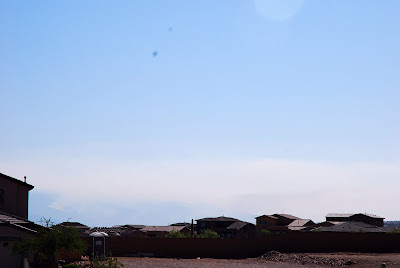 You will notice a dark spot on the image. That is a dust spot that is on my camera optics that I have not been able to remove. It is inside the camera and not the individual lenses since it shows up whether I am using the 18-70mm lens or the 70 -300 mm lens. Any suggestions anyone? I have wiped the mirror and top of the optics with a soft lens cloth to no avail. I certainly don’t want to damage my new camera but it is so frustrating to have this spot ruining my photos.

Update: As of noontime today the Distillery Fire has grown to over 4,000 acres. An attempt is being made to fight and contain the fire.

Good images! And what you got is sensor dust - since the cleaning of lens and mirror didn't make a difference.
Have one of these little blowers ready and then go into the Menu of your D80 - select the wrench symbol to the right and scroll until you see the menu item "Mirror Lock Up"
You have to confirm that action with yes - and then hit the shutter button.
Now you will see the shutter curtain removed and the sensor exposed.
Use the blower to clean as thoroughly as you can. Once done, power off the camera and start it again making some test pics.
Usually that does the trick. If not - you have to get some sensor cleaning stuff in a Camera store and clean it using that.
Cheers, Klaus

Klaus, thanks so much for that info! I guess you will be able to tell if I was sucessful very soon! In need to buy one of those blowers first though.

how scary to have the fire so close, but I guess that's part of living in the west. I'm glad Klaus helped you with the camera, that must have been frustrating to discover.

Wow- that night photo was magnificent!

Sometimes the camera store where you bought your camera will clean the sensor for you.

How is the tree doing with the black beetles?

Go back to my post on orange lichens. I have updated the post. I contacted the author and he identified the 2 lichens in my photo. These 2 lichens are actually on the cover of the Lichen book on order. How weird is that. Click on the Amazon.com link in my post to see the cover.

Beth, so far the fire is far enough away that I am not concerned at the moment. It would have to jump I-10 and travel west to get to me. The pervailling winds are from the west so that would blow it east. However, that could change at any moment! J-Six Ranch, Mescal and Benson are more likely to be in danger than I am.

shellmo, thank you. I was proud of myself for experimenting and getting it.

Troy, that is so cool. I'm on my way... Read below to find out about the tree (which is doing fine).

The little puffer should be cheap to buy. Sometimes Camera Stores have a service that can fix your dust spot also :) Last Summer was the first I can remember without fires nearby and having to close the house tight because of smoke and ash in the air. I hope yours burn out quickly because I know how it can spoil a season amongst other things!

Floods are scary, but I think wild fires are even more so. I hope that they stay far away from where you are Kathie! Keep us posted.

Nice pictures & post.
I hope the sensor dust will be gone with the remedy suggested.

Anon, if the monsoon arrives soon it will quench all these fires. But, ahead of the Monsoon we get dry lightening, which could spark more. So, it may get worse before it gets better.

Amy, so far so good. I will keep you all posted. Thanks.

Gallicissa, me too. Gus is working so much overtime right now that it make sit hard to get to the store. Perhaps this weekend we can accomplish that task.

Doug, all I can say is, "BAD BLOGGER!" I hate it when that happens! and Thanks for your comment!

Do you ever feel threatened by the fires? I've only been to Arizona once in my life. We flew into Phoenix and went north to the beauty there. I can remember driving back to Phoenix, on the Eastern-side highways and being amazed that we were driving through "brush" fires - at least that's what I chose to call them. The entire Phoenix valley smelled like smoke. Just surreal!

BTW - your heat almost killed me! My heritage must truly be from above the Arctic Circle! ;-) But the beauty of Arizona?? Indisputable!