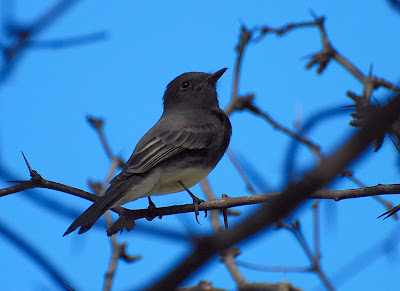 Black Phoebe, Blue Sky by Kathiesbirds 10-15-08
Click on photo to enlarge for best view.
The Black Phoebe is most often found around water where is perches on a low branch hunting insects. Like all Phoebe's it often "wags" its tail while perched. I saw my first one at Boyce Thompson arboretum last September and photographed this one when I visited this year. Uncharacteristically it was in a mostly dead tree in the picnic area alongside the currently dry Queen Creek.

Visit Skywatch Friday to view more amazing photos from around the world.
Posted by Kathie Brown at 11:00 AM

I hope you stop by at my SWF post also in HERE or HERE. Thanks

Beautiful shot, Kathie! Always nice to fine such a great birding photo on the SkyWatch list.

Have a great weekend!

I can almost hear its song !

A very, VERY blue sky. And a lovely bird.

Is this working now? Beautiful little bird; not very big looks like. And yes the sky is sooo blue! I would be singing my heart out too.

Beautiful photo - it looks like the phoebe is having its own 'skywatch'!

Beautiful picture Kathie. I spent slmost an hour watching a black phoebe on a beach in San Diego. It had chosen a stick that protruded about a foot out of the sand as its perch and was just feasting on sand flies and anything else that happened to pass - fond memories :)

Lovely SWF photo, Kathie. I'll have to ask my daughter if she's seen a Black Phoebe here (I've not.) I know we get transient Eastern Phoebes; I've seen them in our church garden.

I like the details on this shot and the bend bill end. Neat.

Oh nice, it's beautiful... crisp and clear details... it's as if it's right in front of me alive!
Have a wonderful weekend!
~Michele~
Mountain Retreat- Canada

Great shot.
We don't see too many Black Phoebes here in Ft. Worth. Have to go a little further West and South.

That is a very blue sky. I still love your header. That is a wonderful sight.

Sensational. You have a real sffinity with the birds. W have a rare garden visitor here, a grey wagtail which I'm trying to snap.

Great photo - I like the contrast of the two colors

Oh my gosh! Beautiful shot with that bird and the background of blue sky!!! One of my fave this week:) Mine is up HERE. Hope to see you there! Happy SWF!~

I love Tucson and the southeastern part of AZ. There are so many bird species and such beauty.
Your Phoebe is beautiful against the blue sky. :)

Hi Kathie, Super capture of the Phoebe against that beautiful blue sky plus the branches breaking it up. Such a coincidence that I saw my first Black Phoebe on my property this evening!

Nice bird, and against that pretty blue, it is even better!

I enjoyed learning about your phoebe. Nice photo.
Marnie

Three chirps for a great photo...

Bravo - these are cuties! You captured Phoebe well! (Love the name)
Cheers, Klaus

Very pretty. Have a great weekend.

Kathie that is a cute little tweety bird and such a true blue sky behind it.

Great shot. The contrast between the bird and the sky is perfect.
Cheers

It has got an interesting name.
It reminded me of the late Phoebe Snetsinger - the third ranked birder of the top worldlisters with over 8,400 birds seen!

I forgot to mention that we like the phoebes in general because they seem to be a greeting bird in the state parks. ;o)

PS: Some Alaska Sunday photos are up today.

It's an exercise in HDR Photography.

This is a great idea for Skywatch. Really, really special post. Subtle yet makes you stop in your tracks. You have so much vision and talent!