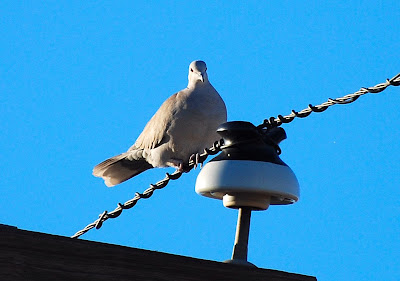 Some of my best times birding are spent looking for the hidden spots of the world. I find the most unusual birds and sometimes the most peace in vacant lots. They are undiscovered and abandoned places, full of mystery, trash and treasure, and if undisturbed for a long time, they are often the happy habitats of birds.

We have driven to Coolidge for the afternoon to spend some time with my son. It is football playoffs time and as the men settle in for their football game I wander out into the warm afternoon sun. As I pad across the pavement a Eurasian collared-dove eyes me from the overhead wires. 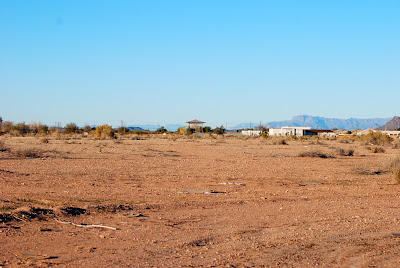 I glance across the flat expanse of desert before me. I use to find so many birds in this vacant lot, but today only jackrabbits scuttle up from the brush as I hike across the dusty earth. A lone Say’s Phoebe bobs its tail from the top of some desert broom. It has a vast terrain to hunt in, but it looks like slim pickin’s to me! In the distance I see the crumbling walls of the Casa Grande Monument. I head in that direction, but take a meandering path.

For the next half mile I see nothing other than mourning doves and grackles flying overhead but as I cross the road I start to hear the sounds of birds. In the two years that I have lived in Arizona I have watched the open land disappear as new neighborhoods and houses go in. Along with the neighborhoods come the new schools, and more land is lost to wildlife. Out here the west seems so big that the loss of a few acres doesn’t seem like it could matter much, but it does. Each little piece of earth is home to wildlife and as the habitat is fragmented and the humans become more numerous the wildlife moves on, moves out, or dies off all together. My son says he has not seen the little owl in the vacant lot I just crossed in a very long time. 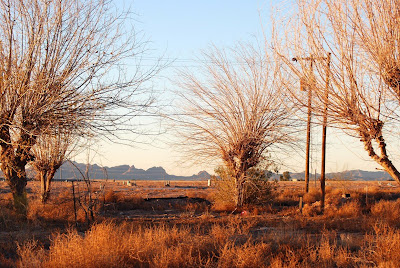 But I am here now, here in this wild and discarded place. A neighborhood is growing to the west of it. The curbs and roadways are already in. To the East a new school has risen since the last time I was here. How do they build them so fast? And right here where old trees tower, and remnants of another day lie discarded and rotting the trees and bushes are full of evening birds. 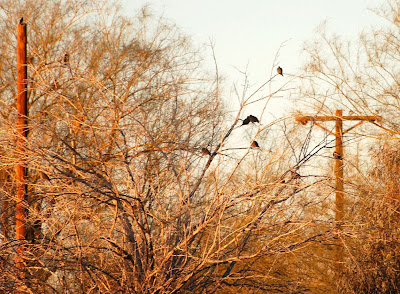 I walk soft as I can on the dried grasses. Leaves and sticks crumble and crack beneath my feet. Mourning doves make heavy silhouettes as they roost on utility wires and on the tangled branches of the trees. I stop to admire the scraggly branches that loom above my head. 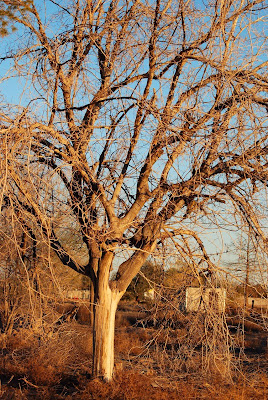 Why do I find the bare leaved trees so beautiful and sculptural? In this evening light their bark looks gilt with gold. 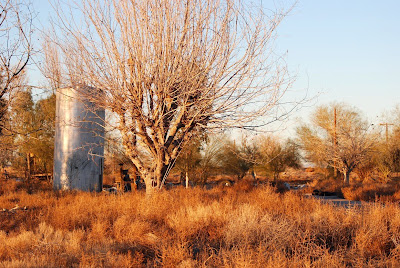 A silver silo rises up from the golden land, a monument to man’s discarded past. 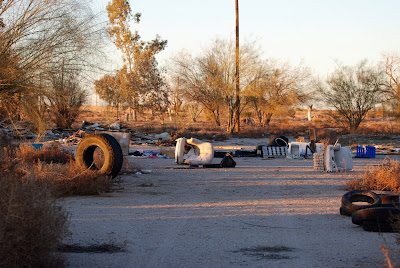 Farther down through the vacant lot I wander with yellow-rumped warblers singing me along my path. They don’t seem to mind the garbage strewn about their domain, but I start to wonder if I am safe back here. I’m quite a ways off the road. Would anyone hear me if I needed help? 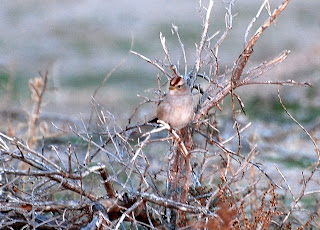 A flock of White crowned sparrows flutters by and lands in a thicket. Their thin voices call a soft “zeet zeet!” in the waning light. 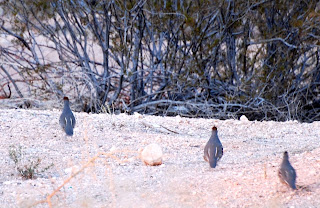 Then a flock of Gambel’s quail scurries across an opening. Everything about them says, “Hurry! Hurry!” but they have nothing to fear from me. How I wish I could communicate that to them. 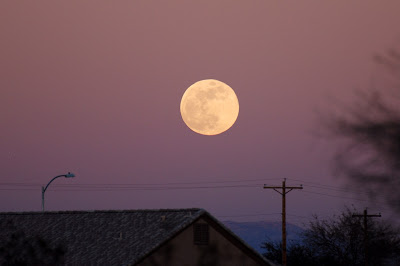 With the sun below the horizon the full moon rises in the eastern sky. It is a round balloon in a lavender sea. 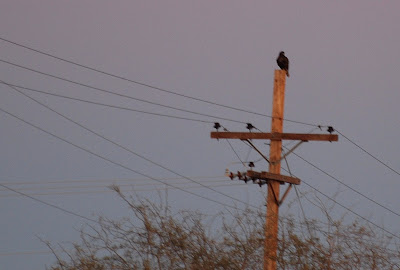 I know my time here is short now but I see a lone dark shape high atop a utility pole in the distance. I walk closer hoping for a better view but as I do clouds of mourning doves rise from the tree lined canal that borders the vacant lot and separates it from the Casa Grande monument. Wave after wave of birds rise alerting the hawk to my presence. It lifts on dark wings into the sky and vanishes into the night. 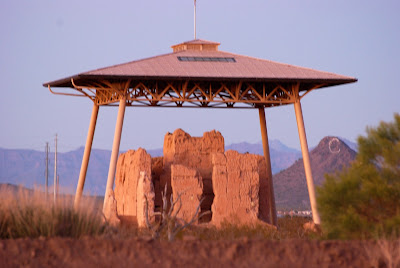 In the pale light that remains I gaze across the canal as if gazing across time to an ancient day when native peoples roamed this land and grew crops that they irrigated with water from the Gila River. The adobe walls of the Casa Grande Ruins are all that remains of those times and those days. I wonder what birds and wildlife lived here then?
As I head back out to the road the mourning doves settle down again to their nighttime roosts. There had to be at least 200 hundred of them, maybe more. As the darkness deepens I grow colder and a bit more concerned about my location. I call my son who comes and picks me up in the moonlit night. If the vacant lot is still here next time I return, I will come back again. The birds are waiting for me.

If you are participating in Big January just let me know and I will add your link to this list!

Scroll down to see Skywatch Friday: Coolidge Sunset/Moonrise
Posted by Kathie Brown at 7:30 AM

My favorite is the moon shot over the house. Love it!

Some of the shots look so golden,they must have been taken in that short time of evening when the light is'extrodinary'.Beautiful.
Blessings,,Ruth

That was fun taking the walk with you...nice photos!

Another beautiful walk with you. Too bad about the trash, thus it is for vacant lots. So close to the ancient ruins you can often feel their silent spirits.

Interesting post. I liked the roofed over shot a lot. What is it protecting.

Beautiful and thought provoking- thanks!

It is sad how we constantly encroach on the spaces that nature needs.
Beautiful moon shot with wonderful light.

Wonderful lighting in you photography! Warren and Lisa Strobel of Birdcouple Blog are counting their January birds.-They are at 78 so far and hoping to reach 100 species this month.-I added quite a few today. I may not post about it until next week because I still have Sunday to go-although snow is in the forecast.

Kathie, this post leaves me immesurably sad at heart. The speed of wrecking a landscape is the same for urbanization as for cutting down of old growth forests to bleed the last buck out of a dimnishing resource. It is amazing what, and how quickly, greed and modern machinery can wreck the earth.
Such lovely photos you have here and all I feel even with their beauty is an overpowering sadness.

Interesting post about an unexpected place for birds. I hope you carry a cell phone with you when exploring.

You have a lovely blog, and beautiful pictures!!