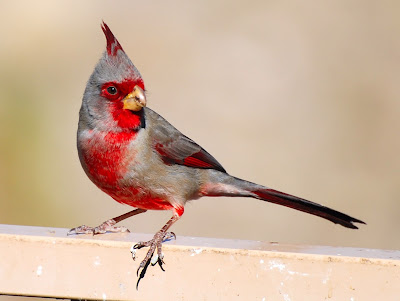 Pyrrhuloxia has to be one of the funniest words I have ever heard and one of the hardest to remember how to spell, but the bird it signifies is outstanding and one of the easiest to mistake for a female cardinal if you are not familiar with it. Pyrrhuloxias are found in brushy and arid habitats in the desert southwest. They sound and behave similar to Northern Cardinals and are often found together. 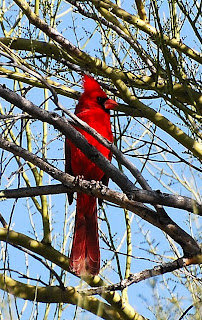 While most people can identify a male Northern Cardinal with his bright red plumage, black mask, and red crest, the female of the species can be more difficult to identify, especially when in Pyrruloixa territory. So, how do you tell them apart? Well, as seen above, the male Pyrrhuloxia is not red all over. The red is confined to certain areas of the body. The Phyrruloxia, whether male or female, does not have a black mask. Pyrrhuloxias have a short, stubby yellow beak. Cardinals have a red conical shaped beak, though the female cardinal's can appear reddish-orange. 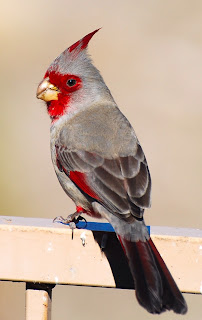 If you look at the photos above, you can see the difference between a male Pyrrhuloxia and a female cardinal. Though it isn't very dark the female cardinal still has a hint of the black mask around her beak. Notice how her beak is also longer, reddish, and more cone shaped. You can clearly see the yellow stubby beak of the male Pyrrhuloxia here. As an interesting point, the Cardinal Symbol used by the Superbowl challengers Arizona Cardinals have it all wrong. If you look at the Symbol they use, their Cardinal is depicted with a Yellow beak. Another case of Art trumps reality! 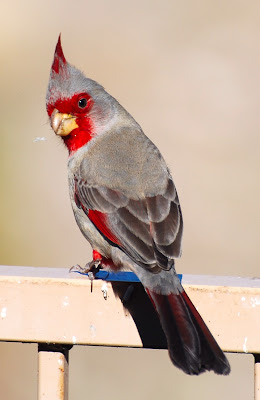 I had not seen a phyrrhuloxia yet this year but I knew they were resident here in Sycamore Canyon. On Thursday I went hiking in the wash with some new birders I met. (Come back for My World Tuesday to read about this hike) We did see one out in the wash, but it flew down behind some brush before I could capture a photo of it. I was sorely disappointed but we enjoyed ourselves anyway. Later, when I was back at home uploading my bird count into eBird I looked up to see a Pyrrhuloxia right outside my window in the bird feeder. I quickly grabbed the camera off the desk and starting snapping, but the bird was in the shadow and inside the bird feeder. Those shots aren't worth publishing here, but then, to my surprise and delight, this gorgeous male hopped out onto the fence in the sunlight and I was able to snap off several shots before he flew away. 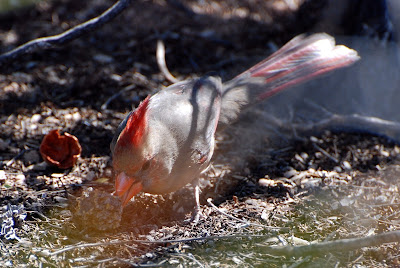 Update 1-31-09: I must have been on drugs when I posted the original title. It's number 107, not 207! Also, the pronunciation is "pie-rul-ox-ee-a."
Wikipedia's Pyrruloxia entry says: Its name comes from Greek terms describing its coloration (πυρρος = pyrrhos = reddish or orange) and the shape of its bill (λοξος = loxos = oblique, hence crossbill).
Posted by Kathie Brown at 2:00 PM

I like those side by side photos of the two birds that are so easy to confuse. The way I remember that the one with the yellow beak is a pyrrhuloxia and not a female cardinal is: Yellow begins with the letter Y and pyrrhuloxia has a Y in it.

I have never seen a phyrrhuloxia before and can see why it could get confused with a female cardinal. Great post and superb photographs. Enjoyed them very much.

Whatever its name Kathie, its a stunning looking bird.

Very interesting birding lesson, we see lots of Cardinals so it's nice to see the comparison.

Nice post. I'm not familiar with this bird and it was interesting to see the comparison.

Beautiful pictures - but don't ask me to spell that bird's name.

Nice comparison and photos of the birds. You've got some interesting species out that way.-what a strange name it has.

What a delightful bird! I can't say it, much less spell it! lol!

These guys and the Phainopepla have to win the prize for the hardest common names to pronounce! Very cool bird though. As always I love your photos Kathie - the birds must have known you were doing a post about them and came to pose for you on your fence :)

The Pyrr... bird is amusing, dressed like a clown. Very similar to the lady cardinal, but also obvious differences. I only get the cardinals. But my first of the year Plain Titmouse showed up yesterday. The pics are awful.
Thanks for sharing this new for me bird.

I guess we don't get these beauties here in the East. What a lovely bird...and definitely similar to our cardinals.
Beautiful captures!!

I've never been to Phyr (not even going to attempt the rest!) territory, but it looks like the best field diagnostic is the beak, yes? both sexes of cardianls have red, the P's have yellow in my field guide, and it look the same in your photos. Of course, sighting conditions have a lot to do with how well that works!!

What a beautiful bird! I wish we had some of your Arizona birds over here in our California low desert!

Kathie, it's amazing how these birds are located in such a small range (compared to many other birds). But it's certainly a treat when one sees a pyrrhuloxia. Great shots and so nice the bird accommodated you in your own yard!

This is a new one on me. I suppose there are dozens of birds around here that I never get to see. I think you know that I only photograph those birds that come into my backyard. That is a limiting factor to be sure. But I enjoy it that way. I wouldn't know what to do out in the wilds. My longest lens is 255mm and I see people are using 500mm lenses. I don't think I could even afford one of those unless I won the Ohio Lottery.

I do like the looks of this bird to be sure. It looks like something straight out of Europe.

my Memories
I wrote in my Memories blog about the roads of my youth and how they were to travel in the winter time.

Of course it's new to me and although it's a very attractive bird, I still think the Female Cardinal is more elegant.

The Pyrruloxia needs a nickname!

Those guys look like a love child between a cardinal and a parrot!
*From your favorite smart *ss*
: )

I automatically assumed 107.That would have been some number though!

That is one gorgeous bird! Can't believe how simliar it is to the cardinal - at first thought it was some sort of albino or leukistic cardinal.

Ruth, until I moved down here, it was a bird I only dreamed of seeing. Now it's a backyard bird for me!

Diane C. What a creative way to remember!

Denise, glad you liked it. Thank you very much!

Elaine, thanks for stopping by.

Vickie, You would have to come west and south to see one.

Bobbie, I won't. It's taken me a long time to learn to spell it. I have to remember not to put the "H" after the "P" and then there's that double "rrh" thing. It's quite a job! I think they use this word in spelling bees quite a bit just to trip people up!

Larry, there are so many interesting and unique birds out here but this spelling has to take the (seed)cake!:)

A New England life, thank you! How nice to see you again.

Celeste, I agree with you on the names thing. I don't know alot about insects but this was fun to see and always soothing to be out in the frsh air first thing in the morning.

Gaelyn, Well, I don't believe I have ever seen a plain titmouse before, but aren't pyrrhuloxias in the Grand Canyon? I would think you should see some there this summer.

Deborah, the beaks are one of the best field marks, but I just found out Saturday that the two species do inter-breed and well, then it makes postiviely identifying them really difficult!

desert horses, I'm bet you get some that I don't.

It's time to live, it was actually chilly that moring. I had on 4 layers of clothing with a tank top, long-sleeved shirt, fleece vest and a jacket. I had gloves on at first but eventually it warmed up. By Saturday I was back in a tanktop and enjoying the sun!

Mary, my jaw literlly dropped when that pyrrhuloxia flew in. I had not seen one at the feeder in months and I have not seen it back since that day.

Abe, You do so well at photographing your backyard birds. The fact that you enjoy them so much and that you enjoy taking their photos is all that matters. And I know lots of people enjoy the birds you show them. I shall come over and read your memories soon.

Mary, I like them both but I agree about the nickname! Pyro sounds a bit dangerous though.

Susan, the beak is often referred to as a parrot-like beak, so you are right on there. I think they use it in a similar way. I'm so glad you stopped by!

Shellmo, Isn't it pretty? I can see how you would think that.

Beautiful pictures, as always! I especially liked the Ravens - never thought they could look so beautiful. Our Baltimore Ravens, well, that's a different story! :)

Sorry about the Cardinals...

Big January update: We closed the month with a modest, but fulfilling, 87. Work gets in the way sometimes.

Anyone up for a big January-February?!!