My World is a World of Wonder 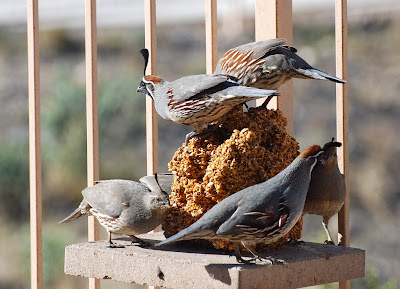 Gambel's Quail 2-16-09 Corona de Tucson by Kathiesbirds
My World is a world of wonder. A world where birds greet me with merry chirps in the morning and sweet twitterings drift through my open window letting me know that I am alive and life is good. I smile to see the quail at the seed block, jockeying for position in their own version of King of the Mountain. 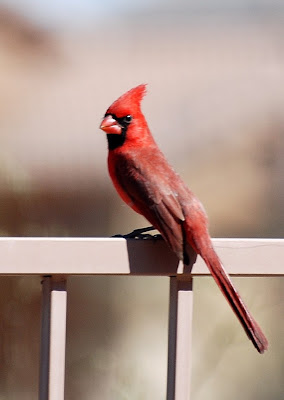 My World is a world of color where red Cardinals... 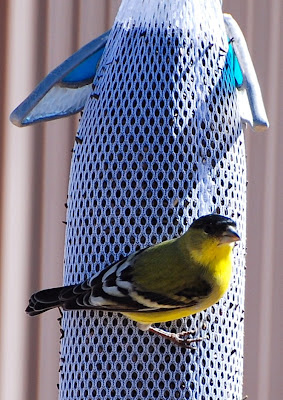 ...and yellow Lesser Goldfinches come to the feeders, 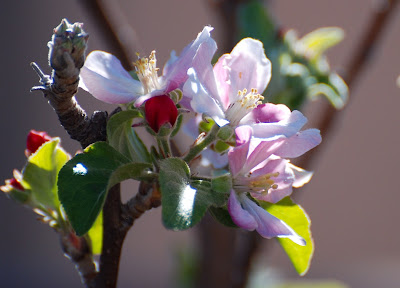 ...and where pink apple blossoms open with the promise of spring. 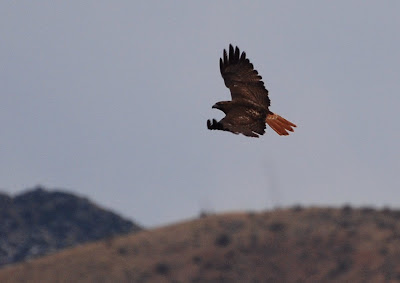 In My World of Wonder a Red-tailed hawk soars over the Santa Rita Mountains scooping my spirit up in its wings and carrying it high into the steel blue sky.
In My World of Wonder the amazing thing is when wonder creeps up on you unexpectedly, like it did on Saturday in Rio Rico where Gus and I scoured the countryside counting birds for the Great Backyard Bird Count. On the slopes of the San Cayentano Mountains, at a place we call Hawk Hill, the only birds we counted were two ravens and a Red-tailed Hawk. Every time we come here it seems there is one sitting on the utility pole, which is why I call this place Hawk Hill. It is late in the day as we arrive and we watch as the shadows deepen and fall across the valley only to swallow the hillside in darkness around us. We drive into town for a restroom break, and then, we return to watch the city lights from the mountainside as darkness descends.
As we drive up the dirt road in twilight our headlights illuminate the gravel road before us. I am still looking out the windows for birds when I see a thick shape at the top of a utility pole. I tell Gus to stop the car, because I think there is a Great Horned Owl up there, but at first he doesn’t believe me. He thinks it is the hawk. He stops the car so I can look through the binoculars at the large mass of feathers perched above us. Its thick head and neck with ear tufts reveals it to be just what I thought it was, a Great-horned Owl. I pass the binoculars to Gus so he can have a look, and as we are both watching through the windshield of the car the owl raises her hind end as if to vent when suddenly like a ghost another owl appears out of the dusk. Its wings form a massive canopy over the female as he lands on top of her fluttering. I think he is trying to get a foothold on the same pole as her before it dawns on me that I am witnessing the mating of two Great Horned owls! It is all over in less than 20 seconds and he is gone like the wind in the night. The female lowers her rump to the pole and assumes her upright perched position again. Gus and I sit there in wonder as we realize what we have just seen.
Though we try to get a photo of the owl on the pole, by now the darkness has deepened and she is too high up for even the flash to register her shape. We put the car in gear and continue up the mountainside to our favorite lookout spot. High on the side of the mountain the Rio Rico valley sparkles below us. We can see the lights all the way to Nogales and I must say the city lights have never twinkled so brightly. No wonder those owls had romance on their minds!

On Sunday I count birds in Corona de Tucson. I count birds at the schoolyard where I find a flock of Lark sparrows and one sweet-faced bird hops up for a look. Across the street I hear Killdeer call and then watch in awe as four white-bellied birds fly overhead, but it is the memory of the owls that lingers in my mind. So, I drive up the road to a steep dirt bank where I find another Great Horned Owl in a little cave. 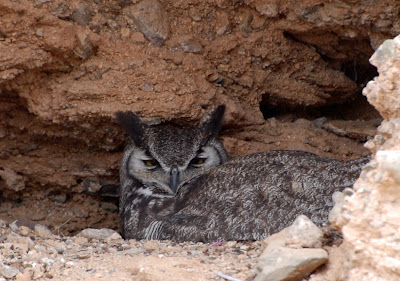 Last year she nested here and raised a brood of 4 little owlets. Can she be sitting on eggs again already? What a Wonder that would be! I will check back on her again in a week or two, but as I drive away I am recalling the events of the night before and the wonder I felt as the phantom of the night flew in on silent wings to woo his mate.
GBBC Update: All of today's photos we taken during the GBBC and were birds that I counted and submitted on checklists. I missed counting most of Friday due to Doctor's appointments and other errands, but I counted Birds all day long on Saturday, Sunday and Monday. In the end I submitted 1 checklist for Tucson, 1 for Sahuarita, 8 for Rio Rico and 18 for Corona de Tucson. Last I checked I had submitted the only count of a Fox Sparrow in the whole state which I found scratching in the leaves under a tree near the Rio Rico ponds. I didn't get a photo because Gus had the camera and was photographing the ducks in the pond. It was a red variety and the first Fox sparrow I have seen in Arizona so it went on my Arizona Life list!
Posted by Kathie Brown at 9:20 PM

YOU HAVE CARDINALS??? Obviously you do. I know we don't have them here. Is it an altitude thing? I thought it was a western thing.

Kathie, as always, a wonderful post. I look forward to your bird outings. I'm in awe of your Great Horned experience. What a rare peek into owl life. Sure hope the cave owl nests and allows you to photo discretely.
Blossoms already? I was worried about snow last night.
Do you have deer bother the Quails seed block?

Lousie, Cardinals are the AZ state Birds. I don't know if it is an altitude thing. I shall have to check and see what I can find out. I suspect it is more habitat. Cardinals like berries an seeds and they need a lot of cover.

Gaelyn, I have only seen deer in Sycamore Canyon once and they have never come into the neighborhood or my yard. I have rodents and jack rabbits that eat my seed block and so have just recently elevated it to the stand. The packaging recommends this to keep the javalina away but I suspect they would just knock that thing over. I have yet to see a javalina myself!

How is it owls always look so warm and cuddly?

Sure do love that cardinal!

You get the coolest birds! Love the red tailed and owl pictures.

Congrats on all of the hard work you did w/ the count!

Kathie, your world will always be a world of wonder, because you have the gift of joy in the world God made. Too many walk through the world without noticing its wonder.

And yes, Sandy, owls do look soft and cuddly - but don't get too close!

"the amazing thing is when wonder creeps up on you unexpectedly" -- exactly right!

Beautiful photo of the hawk, and I would have loved to have seen that owl.

Yours, is a very nice World Kathie.

I could feel the excitement as I read your words.The beauty and wonder of creation always sends shivers up my spine.
Blessings,Ruth

Love that first photo of the quails. That's the first I've seen of them. Your world is indeed one of wonder.

That was a wonderful post! I could just see those owls in my mind. How lucky you were able to observe that!

I too was stunned that you have cards. Amazing. This was a beautiful post from the first word to the last; it needs to be published in a print mag. The photo of that little owl is precious. (if owls can be precious....)

More great variety - don't those quail look cool! What a sense of humor mother nature has!!

As always Kathie your birding trip sounds fabulous and what a wonderful treat to see the mating owls, a rare thing indeed. Great work with the GBBC I am sure your extensive reports will be very useful for the data base. - Love your pictures, as usual :)

A wonderful collection of fascinating birds. I enjoyed hearing about them.

Bring some of your birding luck to the New River Festival. I'd love to find some really different birds with you there!

We used to check under our chickens for eggs--I guess waiting to revisit her is probably the safer method with a GHO!

So much beauty in your world! Those quails looked like they were enjoying themselves on that seed block! ANd I loved seeing that owl laying in that little cave - I hope there are baby photos in our future!

Cardinals are on the list of birds I want to see in the flesh. So other worldy to me.

Kathie, this is a wonderful post! Your passion for not only birding, but writing, is beautiful. Enjoyed every word and picture.
K

It sounds like you've had quite an adventure with your GBBC. I love the owl picture at the end. She looks so content, yet you know she is on-guard.

I love those pictures of the Quail at the feeder. AND the Great Horned Owl in a cave. Thanks for sharing.

Your February yardlist includes about a half-dozen would-be-lifers for us Easterners!

All the best
Warren and Lisa

Love the quail on the seed block :-) That owl is lovely...great shot!