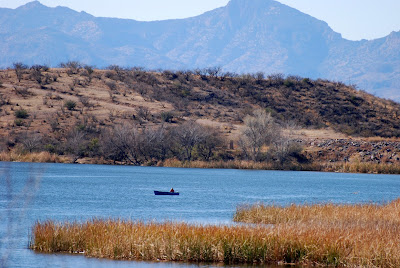 In MY World today the air is chill and damp with the moisture from yesterday’s rain. A cold wind blows with the promise of snow in the desert later tonight and tomorrow. I fill my bird feeders in preparation for the promised snow which brings my first Pine Siskin of the year to my yard. What a change this is from last week when we had two days of temps in the 80’s. It was a week of warmth that started on January 31st when we were at Patagonia Lake State Park in search of the Elegant Trogon. There we saw the first blush of spring as new leaves burst forth from the swelling buds of a cottonwood tree.

Patagonia Lake State Park lies in the southeast corner of the Arizona just east of Rio Rico. The 265 acre manmade lake was formed by damming Sonoita Creek as it flows through Patagonia southward to join the Santa Cruz River. With camping, swimming, hiking, boating, bird watching, horseback riding, and fishing allowed the park can become crowded in the summer months, but at this time of year it is more peaceful as we pull up to the visitor center and park. 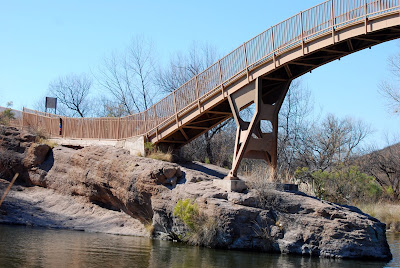 Gus climbs the high arched bridge that crosses the channel from the boat landing to the lake. The view from above is worth the steep climb. 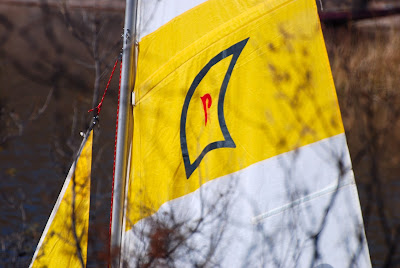 A sailboat floats gently by in the calm blue water. 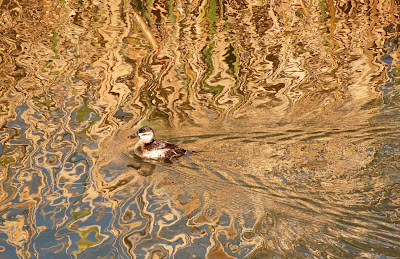 A female Ruddy duck paddles calmly in water that looks like burnished gold from the reflected winter-dried reeds. A pied-billed grebe dives into depths of blue, resurfacing again not far away. Coots cackle and squawk in the reeds and a moorhen crosses the channel below, only to turn and head back to the original side a few minutes later. Out on the water people are enjoying this sunny day in canoes and kayaks and low wake motorboats. 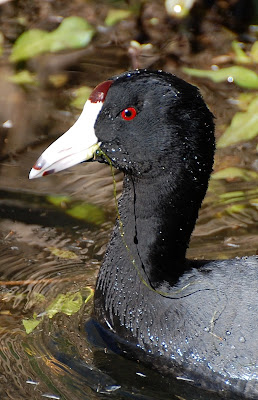 We return to our vehicle and drive to the east end of the lake where the birding trail begins. After parking the car we head down the well worn path. I am alert at all times for birds. We hike along the high rim overlooking the lake, then descend through the barbed wire gate to the bosque below. The trail wanders past the marshy east end of the lake. Coots call from the rushes and cattail. A black phoebe chirps from a twig. 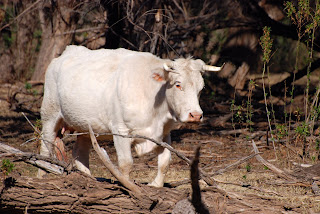 Cow pies litter the ground, evidence of the bovine creatures that we later find wandering the trails. They look at us benignly and continue on their way. 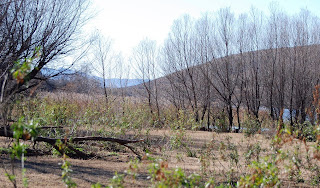 Most of the trees are still naked, with the faintest blush of green just beginning on some. I feel the barrenness of promise in their stark naked limbs. 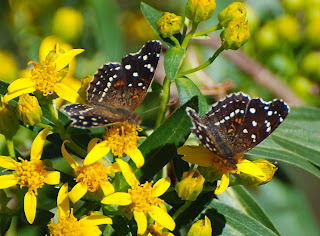 A few ground plants are ahead of the game with foliage already a foot or two high and yellow blossoms already attracting butterflies and other winged life.

While there is no sign of the Trogon, a bird I have yet to see, the bridled titmice and plumbeous vireos flutter about the treetops and hop from limb to limb. Ruby-crowned kinglets are numerous and busy gleaning insects from the twigs and in the calm waters of the east end of the lake a flock of 30 mallards naps lazily in the sun. 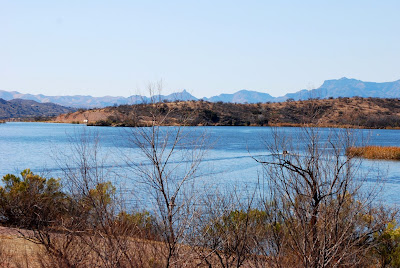 Our time is growing short. We do not stay very long. I only count 24 species of birds today. Last year when I was here in March with my friend Kathryn we counted over 50 species of birds in one day at this State Park. Though the park rangers told me the Trogon was spotted here just yesterday, we have not seen beak nor feather of it. As we head out of the birding trail. Gus encounters two men who tell him they spent 4 hours searching for the bird earlier this morning. They took a break for the afternoon, and are now on their way to try to find it once again. My search will have to wait until another day, but one day soon I hope to find one and capture my own picture of the Elegant Trogon. 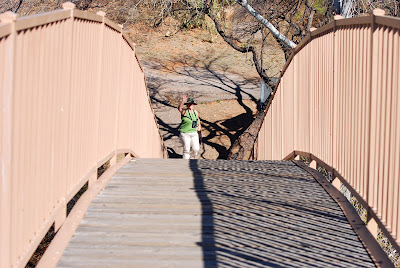 I hoped you enjoyed a walk in MY World. Good-bye!
Today's Photography courtesty of Gusto!
Click on any photo to enlarge for the very best view.
Posted by Kathie Brown at 6:09 PM

What a great visit! Thank you for sharing your world!

Well, as nemesis birds go, that one has a lot of class. Happy (and successful) hunting!

Looks like an outstanding park, thanks for the tour and great pics by the way.

Have a great week!
Guy
Regina In Pictures

Your world is simply perfect. I cannot get over the fact that you have butterflies. I have not seen those in months. So pretty.

I love the picture of the ruddy duck. The coot with the ripples in the water is really nice too.

Kathie, I wish I were with you like last year. That was a great day! We had 12 inches of snow today, more expected overnight. I ruddy duck and coot pics are outstanding!
Love, K

That bridge is awesome!

I just loved this My World post. I haven't thought of Lake Patagonia in years. Drove around the lake with my hubby in the 1970's. It looks like winter there now but those beautiful butterflies are definately a touch of SUMMER!

The Good Life in Virginia said...

what a wonderful post of a very nice lake/park. you are very lucky to have such a lovely facility to get out and about in.
enjoyed your photos :)
have a great week.
erin

This looks great! I just added it to my list of possible places to go :-) I really looking forward to the nice weather!

cheryl ann, thanks for stopping by.

Wren, One of these days I'll get it!

Guy D, glad you liked it!

kallen, thanks. I can't get over butterflies in winter either.

Kathryn, thanks. I don't know if you'd want to be here today. It's cold and we have snow also! But, you are welcome any time! I'd love your help searching for that Trogon!

shutter happy jen, thanks for your visit.

Jack and Joann, glad to bring those memories back for you!

The goodlife, we do live in a lovely place with so much to see and do.

Mary, I hope you have a great time there. Call ahead to reserve your spot on one of the boat tours. It's only an hour long and well worth it but they fill up fast at this time of the year.

I've only ever been to Patagonia Lake once. It was summer, and crowded. I really liked the photo of the Texan crescents (Anthanassa texana). It's a species that I have not often encountered on my trips to Arizona, though it's supposed to be reasonably common.