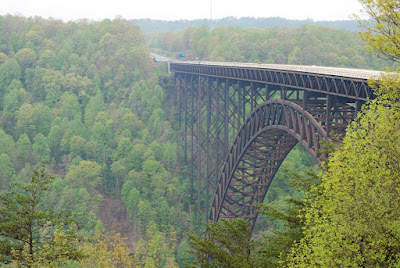 The New River Gorge Bridge in West Virginia was the longest single span arch bridge in the world until 2004 when the Millau Viaduct opened in France. The bridge itself is 3030 feet long and the span of the arch is 1700 ft. Lying 876 ft above the New River it doesn't look like much when you drive across it but the real beauty is seen from the side and below. This shot was taken from a viewing platform at the visitor's center in Fayetteville, WV on my recent trip to the New River Birding and Nature Festival. While the first 2 days were sunny and bright, the rest of the week we were shrouded in clouds and showered with rain. Mist and fog rolled off the hills and mountainsides and I often felt like I was living in the clouds. This area is often called the Costa Rica of America and it certainly felt and looked like a Rain Forest to me! 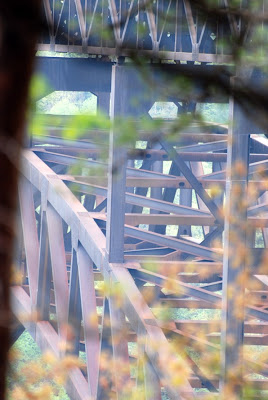 I was fascinated by the beauty of the structure and the latticework of steel that lends support to the bridge. It occurred to me that this is what the birds must see as they go flying by... 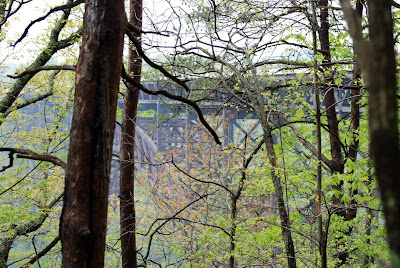 ...not unlike the latticework of branches as they sail through the trees! I saw or heard 106 species of birds while here and added 27 species to my Life List.
The New River Gorge is famous for BASE jumpers which gather here one day a year to jump from the steel span. Called The Bridge Day Festival, the bridge is entirely closed down as participants leap off the structure into the gorge below as well as engaging in other extreme sports. Click on the link to read the official Bridge Day History and Facts.
The New River Gorge is where you can find the Big Bend Tunnel, which is the reputed location of the legend of John Henry. A steel driver, John Henry and his partner were pitted by the railroad bosses in a contest between man and machine to see which could drill farther and faster. Reputedly John Henry and his "shaker" won, but he dies with his hammer in his hand from the exertion. (Click on the link to read the full story.)
It is also the location of the worst industrial disaster in American History when, in 1930, hundreds of workers were killed either by accident or by breathing the silica dust from the drilling the 3 mile long diversion tunnel for a Hydo-electric plant on the Kanawha River. Called The Hawks Nest Incident, the silica dust acted like ground glass in the worker's lungs causing difficulty breathing and ultimately death. Since this was not a coal mine it was not subject to the same regulations and safety precautions as coal mining was. Most of the workers were African Americans looking traveling the country looking for work during the depression. Unnamed and unknown, the companies involved denied the problems and pushed the men to keep on working. When anyone died they just replaced them with the steady stream of desperate workers. In the end it is estimated that between 700 to 2000 men died before the tunnel was completed with many more sick and disabled. (Source NPS website)
Posted by Kathie Brown at 10:00 AM

A beautiful bridge in a beautiful setting, Kathie. thanks

I missed hearing the John Henry connection, but the rest sounds familiar. I like that unusual and artistic view of the supporting lattice beneath the bridge.

I saw a sign at Hawk's Nest about the accident....horrible.
I never went "below" the bridge to get any photos. It was enough that I didn't pee my pants or faint while driving over it. :)

Kathie, a lovely post, and so well researched. Is that where th hillsides are covered in Liliodendron trees? I think I have seen this magnificent bridge before.
Have a great week birding.

Wow, the vegetation is so thick! The bridge just seems to appear and disappear out of it like magic!

Wow...amazing what the government doesn't put in the history books. Great pictures.

Gaelyn, it was good to refresh my memory about it! Amazing stuff!

Bobbie, it is breathtaking!

Thanks Wren! I learned about the John Henry Connection when I was researching the bridge!

Susan, you probaly could have done the boardwalk at the visitor's center. It was amazing and I only went halfway down. Firm footing all the way. I'm proud of you controlling, if not conquering your fear of bridges! You did well!

Arija, Do you mean Rhododenron bushes? There are a lot of them around this area. The Swainson's warblers like to live in them. We saw them all over the place but they were not in bloom as of yet. I was contsantly enjoying the dogwoods and redbud trees though.

Deborah, yes it does!

King of the New York Hacks, it's sad that this story is not in the history books. I had to find most of it on the internet. A sign is posted at Hawks Nest about the incident, but that was it.

I hope you'll stop by and pick up an award I have for you.

You have done your homework and deserve an A+++! Since I'm always pressed for time, I thank you for this research. Lovely. I did not see the bridge from your view, so I appreciate these wonderful photos.

Geeze-that was a terrible incident.-I love hearing old legends like that.-You wonder what part of them are actually true.