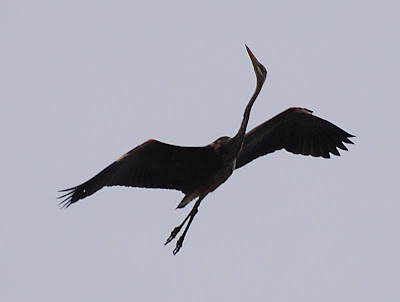 Great Blue Heron in West Virginia 4-30-09 by Kathie Brown with Nikon D80
I recently returned from a trip to the New River Birding and Nature Festival in West Virgina. While there we saw this Great Blue Heron come flying overhead while we were on the High Country Birding trip. While most herons fly with their necks bent in an "S" curve, this bird was flying with its neck extended. As it circled lower a large fish could be seen sticking out of its throat. This series of photos was taken as the bird circled overhead. I suspect it was a juvenile by the brown streaking that can bee seen on its breast and belly. Perhaps it swallowed a bigger fish that it could handle. Perhaps it wanted to land at the nearby pond we were standing by and get a drink to wash it down. Scroll down to see the bird as it flies with it's neck bent, then extend it as it tries to fly and swallow. If you look closely, you can see the bulge in its neck and sometimes you can even see something (fish tail, fins, or bird tongue) sticking out of its mouth. When I looked at these photos at home, it reminded me of an aerial ballet. The above photo is number 8 in the sequence. 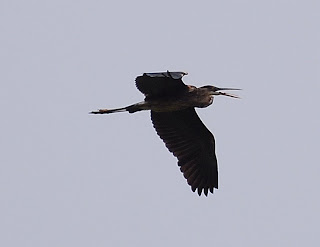 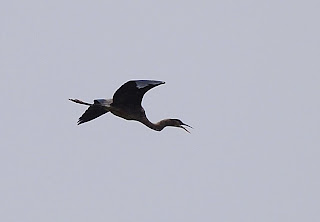 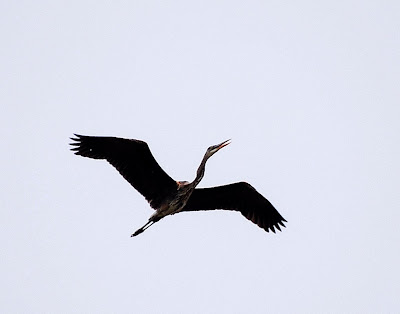 Look at those magnificent wings! 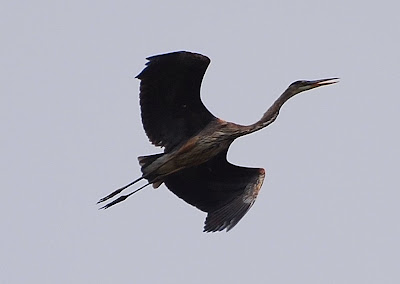 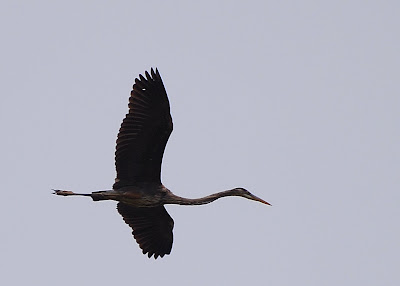 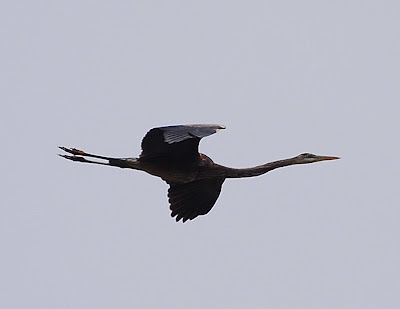 I've never seen a Great Blue Heron look like this before. 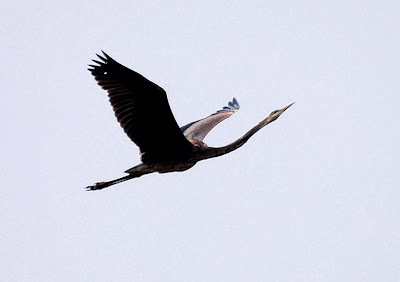 I thought this was an interesting an unusual posture. 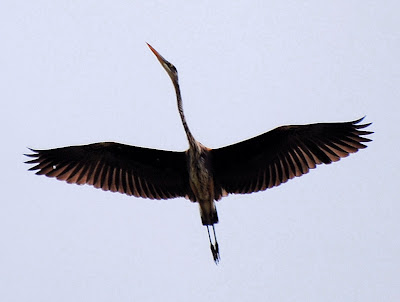 Full extension. Note the hole in its wing. 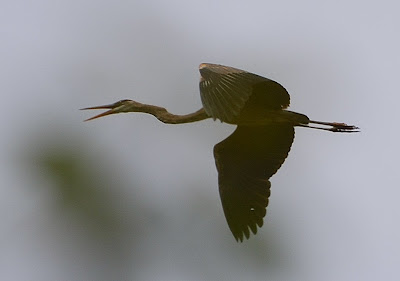 Last photo before the heron disappeared over the tree line.

Kathie, this is such a beautiful Sky Watch!

Wasn't that the most interesting thing? I was so fascinated watching it, I didn't even think to try for photos. Yours are great. I'm guessing the thing sticking out was the bird's tongue; the fish was pretty far down, I think.

katdoc, I believe you are right and I am so glad I was able to capture these. I have so many more photos of it but I couldn't publish them all!

Such a super series of photos Kathie, that must have been a wonderful and interesting sight.

Yes, I have a blue heron on my birds blog also. I like your flying herons a lot. I wish I had flying room here.

We have blue herons fishing the pond, but I have never seen that posture in flight. I read that herons can choke..rarely, but it does happen. I hope the heron was OK... Michelle

Awesome series of photos! What elegant poses. It must have been wonderful for you to see it in person.

That bird always looks so prehistoric to me. You got some really great shots, Kathie. Especially with the fish in it's throat. Great job!

Great set of photos. I have seen them trying to take down some very large fish. Hope it didn't stay stuck!

Great job, Kathie! You were definitely in your birding zone :o) I would not have even tried to get those photos. That bird is my nemisis... Thank you for those great images!

I can't tell you how you have made my day. I love this mysterious, majestic, marvelous bird. These photos are wonderful.

...amazing captures! I have never seen a GBH fly with his neck extended like that. Beautiful....

Those are amazing captures Kathie. I've never seen anything like that. The Heron looks so much bigger without the head tuck.

That Heron looks positively prehistoric at that height Kathie.

Great images! I got so uncomfortable looking at them, I'd guess the heron may have been a bit uncomfortable too! Especially since this is not a normal flying posture. Its not unusual to see shore bird with prey slowly making its way down the throat. But to see one flying in this predicament gets your attention!

These are the most extrordinary heron photos I've ever seen. "Ballet" was a good word choice!

Kathie, the first picture of the ballet dancing heron is a delight.
Such wonderful flight photos you captured!

Fantastic shots! Wow! I have never seen a heron fly like that before. I hope it managed to get that fish down! You must have been thrilled to get these.

Oh my! Poor guy, that must have been really uncomfortable. Stunning photos though.