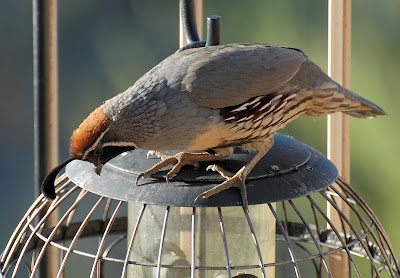 I know there's seed in there somewhere! 10-14-09
As autumn descends on Sycamore Canyon the bird population continues to change. While nighthawks, white-winged doves and martins have left, the sparrows, warblers and raptors are returning. Though a few turkey vultures still linger, I know that one day soon will be THE LAST DAY I see them until next spring. The Gambel's quail chicks from this summer have almost all matured and show up at my feeder now as adults, except for a few from a late hatching, which still do not have their adult plumage or top knot! 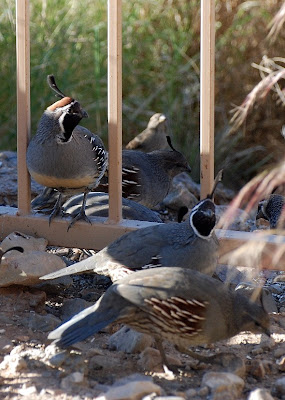 Waiting for the seeds to fall. 10-14-09
I love their happy chatter as they come to clean up seed from beneath the lone sunflower seed feeder. I have severely limited my bird feeding lately due to the presence of rock pigeons. So far it seems to be working, and though I often see these winged pigs on my neighbor’s rooftop, they seldom land in my yard any more. 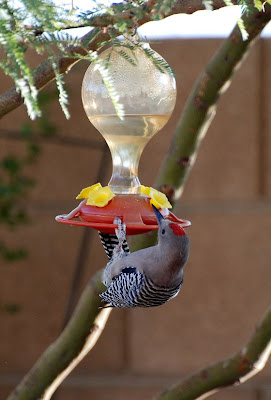 Gila Woodpecker clown 10-11-09
For awhile I was not seeing many woodpeckers, but they have come back in force again and the Gila woodpeckers crack me up with their laughter –like whinny and their clownish antics. I love to see them hang from the hummingbird feeder sipping nectar through their beaks like a straw. The flickers do not do this however; only the Gila woodpeckers.
On Sunday a juvenile cooper’s hawk hunted my bird feeder causing a dove to crash into the window. I heard the crash and when I came to investigate saw the marvelous raptor sitting on the fence. Later in the day I decided to water the garden and give it a good soaking with the hose. In the process I sprayed the orange tree with its oval basin-like leaves. As I turned away from shutting off the hose I looked up to see a hummingbird splashing with delight in one of the orange tree leaves! The huge leaves made a perfect tiny bird bath for this perfect tiny bird! 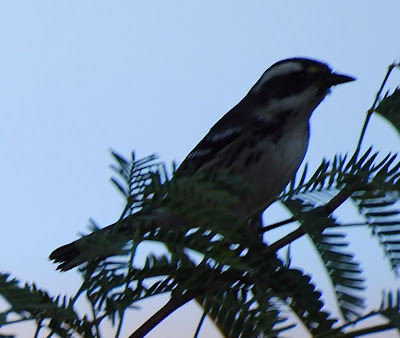 Black-throated gray warbler in my backyard 10-13-09
I had the surprise of the week last night when I was sitting out back talking on the phone to my youngest brother. As I he and I were in deep conversation a black-throated gray warbler flew into the yard and landed in the mesquite tree right in front of me! I could not help but gasp, and Chris, understanding my love for the birds, said he could wait if I needed to get a photograph. I did not think the bird would linger, but I casually got up and went inside to retrieve my bins and camera. Sure enough it was still out there and when I sat back down it came close enough for me to capture one quick photo before it flew away! With the Bewick’s wren I saw in the wash with TR last Tuesday and the warbling vireo I saw on September 25, this brings the Sycamore Canyon Bird List to a total of 83 species of birds! It blows my mind to think I live in a place where one can see 83 species of birds all within walking distance of my front door! 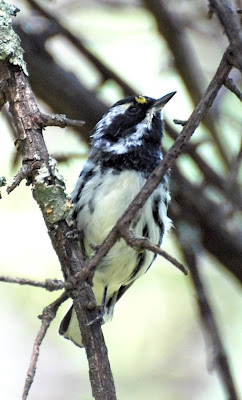 Black-throated gray warbler in Gardner Canyon 8-17-08
I took this photo of a black-throated gray warbler last year in Gardner Canyon which is just on the other side of the Santa Rita Mountains from where I live. I included it so you can get a better look at the beautiful coloring of this black and white warbler with its yellow lores. My camera has been acting up and will not focus when I want it to. I am trying to figure this out. Even though it has a fully charged battery, it will take one picture, then refuse to take anymore. It flashes F-- as if the battery is dead or missing. I have to shut it off and turn it back on again and then it will work for a few shots before it rebels on me. Any idea anyone? I have tried removing the lens and reattaching it as well as removing the battery and reinserting it. I have reformatted the card also. It goes through spells like this, then it stops. I don't know why but I hate it when it does. I could have gotten a much better photo of the warbler in my yard if it hadn't balked on me!
Posted by Kathie Brown at 5:30 PM

For the time being, our birds are simply AWOL here in Connecticut. I've read several pieces that have surmised it's because of the overabundance of natural food. I really don't care what the reason is, I just want my birds back!
At least I can live vicariously through your photos and words. Thanks!

Well at least you have some really nice colourful birds for the winter to observe Kathie.

TSAnnie, I bet the first snow will bring them out! Load up your feeders. My Mom said it was snowing there today!

Roy, I have wonderful birds to observe. I get hummingbirds in winter! What more can you ask for! and I never tire of the quail!

Well, I declare I do believe I saw a Black-throated gray warbler in West Virginnie. Did I? :o/

Black-throated gray would be such a wonderful life bird for us! I think the Cute Hubby and I are going to try a south east Arizona trip in the spring... ahh... spring... it is rainy and 40 in MD today.

Have a good weekend!

Beautiful little warbler! I always love the quail and the gila woodpeckers.

Bird couple, will you let me know when you come? I would be so pleased to meet you!

Mary, I love the woodpeckers and quail too!

Mary C, how nice to see your smiling face again!

Kathie, I love seeing your birds. Can hardly wait to see some of the same when I return to Yarnell in a few more days.

Congrats on the award, you so deserve recognition.

I sure do hope you come to the canyon next summer. I'd love to show you around. I might make it your way this winter. Have a place to park my truck with little camper on it's back?

I found you from Bobbie. When I saw Sycamore Canyon I thought of the one we hiked in west of Sedona. But his must be a different Sycamore Canyon. We are both casual bird watchers (no life lists). Eliot, my companion, used to have one in his youth. I first became more serious before I met him when I volunteered at the Bosque del Apache Wildlife Refuge. I love the woodpecker at the hummingbird feeder.