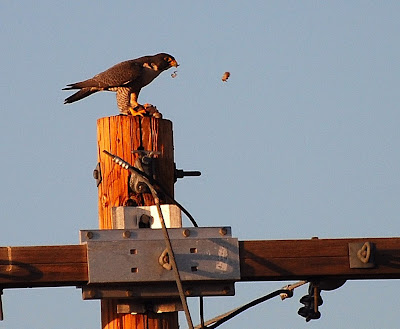 Peregrine Falcon in Sycamore Canyon 2-13-10
(Photo by Gusto! with Nikon D80 and 70-300mm lens set in sports mode.)
The GBBC is on and Gus and I have been out counting birds for the past three days. We spent Friday in Santa Cruz County counting birds in Rio Rico. Saturday and Sunday have been spent in Corona de Tucson and the Tucson area counting birds. As we were heading home from a full day of birding on Saturday that included Agua Caliente Park the sinking sun cast a golden glow over the desert. As we turned into the road to our neighborhood I spotted a raptor on top of one of our utility poles. Like everyone else in the Tucson area, we have plenty of Red-tailed hawks. Still, I checked this one out, just in case. As the bird came into focus I started exclaiming to Gus: "Pull over, Pull over! It's a peregrine falcon!" Gus pulled the car off the road and stepped out with the camera. I watched through my bins and started counting the rest of the birds in the area. Amazingly a red-tailed hawk was sitting in a palo verde tree just across the street from the falcon. However, it flew off as I got out of the car. The following series of photos were taken by Gus. They aren't quite as sharp as he would like but he was shooting up at an angle and we did keep our distance. We did not want to scare the bird away from its prey. I know how hard they work to capture a meal. We watched until the falcon was done feeding and flew off, then I counted birds for the rest of the mile segment. In that short distance and time we saw the peregrine falcon, a red-tailed hawk, and an American kestrel! All in Sycamore Canyon! Like Dorothy says in the Wizard of Oz, "There's no place like home! Enjoy the following photos which all click to enlarge and be sure to visit the rest of the world by clicking on the link for
My World Tuesday! 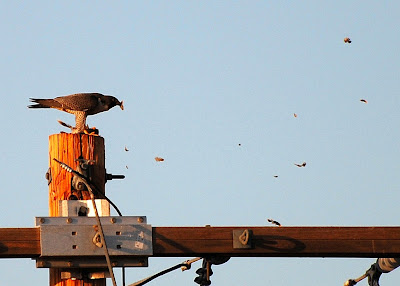 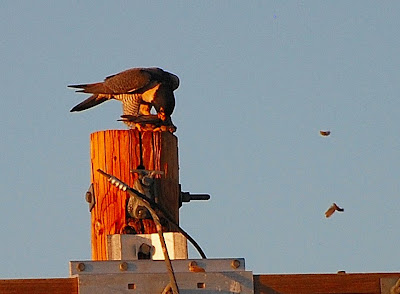 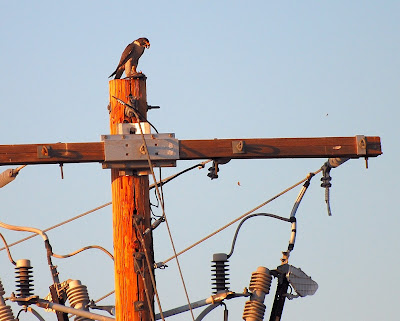 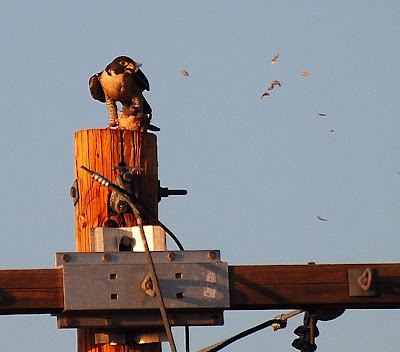 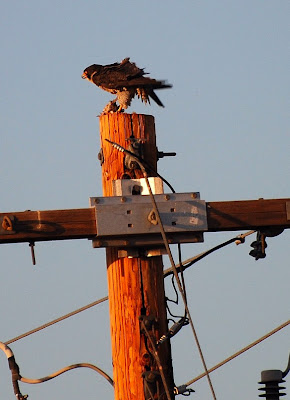 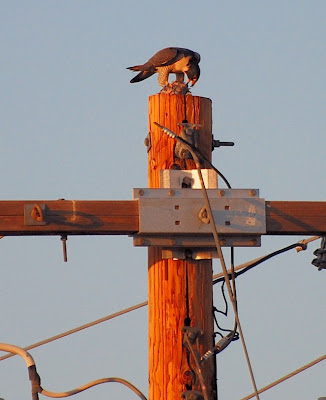 Today is the last day of the GBBC, so I am off to count birds. I haven't even had time to submit all my lists yet but the birds won't wait! I'll be back later with an update!
Posted by Kathie Brown at 7:55 AM

A beautiful falcon. You never know what you'll find in your own back yard.

Great find! I love it when I can identify a bird-of-prey's meal. My guess is that your falcon was dining on a mourning dove.

Kathie, you such a whoot!

Great job spotting and photographing the falcon. Love the shot with all the other birds in the background. Gives a true feel for eating in a hurry.

Great shots, Kathie! Love that golden glow and falcon does seem to be stuffing his chops! Marvelous! Look forward to seeing your next captures! Have a great week!

He looks dressed for winter still, with those bloomers.

Wow! Excellent! Great shots,,is it munching down on a dove?

The best birds are always the ones you don't expect to see!

What great shots these are and I love the title of your post! Amazing! This guy is sure enjoying his snack...

Fabulous shot of a falcon in golden light.

What a great capture, you can see all the feathers flying as he tears into his meal.

That is just fascinating. What a beautiful bird. The circle of life in action. Wonderful pictures!

an amazing creature! and the photos are superb, too!