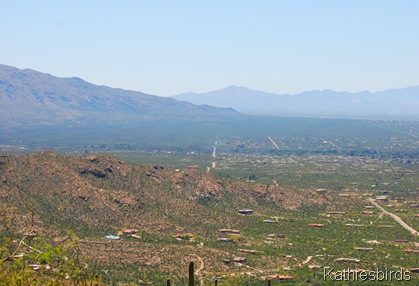 On April 12 my friend Kathryn and I took a drive up the Catalina Highway to Mt.. Lemmon. When Kathryn visited me two years ago we went birding in several places.  This time we went to all new places for her.  Mt. Lemmon is a totally different experience from Patagonia or Saguaro National Park. As we headed up the highway we stopped at several overlooks along the way. At one of our first stops I looked back over the Tucson Valley to see Houghton Rd running like a straight line through the desert.  Houghton Rd runs from the Catalinas at its north end to the Santa Ritas at its extreme south end.  It is the ribbon that connects these two mountain ranges that are part of the ring of mountains that surround Tucson like the rim of a bowl. 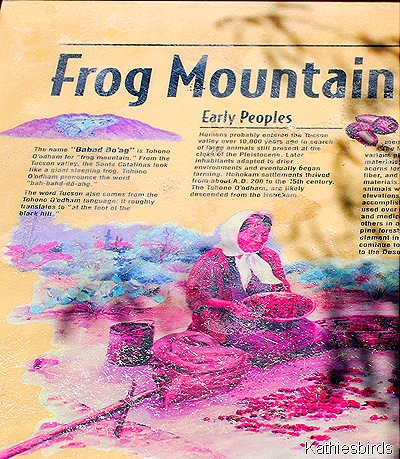 At the Babad Do’ag parking place I learned that Mt. Lemmon is known as the “Frog Mountain” to the native peoples. I think that name is much more colorful than Mt. Lemmon, and who knew that the name “Tucson” means “at the foot of the black hill.”  In researching this information I also learned that during WWII a Japanese internment camp was located at the base of Mt. Lemmon. Know by the ironic name of “Catalina Honor Camp” the detainees were forced to work on the construction of the highway. One of these “internees’ was a Japanese–American by the name of Gordon Hirabayashi. In 1942 Hirabayashi openly defied curfew and was sentenced to 90 days in jail.  With the backing of the ACLU he fought his conviction all the way to the supreme court. When he lost  he was sent to the Honor Camp. Years later his conviction was overturned and in 1999 the Catalina Honor Camp was renamed the Gordon Hirabayashi Recreation Area. I have driven by this place so many time and always wondered about the funny name.  Now it doesn’t seem so funny any more.  Now I want to go back there and visit this area named after such a courageous person. 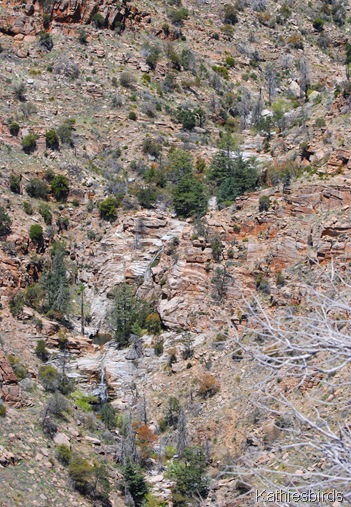 Farther up the roadway we stopped to see the cascades of Seven Falls. 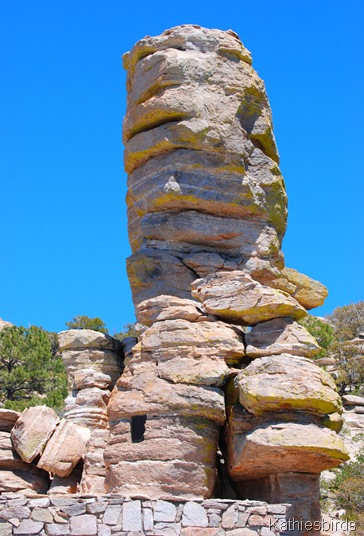 At windy point we marveled at the rock formations and gazed below at the ribbon of asphalt we had just driven up! Though we were always on the lookout for birds, the high winds kept many of them down.  At this location we did see a common raven and 2 white-throated swifts. The swifts were life birds for Kathryn. 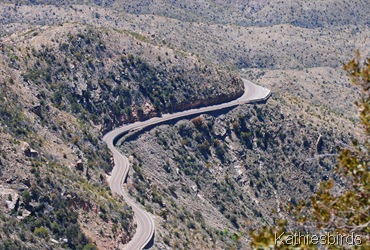 When you drive the Catalina highway it is as if you are driving from Mexico to Canada in 27 miles, for the road starts out in the Sonoran desert at 3000’ in elevation and ends at 9100’ ft. in forests of Aspen and fir. Because of this there are many and varied habitats with the accompanying bird populations. We started out seeing Turkey Vultures and Western Kingbirds and ended in Summerhaven for lunch where we saw Yellow-eyed juncos and Stellar’s jays! 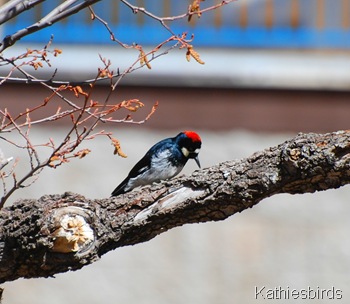 We also saw Acorn Woodpeckers and this is really the only bird photo I got.  The Stellar’s jays were high in the pines and deep in shadow where their cobalt blue and black plumage makes them virtually disappear in the foliage. Still, it was a great day and we had such a good time, which included a stop at the Palisade Visitor’s Center where Kathryn got her first look at a Magnificent Hummingbird!

Birds seen along the Catalina Highway:

A very interesting post, Kathie, Seven Falls must really be a sight to see.

What a cool place! That is one that I missed in my four years in AZ. Bummer.

bobbie, yes it is. The whole trip is one of the most scenic rides in AZ.

Idaho Birder, well, you will just have to come back for a visit!

Sounds like a wonderful birding day. That road looks amazing from up above. Love the shot of the Acorn Woodie.

elleninmind, it was a wonderful day all around. Thanks for stopping by!

What a great place.

Stellar's Jays are impossible to photograph! In two years I've taken one good photo. They're so crafty.

Such great views from "Frog Mt" and a magnificent falls too. Your drive from desert to fir is what we see at the canyon from bottom to northern rim. Sure makes for amazing diversity. I really like the rocks, almost looks like the crooked man's house.

The Seven Falls is an amazing sight and photograph Kathie.