The Last Week of November 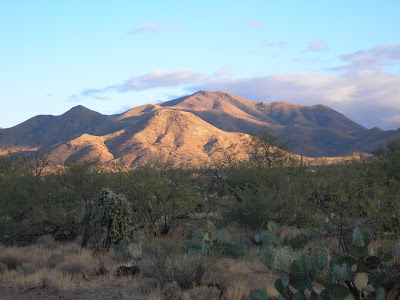 Evening falls on Sycamore Canyon with a golden glow. In the gray dusk a shadowy bird flies past like a thought, undefined and fleeting. Silence descends upon the desert in fits and starts, until, by midnight, I question if the earth is still breathing. Then a yapping starts, followed by louder barks and howls, voices lifted in a frenzy, then tapering off to silence once again. Who knows what other creatures stalk the night?
November 28th
With dawn the daytime desert comes alive. Now the sunlight brings the birds. Finally a male hummingbird, the first I’ve seen here at my house, alights at the feeder, its purple gorget flashing the reflected sun. This violet hood stream backwards on the bird’s throat as if blown back by wind as he streaks through the air. The males are shier than the females. They dart off at the slightest movement I make inside the house. The females will sit and let me watch them, unafraid. I can sometimes see the yellow pollen on their beaks and their tiny tongues flicking in and out as they sip the nectar from the feeder.
I hear the rolling trill of a rock wren. Looking up I see it right outside the window on the block wall. It bounces up and down as if doing deep knee bends. I wonder if there is a bird drill sergeant in its mind commanding the rhythmic motion. 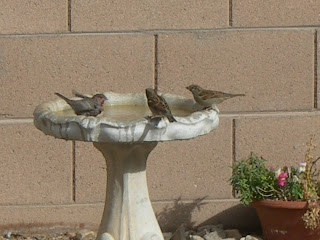 When I first moved here and put out my birdbath the birds didn’t seem to know what to do with it. Now they visit regularly. Today up to four house sparrows at a time are splashing merrily in the water. There is something so joyously happy about a bathing bird. They seem to go at it with reckless abandon as they dip their bodies into the water and splash small ripples across their backs. Then the flight into a nearby tree or onto the block wall to sun themselves.
Suddenly there is the rush of wings as birds scatter in all directions. I watch amazed as a cooper’s hawk flies in, soaring through the wash, then banking. It flies strait towards me as I watch from inside the house. At the last minute it pulls up and flies over the rooftop. The next thing I see is it landing on the bock wall behind my mesquite tree. It tarries but for a moment, then flies off in pursuit of prey elsewhere. The yard is empty and silent briefly, but before long the birds return to feeding, bathing and sunning themselves.
November 29
The sweet scent of the damp desert awakens me. I brew a cup of tea, gather up my notebook and some yogurt, and head out onto the patio to welcome the dawn. Wrapped in a blanket with pen in hand I write in my journal as the morning birds descend upon my feeders. I listen to the other sounds of the waking world: trucks backing up with their warning signals beeping, garage doors humming as they open and close. Nearby I hear the echo of worker’s hammers ringing off the mountains, and always the peeping, cheeping, twittering sounds of birds. Sometimes the mourning doves will fight for position beneath the feeders. They raise their wings and snap them at their rivals. It sounds like a locker room during a towel fight.
As the sun rises behind leaden skies a soft gray light washes over the canyon. Soon a gentle rain starts to fall, soaking the earth around me. The sound of water in the desert is a wonder, a melody from a dream, perhaps. A remembered, comforting sound of life. The collected water from my rooftop pours from the rainspouts into the back yard splashing off the hard soil before soaking in. All day long the rain comes and goes teasing us with its life-giving properties. Autumn rain is gentle and promising.
As I walk through the neighborhood I see more and more Christmas decorations appearing in the front yards of my neighbors. Without evergreen trees to decorate I see live oaks and willows adorned with garland, lights, and ornaments. As in every other state I’ve lived in the rooflines are strung with lights. Today I saw my first Christmas tree peeking through a front window. This will be my first Christmas where it doesn’t snow.
November 30, 2007 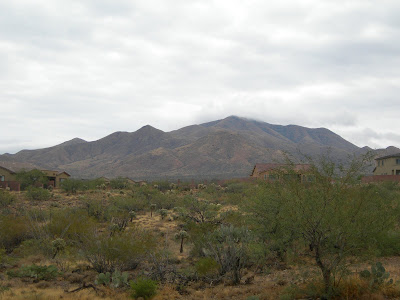 Today the air is pregnant with a storm. All the world is waiting. It is as if the desert is holding its breath. I have so much to do, but the desert is calling me. A comfortable coolness envelops me as I step out the door. On this last day of November I marvel at the land around me. The gray light from overcast skies lends a softness to the desert. It is a thorny quilt spread out before me. Beyond the cacti and ever rising houses Mt. Fagan watches over us, his slopes now burnished copper, gray and sage. A low cloud rests on his shoulders, then drifts away.
The bare ocotillo branches scrape the November sky. Finches grasp the thorny branches and then a Gila woodpecker. I wonder how they can avoid the thorns? The 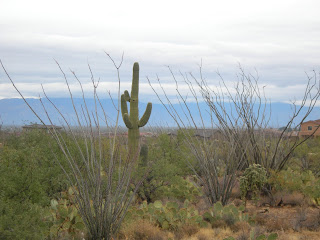 smaller birds I can understand, but how does the larger woodpecker manage it? The woodpecker is a gray silhouette on a gray branch against a gray sky. It looks like a large bump on the branch, part of its structure, but then it moves, climbing the branch like a ladder.
At home once again I am looking out the window at a gilded flicker on the suet. Explosively the birds take flight. The Cooper’s Hawk is back! Though she swoops and soars she is unsuccessful. She lands on the block wall across the wash. I grab my binoculars and focus on her. I can only guess that she is a female because of her size. In birds of prey the females are usually larger than the males. She is rather large with a dark cap and dark gray back. Her breast has the rusty barring of an adult. A juvenile would sport vertical striping instead. She scans the wash and drops below the sight line of my own block wall. I rush out to see if she is in the wash, if she has gotten prey, but she is gone. I never saw her fly up above the wall. I can only assume that she flew low up the wash before rising to the sky once again.
Posted by Kathie Brown at 11:44 AM