Thanksgiving Evening and Beyond 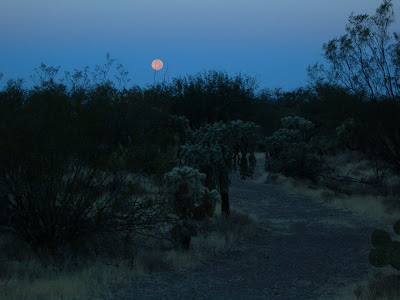 Well, after the threat of stormy weather, Thanksgiving Day warmed up enough that I was back in a sleeveless shirt and sandals by noontime. It stayed sunny and warm for the rest of the day. I saw my first kestrel in the canyon as it flew in and alighted on the block wall across the wash. About the size of a mourning dove, its cinnamon colored back was to me, but it flew off when I tried to take a picture. I am seeing many more raptors lately, while the vultures have all but disappeared. They were a daily sight during the spring, summer and early autumn.

We shared Thanksgiving dinner with my son and his wife. We had our fill of turkey with all the trimmings, and my kid’s favorite—homemade crescent rolls. Around 10 o’clock at night Gus and I decided to go for a moonlit walk. An almost full moon cast silver light across the desert. Though cooler, it was still warm enough to go without a jacket. In fact, Gus still had on shorts, while I changed into a long-sleeved shirt. He’s from Maine and he insists he will wear shorts every weekend all winter long! A post holiday silence spread out like a blanket, wrapping the homes in comfort. We saw one house dressed in red and green Christmas lights. Another was fully decked out with lighted holiday figures. Across the desert to the north the lights of Tucson twinkled like a string of amber-colored diamonds. Every now and then a light breezed caressed our faces. It was after eleven by the time we returned home.


The next morning dawned sunny but slightly cooler than the day before. Gus 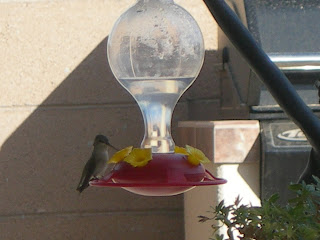 fixed breakfast while I busied myself with filling bird feeders and the birdbath. We ate out on the patio with birds for company. Flickers, woodpeckers, finches and mourning doves flocked to the feeders, chattered on the block wall, and drank from the birdbath. Only four feet from Gus my iron ballerina sculpture held up a nectar feeder where hummingbirds boldly buzzed in for a sip. I smiled in delight at them all. I never grow tired of their antics. A Gila woodpecker fought with a mourning dove over position at the birdola seed cake. Finches are constantly bickering and fighting over seed, as dramatized by an incident earlier this week.

I have a bird feeder that is a tube type surrounded by a wire cage to prevent larger birds and squirrels from scarffing all the seed. It is right outside my den window and as I was talking on the phone and watching I saw 2 house finches get into a fight within the cage part. I thought they would tussle and get over it but one bird pinned the other to the bottom and just kept pummeling it with its beak! The under-bird was trapped with its head sticking out of the cage wires. On top the mean bird hammered, ripped and tore at the other finch’s head and breast. It couldn't seem to free itself to escape. I watched for about 30 seconds to a minute but I couldn't take it anymore. I rushed out the door with the phone still in my hand. As soon as I came around the corner the other birds fled, including the bully on top. The under-bird looked like it was still stuck in the feeder, its head dangling through the wires. I was sure it was dead, but then righted itself, found an opening, and flew off. I swear if I hadn't been there the mean bird would have killed it! Who knew that these benign looking finches could be so vicious! It was a fight to rival anything seen in Ultimate Fighting on TV.
However, most of the time it is quite peaceful here. When the mourning doves snuggle into the soil and sun themselves it is one of the most peaceful scenes to observe. They often gather beneath the mesquite tree for a snooze. Sometime they spread one wing out to catch the warmth of the sun, then they pull that one in, roll onto the other side of their breast, and extend the other. It makes me happy to know they feel that safe in my yard.
Yesterday grew colder as the day wore on. We closed all the windows in the house to keep the heat in. Last night the news was buzzing with Winter Storm Warnings. Having lived in Maine it was almost a joke to hear them talk of the temperature dropping into the 30’s with snow above 6,000 feet. We only had a brief shower last night and today woke to cloudy skies without a flake in sight. By noon it should be back into the 60’s. While I haven’t turned the heat on yet, today is the day I really wish I had a fireplace. I could at least pretend it is winter.
Posted by Kathie Brown at 8:45 AM