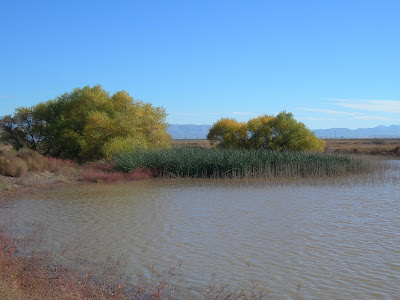 On Sunday, November 11th I awoke at 4:30 a.m. to prepare to meet another group of birders from Tucson Audubon, only this time, my husband was going with me. I kept expecting him to come up with some excuse to back out. I still couldn’t believe he agreed to go with me, especially on a Sunday when his Giants football team was playing, but he insisted he was going and he never changed his mind.

I was told to never be late to a meeting place as the others would not wait for you, so Gus and I rushed around the house feeding pets and trying to eat breakfast ourselves. The meeting time was 6 a.m. We had put most of our belongings in the vehicle the night before. Now we packed our cooler with drinks and sandwiches. As Gus reached in to grab one last can of Pepsi his hand brushed a glass bowl which smashed all over the tile floor spreading broken glass and green goo everywhere! Somehow we were able to clean it all up, stop and fill the car with gas, and still make it to the parking lot north of I-10 on Houghton Road in time.

We met the other birders and headed out with 10 people in 4 cars. We headed east on I-10 and stopped in Benson to pick up one other birder. After a brief restroom and snack break we continued through Benson to highway 80 where we turned south towards Tombstone. It is an odd thing to me to travel through these historic western towns. They are stuff of TV westerns, not reality. However, I grew up in the east where George Washington was suppose to have eaten at just about every wayside Inn in the state. I grew up surrounded by history also, but it was the history of pilgrims, Puritans and Patriots. The Revolutionary war just didn’t grab my imagination like the west does.

Tombstone is pretty quiet early on a Sunday morning. It’s not very big and we passed through quietly. We continued our southerly trail until we turned east once again. Eventually we reached a place called Whitewater Draw. I had never head of this place, but hey, I’m new here. It had taken us over 2 hours to get here. As we turned into the gravel road leading to Whitewater Draw the group leader, John Yerger pulled over and we all got out. Overhead a prairie falcon soared, though it took a moment to confirm its identity. Then they set up scopes to view the various sparrows hiding in the field grasses. We saw Brewer’s sparrows, white-crowned sparrows, Savannah sparrows and lark buntings. It was my first time seeing lark buntings and to me they just looked like house finches with smaller beaks, but John and his friend Jake pointed out the eye rings and the white wing patches that became visible when the birds took flight.

On a nearby snag someone spotted a larger bird roosting. A look through the scope revealed a scaled quail just sitting there warming itself in the early morning sunlight. This bird is a rare find and we were all pleased to see it, another life bird for me. We added a meadowlark, a red-tailed hawk, a vesper sparrow and a loggerhead shrike to our list before we continued into the Draw.
This time there was a restroom right in the parking lot. We barely got out of our vehicles before we saw a black phoebe. Then, right under the picnic pavilion we found two Great-horned Owls roosting. But, most amazing of all, on a gravel heap before us was a Crested Caracara, or Mexican Eagle. It just stood there on the mound undisturbed by our presence as i 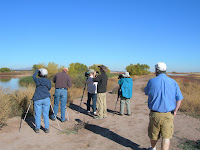 f to say, "Hey, look at me! I’m posing just for you." Crested Caracaras are rare in the U.S. This was a marvelous addition to my life list. The bird appeared to be a young one as his colors were more subtle and not quite the dark contrasting black and white of an adult. The eagle’s shaggy leg feathers looked like bloomers on its long legs, which met at an almost 45 degree angle to the horizontal body. From the front of this plane the neck rose almost vertically to the crested head and a huge beak. The hooked gray beak had a blush of pink near its base. A look in my Sibley’s bird guide told me that the beak can change color in an instant! However, it failed to tell me what causes the change—fear, excitement, temperature, who knows. Gus found this bird most interesting and we watched for quite awhile. He said he could have watched it for hours. Even when we moved off to look for birds on the ponds the Crested Caracara never left though the trail passed quite near him. 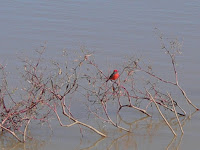 Whitewater Draw is apparently a wetland with 3 or 4 ponds. Surrounding the ponds are fields and farmland with mountains in the distance. Overhead we heard the "garooing" of Sandhill Cranes as they crisscrossed the ponds flying above us in small groups. We saw more ducks and grebes and blackbirds in and around the ponds. In some nearby willows a ladder-backed woodpecker drummed on a branch. With all the autumn gold and chartreuse of the foliage and the steel blue of the water a beacon of color caught my eyes. The blood-red feathers of a vermilion flycatcher flew up over one of the ponds. It caught an insect and then alighted on its perch once again. It is as if nature concentrated all the red it could in this one tiny bird. 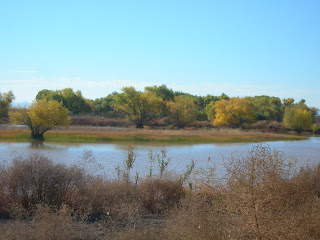 We headed to a willow grove strung out like a tail at one end of the ponds. Long-eared owls had been spotted here in previous years, but this time we were unable to find them. However, someone did find two barn owls roosting for the day in the thick of the trees. Their gray and tawny bodies looked exactly like a broken tree branch until you saw their white heart shaped face peering back at you. We stood on a sandy bank with our scopes and viewed these sleek owls from a distance.

Our lunch was consumed on the fly, so to speak, as we continued on our trip. We were headed north now towards Wilcox, but not before stopping a couple of times along the way. Our first stop was on a dirt road along the central highway near some farmland just south of Elfida. Here we looked for more sparrows in the grasses and were rewarded with a Cassin’s sparrow among others. Gus took a nap in the car while us crazy birders tramped through the fields getting our socks full of stickers and grass seed. We flushed a covey of scaled quail a couple of times. Overhead we trained our binoculars on what looked like a swarm of black flies but was really huge flocks of Sandhill Cranes riding the thermals in the warming sun. The sounds of their garooing filled our ears as their images filled the eyepieces of our binoculars. What a spectacular sight! Just as we headed back to our cars to continue our journey a young golden eagle came soaring across the fields out of the mountains beyond. Its wide wings showed the typical white wing patches of a young golden, along with the white base at its tail. Young Bald Eagles do not have a white tail and in fact take up to 4 to 5 years to develop their typical adult plumage.

We made a couple more stops in a place called Kansas settlement where we were able to see a ferruginous hawk and a roadrunner. We ended our trip at Twin Lakes Golf Course in Wilcox where we saw shore birds and ducks once again. This daylong trip yielded me a list of 63 species of birds, the most I had ever seen in one outing. When we returned home Gus was able to watch his Giants football game with our son, which he had recorded on the DVR.
Posted by Kathie Brown at 7:19 AM

I looooove that first photo Kathie (and the others too)!!! Sounds like you had a great trip. Isn't it wonderful when your husband takes part in your favorite activities? Great blog posts :)!