Art in the Yard 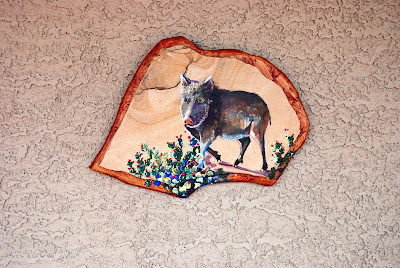 Saturday Morning was hot, but we still had errands to do. On our way into town I asked Gus to stop by the Rincon Valley Farmer's Market as we have not been in quite awhile. The Farmer's market was abuzz with activity. People were milling about and negotiating prices left and right. There was produce for sale and information from the Forest service about eradicating buffle grass as well as preventing wildland fires. While I was conversing with the agents from the Forest service Gus wandered off by himself. When I found his later he was stopped at an artist's booth looking at art work to hang on the walls under the covered patio. The artist is Garnet Myers. Gus liked his work so we bought a couple of pieces and brought them home to hang in the backyard under the covered patio. Have a look! 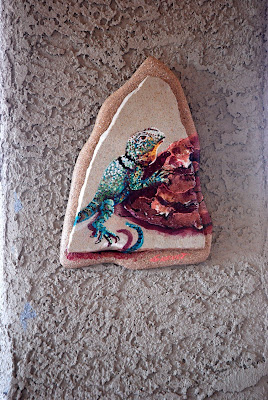 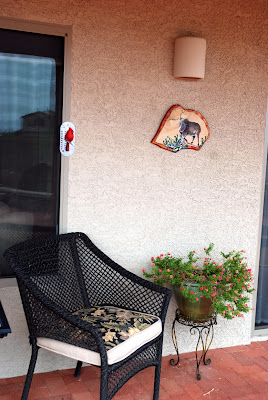 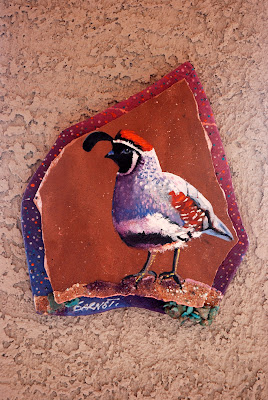 What nice pieces. They look beautiful on your patio wall.

I like the new header photo which I have only just noticed.

Let me say first (now that I've viewed them all) they are beautiful. Hubby did well. However, when the first one appeared on my screen, I thought perhaps you had painted a memorial plaque to the poor fellow who died in the last post. Just kidding. Pappy

Nicely done by your hubby - pat him on the back, will you?
Cheers, Klaus

Those are beautiful pieces. They look great on your patio wall.

Great patio artwork! The Gambel's quail is my favorite.

Neat post as always. I also noticed that you were in the top 100 on Nature Blog Network. Looking good. Thanks for your support and comments!

These are all beautiful but the last one, the Gambel's Quail is my favourite!

All are nice, but like Ann, my favorite is the quail. Good find!

Thanks everyone for all your kind comments. Gus liked the javalina, we both liked the quail, but I picked out the collared lizard. I liked the colors and it reminds me of my son, Alex, who loves snakes and lizards and use to have one of these when he was young.

The nice thing is, we can see the lizard and quail from inside the house as well as when we are outside on the patio so we get double the pleasure from them!.

Kathie - beautiful! I love southwestern art of any kind, and it always looks so beautiful on stucco walls. I love your patio sconces, too. I believe I will "set a spell." ;o) Thanks for sharing.