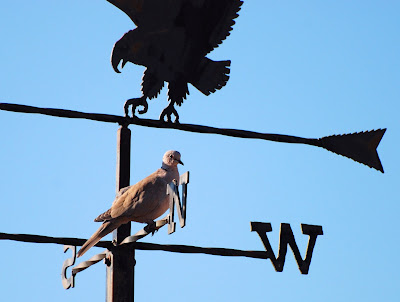 Eurasian Collared-Dove in Coolidge, AZ by kathiesbirds 11-1-08
Click to enlarge for the best view
What's the best thing to do the morning after Halloween? Go for a bird walk of course! I set out early on November 1, 2008 to see what I could see after spending the night in Coolidge to witness my grandson, Xavier's first Halloween. G had told me he had seen a "little owl" in the barren field behind the school. I decided I would try to find the owl. I was unsuccessful that morning but I did find this Eurasian Collared-Dove perched atop a weather vane. Did it, perhaps know that the winds of change were in the air?
Eurasian Collared-Doves are an old world species that became established in Florida in the 1980's according to Kaufman's Field Guide to Birds of North America. They have expanded their range north and west since then. Not to be confused with Mourning Doves, this bird lacks the dark spots on the wings but it sports a dark, thin crescent on the back of the neck. Unlike the pointed tail of the Mourning Dove, this bird's tail is square with more extensive white and its wings do not make that characteristic whistling sound when it takes of. The voice is different also. It is found most often in suburbs and cities and is less likely to be found in wild areas. I saw my first one in Fort Myers, Florida on January 18, 2003.
To see more amazing sky photos click on the button below.

That dove has a great sense of humour. LOL

What a great shot--and a very brave dove (or at least a bird that can't distinguish two-dimensional images).

Gah! When I first looked I thought the predator was real! Good sense of humor and a wonderful photo :)

Good position.
That seel bird looking east and your dove looking north.
We only have Spotted Dove (Streptopelia chinensis)here.

Good position.
That seel bird looking east and your dove looking north.
We only have Spotted Dove (Streptopelia chinensis)here.

Interesting bird which I have not knowingly seen, and definitely have never even heard of. Nice SWF post!

What an interesting shot....the dove looks in grave danger :-)

Lovely dichotomy! The dove below the "bird or prey".

That encounter is so real and happens all the time. LOL Well, not so funny for the bottom bird.

Beautiful - especially on the vane and the sky backdrop!
Cheers, Klaus

Marvellous capture. Weather vane and bird such a moment.

Haven't seen either of those birds around here!! What a great humorous shot.

How perfect catching the dove on that weather vane:)

Wonderful image, Kathie! I love the shot of the peaceful, innocent dove -- seemingly oblivious to the apparent danger of the "eagle" above. And all set against such a crisp blue morning sky. Beautiful!

Hi Kathie
We have and abundance of Collared Doves over her, very common.

Well caught Kathie, a great photo and I enjoyed learning something of the Collared Dove. Thank you.

This is great, Kathie. Do you think birds have those "I always hate photos of me" moments like we humans do?

I have heard that this dove is on the move..thank you for more info on it...

How did you get that shot? No way! That is just great.

I agree. Great sense of humor.

Terrific photo. Perfect focus. I notice from the exif data on your photo that the program mode choose 1/1000 sec and f/5.6 at 300mm. It made a good choice to give adequate depth of field and a sharp steady focus. If you didn't use a tripod, you have a good steady hand.