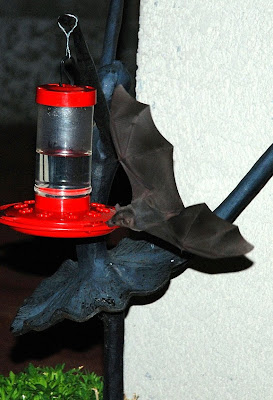 Lesser long-nosed bat 9-109
The bats arrived on August 27 and since then I have been going batty trying to keep up with their need for nectar. Every night they drain my feeders and every morning I get up early in time to refill them so the hummingbirds will have something to eat! The bats typically arrive around 8 PM and stay until 3:30 or 4 AM. I currently have 4 feeders up in various locations around the yard. While they don't ever use the fixed feeder on the window over the sink, they drain all 3 other feeders every night. Since the Lesser Long-nosed Bat is an endangered species I have decided to join the Bat Monitoring Network this year. As a result I am now collecting data on the arrivals and departure of this migratory species in hopes of protecting them and their environment. I first saw the bats last year when my hummingbird feeders were being mysteriously drained during the night. You can read about that post here. 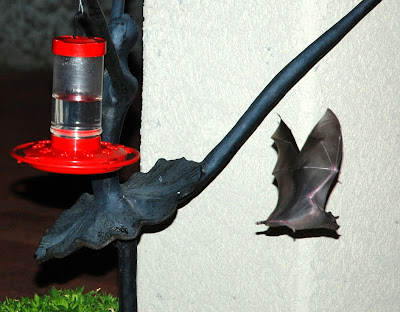 Lesser-long-nosed bat at the favorite feeder 9-1-09
You cannot imagine how it is to have these swooping clouds of membraned mammals flying past your window. At night I shut the lights off inside the house and gaze out through the sliding glass window as bat after bat swoops in for a sip from the feeder. They barely touch it and they are gone, but another is quickly in its place. This particular feeder has 10 drinking ports, so sometimes I see 2 bats at a time drinking. As their brown bodies flutter by I feel as if my heart is taking wing with them. I have always been afraid of bats, but these creatures have me fascinated. I could watch them for hours on end.
As for my recent absence from the blogosphere, I have been very busy attending meetings about the proposed Limestone mines that would severely impact the pristine and fragile habitat of Davidson Canyon. The Army Corps of Engineers has extended their comment period for Cal Portland cement's 404 permit to build a haul road across Davidson Canyon from September 5 to September 11th. If you do not want to see this precious habitat destroyed you can submit your e-mailed comments to

Marjorie.E.Blaine@usace.army.mil
or snail mailed to:
U.S. Army Corps of Engineers
ATTENTION: Regulatory Branch (SPL-2004-01399-MB)
5205 E. Comanche Street
Tucson, Arizona 85707
You do not have to live in Arizona or Pima county to do this. This is a Federal issue and any one in the United States can comment. Davidson Canyon flows north to Cienega Creek an area that has been designated as an Arizona Outstanding Waterway. As a perenial stream, it provides habitat to all kinds of birds and wildlife and is a favorite among serious and amateur bird watchers. One thing I learned at the recent Town Hall meeting is that the Davidson Canyon Corridor and Cienega Creek provide the only possible wildlife corridor from Mexico to the Mogollon Rim. If this haul road is built it will cut off this passage since it will bisect the canyon with huge 23 ton trucks hauling limestone from east to west and back. The limestone will have to be removed by blasting. Can you imagine what impact that will have on the birds and other creatures?

I have personally birded in this area twice now and it is so pristine and peaceful. Yet, CalPortland has already destroyed some of this habitat by starting to build the haul road before they even have the permit! You can see the KOLD News coverage of this story here.

This mine could possibly affect the migration of the lesser-long-nosed bat, but we won't know for sure unless the impact on this and all other species are studied. Please ask the Army Corps of Engineers to request a full Environmental Impact Statement instead of the abbreviated Environmental Assessment.

In your comments you can ask them to study the impact of any and every species you list. this is more effective that generalizing by just saying "birds" or "snakes". I want any and all of you to be able to come and visit Southeast Arizona and be able to see lesser long-nosed bats, varied buntings, green kingfishers, and barn owls in Davidson Canyon and Cienega Creek now and in the future. It is a birder's and naturalist's paradise here and a well kept secret until now.
Here are some helpful links:

On a personal Note: If you have asked me to be your friend on FACEBOOK I am not ignoring you, I have just been too busy to go to the site and confirm you as a friend. Perhaps I will get to that task this week. My problem is, I would rather be outside watching birds! There is always so much going on and I never even have time to tell all the stories I want to!
Blossom Update: All is well since her last check-up. We go back for another one next week. Still no curl in her tail.
Sycamore Canyon Update: I have seen 2 new species seen here in Sycamore Canyon.

You have been busy, lady. I'm enthralled with your bats! Thanks for a post full of good information. Take care,

Oh, Kathie, how wonderful that you have these bats, and how awful that a canyon and stream are threatened. I still remember how beautiful it is around Tucson.

Kathie, what a beautiful soul you are. I am frightened of bats and you my lovely friend feed them. Perhaps it's because I have never actually seen one and only heard about them in horror stories. I have to rethink my feelings about them now since reading your wonderful words.
Good Luck with saving that beautiful pristine canyon and I am so happy Blossom is doing so well.
Have a gread Labor Day Weekend, stay safe and may you see many glorious birds....:-) Hugs

How wonderful to have these little creatures visiting your feeders, so much more entertaining than TV. You have captured them so well in the darkness and in flight as well...that takes quite some doing!
I love the crossbars and bracing in their wings, so like the early aeroplanes.

Kathie, it's so cool that you see the bats at the hummer feeders. Bats are an important part of this earth too and very important polinators.

I've marked the sites you passed along and will definately write to the Army Corp once I've done some reading. It would be, and sounds like it already is, a crime to allow Cal Portland to create this road. I'm glad you are there fighting this. Thanks.

Hurray! Your bats are back, I was only thinking about them the other day. I am so happy that you have started bat monitoring, I am sure you will get lots of good records - bats are so cool.
It sounds as though you have got a real battle on your hands with Davidson Canyon. Unfortunately it seems as though large corporations like that don't have to follow the same rules as the rest of us.

Mary, so nice to see you again!

Denapple, if you ever come back I hope you get a permit and go down into cienega creek. It is amazing.

Bernie, you are so sweet and kind. Thank you for all those comforting and friendly words and well wishes. I hope you have an awesome weekend also. I woke up to thunderstorms this morning so I am seeing lots of birds right in my own backyard!

gunilla, thank you for your visit!

Arija, they are amazing creatures and this species makes it easier for me to like them because they are nectar feeding bats. I must confess I would not be so interested in the vampire variety!

Celeste, I just saw a report on the news from Friday night where CalPortland has not only started the haul road, they haven't even put it in the area they marked out and submitted as their plan. It is much closer to the riparian area and the county came out and surveyed the damage. It could lead to a court case but with the budget being what it is, Pima County may not have the funds to fight it!

Wow, bats at a hummingbird feeder. Nature NEVER ceases to amaze me. A fantastically informative post.

What wonderful photos! Glad you're feeding the bats. I'm worried as just last year we could watch the bats swoop over our pond and this year I have yet to see one. Keep up the nectar refills!

These are some great bat shots. I see real small ones flitting around here at twilight, but these have some real detail. I love the one with the underside of the wing, showing the bat's "armature"!

That is so cool! Great photos..

I want to also say I am glad you pup is healing..hope the curl comes back..
and I am so impressed that you are out saving land from being destroyed!
The PBS series on the national parks..make people like you all that more important!