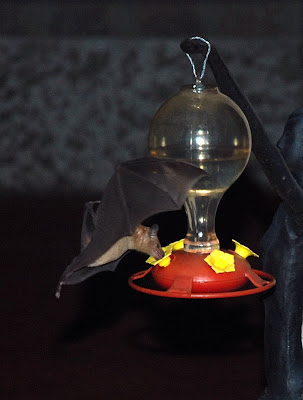 Lesser Long-nosed Bat photo by Gus, 9-18-08, Nikon D80 18-70mm lens: Auto mode
Click to enlarge for a better view
I’m delighted by the return of the hummingbirds. I’ve been mesmerized for weeks with all the species migrating through my back yard. It’s so much fun that I went out and bought another hummingbird feeder and hung it beneath the mesquite tree, bringing the total to 3 nectar feeders in my yard. One is suspended from a suction cup hook on the window over my kitchen sink. The other two are located in the backyard with one hanging from the arm of my wrought iron ballerina sculpture and the other in the aforementioned tree. I am getting so many hummingbirds that my nectar feeders are draining rapidly and I find myself making new batches of nectar almost every other day. However, last week I started to notice something strange.
I would fill the feeders at night after the hummers had flown to their nighttime roosts, but in the morning two of the three feeders would be empty. At first I thought it might be due to the thunderstorms we were getting which are usually accompanied by high winds. I thought perhaps the wind made the feeders sway and caused the nectar to leak out. But, it was still happening when the nights were calm. So, I took the feeders in for the night and set them out first thing in the morning. This saved my nectar but didn’t solve the mystery. 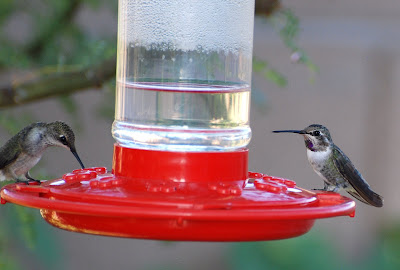 Hummingbirds at new feeder photo by kathie 9-18-08 70-300mm lens: sports mode
This afternoon I sit out on the patio once again enjoying the hummingbird wars. The warm rays of the setting sun bathe me in soul nourishing light as I watch the emerald jewels flying about. Just as the sun is setting Gus arrives home. Soon he is grilling us some hamburgers to eat. We sit down for a relaxing evening together and I forget all about my nectar feeders. I suddenly remember them around 9:30 p.m. and decide to bring them in. However, before I step out the door I decide to turn on the patio lights. I peek around the edge of the drapery panel to see if I can catch whatever has been drinking from my feeders in the act. What I see causes me to jump and cry out. Gus comes over to see what I am so excited about. There, flying about my back yard, darting right before my face and under the covered patio are bats! Large bats. Lots of bats. And, they are landing on the nectar feeders and lapping up nectar as fast as their little tongues can go!
Gus grabs the camera and opens the door just enough to poke the end of the lens out the slit. I grab the cats and shut them in the bedroom so they won’t escape through the open door. Then, we both watch amazed as bat after bat swoops in for a brief sip of nectar, then darts rapidly away again. At times there are three to four bats at once. I leave Gus at the window and turn on the computer to research what species we are seeing. Once we upload the pictures I can compare them to the images and behavior I find. It doesn’t take me long to discover that we are watching Lesser Long-nosed Bats. According to the Sonoran Desert Museum, these are an endangered species here in AZ. They are nectar feeders and pollinators with their primary food sources being saguaros and other upright cacti as well as agave blooms. The saguaros blossom in the spring as the bats are migrating back to the Sonoran Desert from Mexico, and the agaves blossom in the fall providing food for their southward migration. 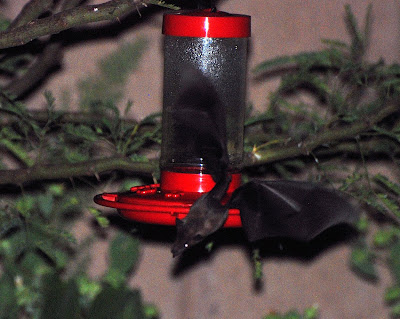 Lesser Long-nosed bat at new feeder; photo by Gus; Nikon D80 70-300mm lens
I also discover that the Town of Marana has a Lesser Long-nosed Bat Monitoring Program where citizen scientists actually measure the levels of nectar in their hummingbird feeders before it gets dark and then again in the morning. Well, mine start out at least half full and are fully drained by dawn. While the bats seem to like the feeders in the back yard, they seem to leave the one on the kitchen window alone. I can only guess this is due to the fact that it’s not quite as easy to swoop up to and fly away from safely.
I thought at first that I would don a hat and jacket and rush out to grab my nectar feeders and bring them in for the night, but since discovering that this species of bat is endangered and migratory (so they won’t be hanging around forever) I decide to leave the feeders up for the night. I hope they enjoy the feast and have a safe journey southward. As for me, I am shaking my head in disbelief. I never thought I would be helping to feed bats!
To read more about Arizona bats click on the links below:
Bats and More Bats
Bat Conservation and Management
Understanding and Controlling Bats
Posted by Kathie Brown at 12:46 AM

What an amazing picture the first one is of the bat feeding from the Hummingbird feeder. Who would have thought it!! Great capture! Our Hummingbirds are now gone and it is a good thing as the temperature dipped below freezing last night.

This is just fascinating! I had no idea that bats would feed from a hummingbird feeder.

My hummingbirds have now headed south, too (from Massachusetts). Thanks for the great photos! I'll be back.

That is one awesome story, never thought to look for that to happen at the feeders!!! Really cool story!!

Wow, those are amzing photos of the bats at the nectar feeder. It's always cool to be able to solve a mystery.

How cool is that! Not only that they are there, but that they are into nectar. And you're getting great shots!
Most excellent!
Cheers, Klaus

Great report. Beautiful shots. Congratulations.
I feed birds. By night bats eat banana and papaya too.
That´s good. I love all of them.

thank you for feeding the bats!

I think they're adorable.

Hi Kathie..
I'm well impressed by the size of these bats... Jane will love this post when I show her later.... I'm glad you are feeding the bats as well as the birds... we sit in the back at dusk watching our tiny mouse-sized bats flitting around catching small insects and moths...

Omigosh! What a thrilling picture! How fortunate you are to see them.

You just can't trust a bat. I remember all those Dracula movies. I'll start checking our feeders at night too. We have had a lot of bee action around ours. Pappy

That is so cool! Are you going to get involved in the bat monitoring group to? I was so happy to read that you are going to keep feeding them, bats are such misrepresented creatures, they need all the friends they can get :)
I recently organised the installation of numerous bat boxes around the grounds where I work, hopefully the bats will find them one day soon.

I was so shocked to see a 'bat' at the hummingbird feeder! How interesting your story was. I would leave my feeders up too, if I were you. Why not! Thanks for sharing with us.

that's really cool, and you have some great photos.

Kathie, that is so fascinating. And to think these bats are endangered and in the midst of migrating. Great photos to chronicle the situation. It will be interesting to see if it happens again when they migrate either north or south (spring or next fall).

What an amazing site that must be! Are those fruit eating bats? I wonder if the same bats return each night while and they are resting up, or if somehow new bats keep finding the feeder?

What an inspiration this photography is to me. You are brilliant to think of this. I never knew bats would drink from something like this and they must have figured out this is a sweet way to live.

Your photography is brilliant. And it has inspired me to think more about who can see my feeder and who can get it.

Totally amazing photos! I quite like bats, at least the cute ones with the mouse-y faces. Not sure about those wild horror movie mini-monster species though. And loved the whole account of solving your mystery!!

Hello Everyone! Thanks for stopping by to see Gus' excellent photos of the bats. They are continuing to come by and they drain my feeders every night. I make a new batch of nectar every day to have ready for the next morning. The hummers want to know why their feeders are empty in the morning! They watch for me to come out and refill, then the hummingbird wars start all over again. At night the bats are so thick that Gus says they are "like ants on a cupcake!" I opened the door to let the dog out around midnight and could hear the whoosh of their wings. I turned the light on and kept watch over my little dog-just in case. No worries. The bats wanted nectar and not the dog. I want to see what else I can learn about them and will do a post once I find out. It's nice to see all of you. I am coming to visit.

What an amazing and unusual capture of the bats!

Can't wait for more updates on your bat visitors :)

This is a really inspiring story. I enjoy the fact that you are now doing shift feeding of your nec5tar- daytime for the hummers, night time for the bats. As far north as I am, the bats really aren't nectar feeders but insectivores. I always enjoy getting to see the bigger bats when I'm out in the desert.

Hello shellmo and celeste. I can't believe I am doing this myself, but the bats are still coming! Thanks for stopping by.

Doug, I was wondering when you would show up! Do you know if these bats eat insects also or just nectar? I keep on discovering that the desert is an amazing place!

Hi Kathie- As far as I can tell, these bats are almost exclusively nectar feeders.

Kathie - these bats eat only fruit and nectar, vital pollinators too.
check out:
http://www.batcon.org/SPprofiles/detail.asp?articleID=76

This is a great website for anything you would ever want to know about bats!

Doug and Celeste, thanks for that info. I see I will have some more research to do today.

Wow, that's an awesome photo capture. I think our bats in DC are only insectivores. Too bad they can't live on the hot air coming off the Capitol Building or White House, but it does help them fly better.