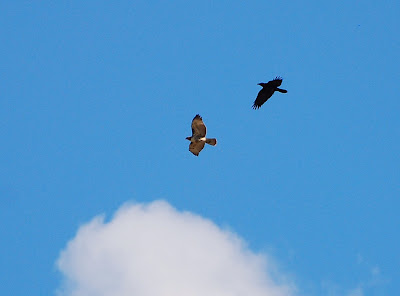 A Raven chases a Red-tailed Hawk in the sky over Rio Rico, AZ on September 14, 2008.
(click on photos to enlarge for best view) 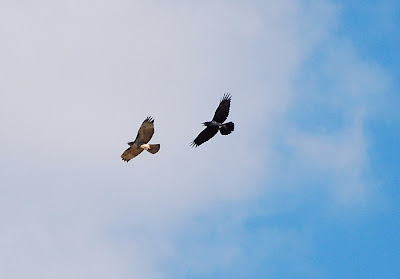 Notice the relative size of the two birds. The Raven is almost as large as the Red-tailed hawk. 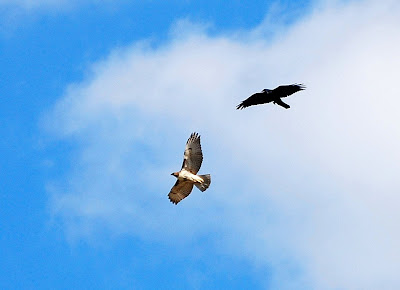 Notice the dark leading edge to the wings of the red-tail. While Red-tailed hawks can have many different color morphs, only red-tails have this. It is known as a "field mark." It is one of the first things I look for when I see a hawk soaring above. Notice how the flight feathers look like "fingers" on the raven. 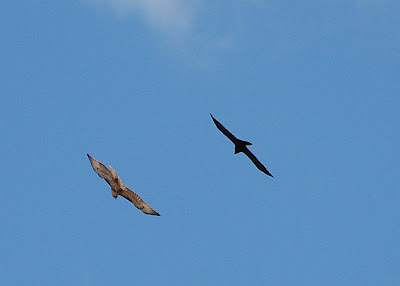 Look how the birds mirror each other in flight. 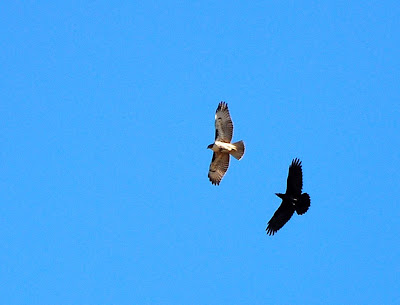 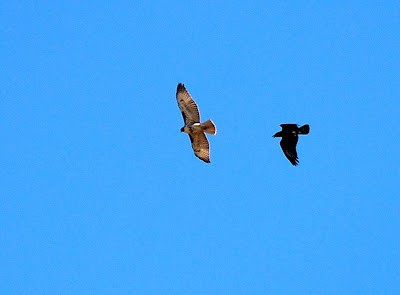 Common Ravens are usually in mountainous areas and Chihuahuan Ravens in more arid grasslands and brushlands. We were in the San Cayentano Mountains near the Mexican border. The terrain is arid brushlands and grasslands. There were other ravens perched on the utility lines, but only this one raven decided to harass the hawk. 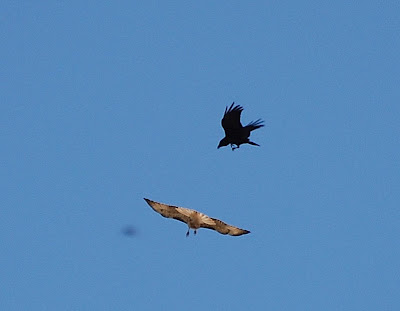 I like this shot of the raven diving feet first at the hawk. 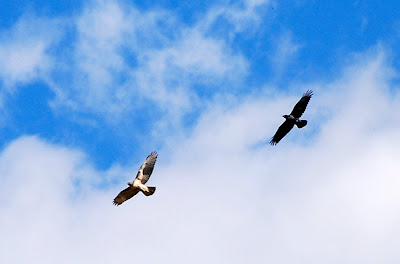 So, what do you think: A Common Raven or a Chihuahuan Raven? I don't think the hawk cares which species it is, it just wants to be left alone!


Click on the link to view more Skywatch Friday photos.

Photographer's note: All of today's photos were taken by Kathie using the Nikon D80 with the 70-300mm lens set in sports mode. The photos were cropped and enlarged. Most of them were sharpened slightly. One or two were automatically enhanced.

Wow what a great shot and just full of information. Thanks

I guess the one running (red tail hawk) never bothers to put the brakes on, wheel around, and pull out the stops and press talons to metal and chase the raven off. They should try that sometimes.

I reintroduced Better Blog Writing today but have not been able to do much on it as I pulled a hamstring muscle.

What amazing action shots! Love this series symbolising the power of flight!

Love the collection of shots. Nice birdwatching session you had here.

Beautiful pictures as always--you really know your way around that camera. I was just thinking this morning that you hadn't posted in awhile and then.........there you are.

That is one big raven! I love the way you describe the birds in such detail. Beautiful pictures.

Perfect catch for skywatch! Happy weekend! Mine's up too hope you can visit my corner too...

Kathie, these are great! Makes me want to go outside & look for shots like this!

Kathie! These shots are just fabulous. I'm always amused when ravens or crows chase these big predators around...

Sometimes it is so much fun to watch one bird chase another, until it gets 'out of hand'.

Very interesting, Kathie. We have hawks here, but I don't know about ravens. 'course, there is the possibility that I wouldn't know one if I saw it! Shame on me!

Great collection of photos, and thanks for the interesting information about these birds. You live in a great area for spotting these kinds of raptors. I was visiting in Arizona earlier this year, and I did see a raven, but I can't say which it was. Also enjoyed seeing (and photographing) a ferruginous hawk.

very pretty pictures I vote for the Hawk :)

They ar doing a spot of really good formation flying with a bit of dive bombing at the end. Well captured Katie.

Wowwee! What GREAT shots!!! That hawk looks like he's trying to get outta Dodge real quick. I never knew that ravens were such large birds. We've got some pretty big red-tails here and to think that a raven is almost that big is kinda scary! I don't think I've ever seen a raven in Ohio.

This is a lovely series of the Redtail and the Raven. Ravens often confuse me when I see them flying as they do appear to be so big. I often think I have discovered some hug hawk at first.

This is my favourite Sky Watch sequence in this week!

You were lucky to get them against such a pretty sky.

Fantastic series! Wonderfully done.
It's like Ballet in the air!
Cheers, Klaus

We saw lots of Ravens in the NW last week--their size is only appreciated against another large bird as you're finding them.

They were everywhere, landing in parking lots like gulls!
Walking on the backs and tops of all the cars.

what a great capture!

what a wonderful action series!!

A great set of pictures Kathie... I see our Sparrow Hawks being 'mobbed' by Crows at times... and our little Kestrals get chased by smaller birds... it's interesting to watch the flights of both birds when this happens

Cool sky shots with great points of interest. You should check out http://ramblingwoods.blogspot.com Michelle just did a great posting about hawks too.

Hi Kathie, incredible photos! I have never heard of a Chihuahua Raven before. So beautiful to see the birds with that perfect sky background.

Wonderful, wonderful captures of the sky and birds. I've never seen hawks and ravens flying anywhere near each other, let alone one chase the other. Terrific post.

Nice picture I tried to get picture of a hawk but no luck.

Mine is up and I have some coffee on.

Kathie, you have outdone yourself with that super photo series. I gert to see this mobbing behavior all the time where I live in northern California with the red-tails and the crows and ravens. The bald eagles are not immune either! Thanks for that "chase scene"

Great photos, Kathie. Birds in flight can be tricky to capture well.

fantastic series of photos! I was aware that a Raven is listed as having a bigger wingspan than the tail but I never get that impression when I see a raven. Maybe the all black color makes them aappear smaller than they are.-Great comparison photo.