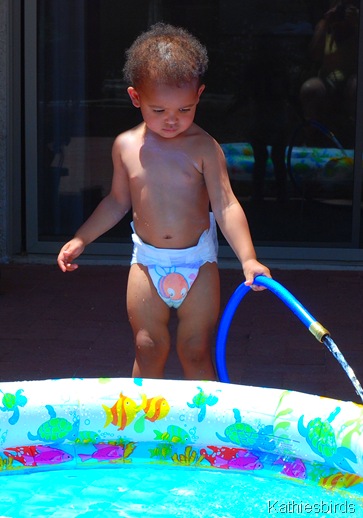 Since returning from Portal I have been out straight.  I came back that Wednesday night and barely said hello to my husband before falling into bed only to awake at 4:30 and head out the door for our second IBA survey of Sabino Canyon this month.  This time it was a Point Count Survey where we stop at 5 predetermined points along the way and count wherever species of birds we see within a 10 minute time frame.  This gives the scientist different data than when we walk the transect. I got up a bit late and missed the first 2 point counts but was able to participate in the last 3.

After that is was Memorial Day weekend and I spent the weekend watching my grandson while his parents went off to enjoy their birthday celebrations together. Xavier and I had a great time playing with his pool and he is already showing an interest in the birds!  His parents came back on Sunday and Gus and I spent most of Monday relaxing at home. We did take a walk Monday morning in Sycamore Canyon and as usual, I brought along my bins while Gus walked the dog. He and Blossom were soon far ahead of me and as I walked something suddenly fluttered up in front of me and landed spread-winged in the gravel alongside the road.  It’s pattern was cryptic, looking much like old bark or dead leaves.  As I drew cautiously nearer the thing raised its head and acted distressed, as if it had a broken wing.

I recognized the bird now as being a Lesser Nighthawk, but I had never seen one behave like this.  The way it was fluttering I was concerned that it had been hit by a car and had broken a wing.  As I ran through my mind who I could call to try to help the bird it suddenly flew up perfectly normal and landed a bit farther away beneath an ocotillo and glared at me.  As I heard faint peeps in the desert behind me it suddenly occurred to me what was going on here. The nighthawk must have a nest on the ground nearby and, like a killdeer, was feigning injury to lure me away form the nest!  I turned and scanned the desert behind me, not daring to step let I step on these well camouflaged babies.  Alas, I was unsuccessful in finding the chicks but thrilled at what I had witnessed! 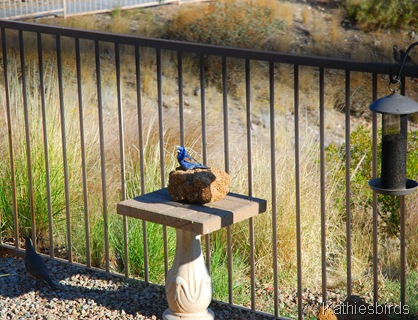 On Tuesday morning I awoke hoping to do some blogging but  remembered that my grandson needed to come again this day. I hurried about my morning routine of opening the shutters and letting in the daylight.  As I did I peaked out between the slats like I always do to see what birds are at the feeders before they fly off.  Imagine my surprise when I saw this beautiful Blue Grosbeak perched atop the quail block! I could barley believe my eyes, for I have never seen this species in Sycamore Canyon before and I have never had such a good view of the male bird ever!  I turned and grabbed my camera, which had the short lens on.  I poked it gently between the slats and snapped off a couple of shots. 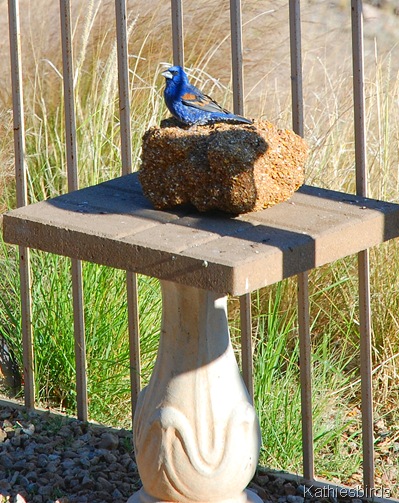 I can not believe the bird just sat there!  I quickly change my lens to the 70-300mm zoom and try once again.  All the time my heart is pounding and I am trying not to shake! 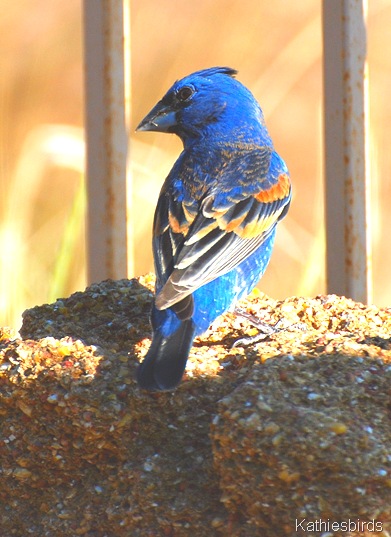 I manage to get off a few more shots without opening the slats before the bird finally sees me and flies away.  OH MY!  What a way to start my day! You can see more pictures of the Blue Grosbeak at my Sycamore Canyon Birds blog. I cleaned house like a banshee all morning before Xavier arrived for the afternoon. When he took his nap I processed more photos and started my blog post but he woke up before I was finished and it was late Tuesday evening before I finally got it posted.

I took a walk in the desert yesterday morning feeling the need to see what birds are hanging about.  I had not seen many Purple Martins so far this year and feared they had all moved away due to the numerous starlings I have witnessed here in the canyon.  The starlings have already taken over another Saguaro cactus that used to be home to the martins down by the park and the pool.  I hoped they had not taken over the other colony nesting sites I knew of in the Canyon. To my surprise and delighted the martins were there, chirruping and flittering about together in a friendly communal air-borne dance.  I found a community of at least 9 birds in one location, and another colony of 5 in a different saguaro.  This made me feel much better. They are not here for very long each year and I so enjoy their antics!

This weekend Gus and I are celebrating our 33rd anniversary which happened on June 4th.  It has been a long time since we have gone anywhere special together to celebrate but I got a crazy idea about possibly going to the Grand Canyon since I have never been there even though we have lived here for 3 years.  Well, we soon scratched that in favor of something closer.  Inspired by my trip to Portal and Rustler Park, I found myself craving the mountains and towering pine trees. And, with temperatures climbing into the 100’s and beyond this weekend, I want to go someplace cool. So, after a bit of internet research we made reservations for Payson, AZ up on the Mogollon Rim. Who knows what we will see or do. Tonto Natural Bridge is nearby and the Annual Sawdust Loggers Festival is taking place there this weekend.  I am sure we will have stories to tell and pictures to share.  Now that Gus and I both have our own cameras we can each photograph whatever interests us.  No more passing the camera back and forth or me asking Gus to find and photograph the rare bird I am seeing which flies away as soon as I try to point it out to him!

Have a fun weekend.  I will be back soon!

Xavier is very cute! Congrats on the Blue Grosbeak sighting and beautiful pics. We have Blue Grosbeaks here on the farm along with Indigo Buntings. I remember the first time I saw a Blue Grosbeak over 20 years ago, on another horse farm. I'd only heard of Rose-Breasted Grosbeaks and Evening Grosbeaks. I was amazed to see one that was all beautiful indigo blue except for the brown wing bars.

What a beauty that Blue Grosbeak is. I remember seeing them around Prescott, but never in that nice of plumage. Great job!

Sweet Bay, Xavier is my best excuse for not blogging. Also, I did not know about Blue Grosbeaks until I moved here, but this is the best view I have ever had!

Idaho birder, that deep blue color is so amazing,isn't it!

Xavier is a cutie.

Happy Anniversary to you and Gus. Hope you have a wonderful weekend celebrating!

You have certainly been on a roll seeing many beautiful birds.

Regarding your last post and your encounter with John Law...have you considered using that cruise control button? I wouldn't even hazard a guess at how many tickets this lead foot has avoided because of cruise control.

Xavier is a real cutie. You'll soon have a pupil for instruction in bird lore.

Kayleen, I do use cruise control when on the highway and believe me, I used it all the rest of the way home that day where appropriate!

Bobbie, I put Xavier's photo up just for you! Glad you stopped by! How I wish you could see a blue gosbeak in real life. The color is stunning.

That blue grosbeak is gorgeous! You see the most amazing birds. Have a great time in Payson and Happy Anniversay!

Gaelyn, we are having the best time and I am in love with Payson!

Great bird Kathie. congrats on a new bird for the list!!

Kathie, I am breathless just reading about how busy your life is! So lovely to have your beautiful grandson with you for a while and congratulations on your anniversary. It is good to do something special to mark the occasion. Hope you enjoy being at a cooler altitude.
There you were about to compress your housework so you could enjoy an afternoon with your grandson and Gods starts off the day for you by giving you a present of such a beautiful bird first thing in the morning.