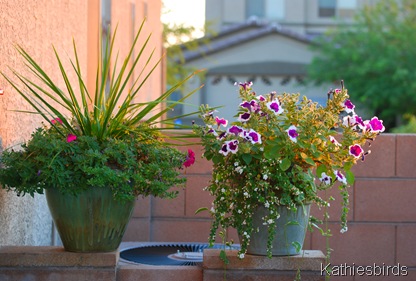 It is the hot time of the year now. Every morning I wake up and fill bird baths and water flowers. The brittle bush has dried. The grasses are drying. The afternoon sun blazes like a flaming sword. Ocotillo have dropped their leaves. The ground lies parched and the desert is waiting.

The mornings are the best time of the day while the air is still cool and the birds are still active. I find my feeders full most mornings and I delight in the antics of the birds. Parents are bringing chicks to the feeders. I have seen Gilded Flickers feeding chicks in my yard as well as curve-billed thrashers and Gambel’s Quail. There are the usual House Finches and House Sparrow chicks as well as Lesser Goldfinches. Recently the young Verdin have been arriving with their plain gray heads and wide mouths with a bit of the yellow gape of a juvenile still showing at the corners. Costa’s Hummingbirds are returning after being absent for almost 2 months during their breeding season. I had taken down all but 3 of my feeders but now I fight with the ants to keep them full for the hummingbirds. I can barely stand to see the hummingbirds come and hover near where a feeder used to be and have them finding nothing. I have taken pains to plant vegetation that would be attractive to hummingbirds and so have seen them feeding from the Whirling butterflies (guara), salvia and honeysuckle. 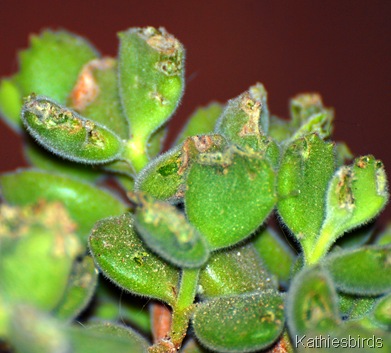 But in the afternoon, the birds pant from the heat. They seek refuge in the shade of my covered patio and eat the swollen green leaves of my potted succulents. I have one with the common name of “Bear paws” that I do not think will survive their hunger and thirst. House Finches can be ravenous eaters of greenery as I previously learned. The birds are waiting. 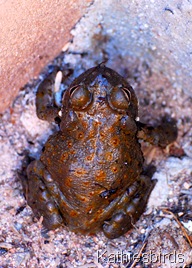 The toad I mentioned in a previous post was here again the next day and I was able to get its photograph. It is a young Sonoran Desert Toad but apparently it is camera shy for I had not seen it since I took this picture until tonight when I heard and then saw it hopping about in the flowerbed beneath the mesquite tree. As long as it eats crickets, it is welcome here! But the Sonoran Desert Toads have not started to sing their desert song yet. They need the Monsoon rain to bring on their frantic mating cries. This young toad in my yard is here because I water my plants and it is deceived into thinking the Monsoon has come, but the wise adults have not emerged in the rest of the desert. The Sonoran Desert Toads are waiting. 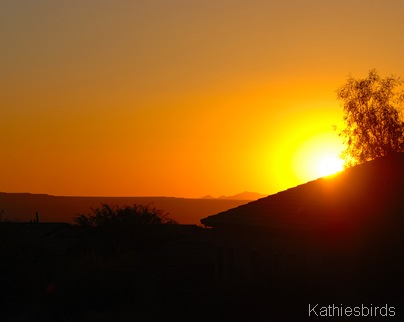 Though the afternoon grew hotter and hotter I barely noticed as I stayed inside and worked with the air conditioning running but as evening came on I went outside to watch for nighthawks skimming insects from the air, and though I watched for 20 minutes after sunset I only saw one bird. Now the night has fallen, a crescent moon hangs in a velvet sky, and a cool breeze wafts over the yard and plays around the corners of my house. Soon the Milky Way will rise and brighten this dark and cloudless night. The Monsoon officially started yesterday but there is no rain in sight. Until the dew point rises to 54 degrees for 3 days in a row and the wind changes directions and flows from the east we are in Monsoon Season in name only and like the rest of the desert, all I can do is wait.

The waiting is tangible in your beautifully written post Kathie. I do hope someday you write a book in just this vein. There is such great tension in the flow of your words, that the book would become a best seller.

Your description of your place in words and pictures makes a marvelous post.

Although the heat of summer has arrived there your yard still looks like an inviting green space. Not a bad place for waiting.

A very descriptive post Kathie, I can close my eyes and I am in your garden watching all those wondrous sights you've just described.

Arija, your compliment is overwhelming! Thank you so much. Just before I recieved it I was thinking about how I love writing more than anything! Your words validated my thoughts and feelings!

Abe, that is quite a compliment coming from you. Thank you!

Gaelyn, no it is not and more and more birds, bees, toads and bunnies are arriving and waiting every day!

Denise, well, you are welcome in my garden any time, whether for real or in your imagination!

Dawn, doesn't it look like you could slide right into it!