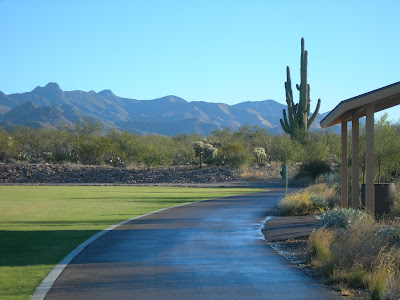 Late yesterday afternoon while the guys were watching football I decided to take Blossom for her evening walk. We hadn’t been to the park in a few days, so off we headed for the grass. She usually likes to go there to smell all the places the other dogs have been. The sun was just setting at the western end of the park as I walked onto the paved track that encircles the grassy area. A huge flock of mourning doves were gathered on the lawn and as I started to walk the track I noticed movement at the far end. I had to shield my eyes from the setting sun but that’s when I saw the coyotes—2 of them! I did not fear for myself but Blossom’s safety was cause for concern. Everything I have read says coyotes will attack and eat small dogs like her. I wanted to sit and watch them romp, but turned and headed back toward the road and home. I called Gus on my cell phone to come pick me up because it was only a short trot across the grass and a slim strip of desert for the coyotes to get to us. It wasn’t long before he was there. I guess I’ll just have to walk Blossom closer to home from now on.

As I headed for bed last night I took a quick peek out the back door. After 48 hours of constant wind the velvet night was now so still. I could see the stars brightly shining in the cool night. By morning I had to add an extra blanket to the foot of the bed because our room was so chilly from sleeping with the door cracked about 4 inches. As soon as I wake up I am out the door again to see what the day is like. The sky has not yet begun to lighten and a slight breeze has picked up. I see a falling star in the northern sky as I gaze at the big and little dippers.
Later in the morning as I bustle about my kitchen I smile to see a male Costa’s hummingbird show up. I think he is the same young male I saw coming to the feeder yesterday for he has this bit of fuzzy down poking out the back from the crown of his head giving him a punk-ish look. I’m totally enthralled with these tiny feathered emeralds.
I busy myself about the kitchen once again and as I turn to put another batch of Christmas cookies in the oven I see a large bird walking along the top of the block wall. It isn’t the shape of a mourning dove but more upright with a little question mark sprouting from the top of its head. I can’t believe my eyes. A Gambel’s quail! I rush to the den to retrieve my camera but freeze in my tracks, my jaw slack, when I see a whole covey of quail feeding at my quail block and beneath my seed feeder. They scratch away in the soil and peck at the quail block. All the while the little question mark plume atop their heads bobs up and down with the motion of their feeding. While I have seen coveys of quail numerous times in the desert around here, this is the first time I have seen this many at my house. There are between eight and ten birds! Prior to this I have only seen 1 pair feeding here, and that was months ago.
This afternoon as I am returning from town, I decide to drive down to the park to see if the coyotes are there again. I park my car and get out with camera and binoculars in hand. I have arrived earlier than yesterday and the sun is still above the horizon. The sprinklers are running in the park making the grass glisten with their spray. No mourning doves or coyotes in sight, but I walk the perimeter anyway enjoying the peace of the empty park and the long shadows cast by the late afternoon sun.
For the moment there are no houses near the park. It is still surrounded by undeveloped desert. I don’t know how long it will be this way, but for now its beautiful. The Santa Rita Mountains rise t 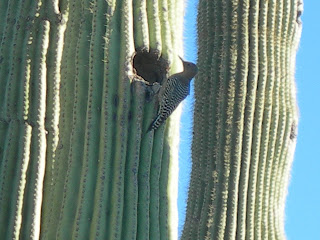 o the south, while the northern horizon is rimmed by the Catalinas. Huge saguaros spot the desert around the park. At the far end is one down a bit of a gravel path and it is here that I see a Gila woodpecker clinging to the edge of a hole in one of the saguaro’s arms. Its back is to the west as if waiting to catch the last warm rays of the setting sun. I creep ever closer and quietly snap a picture. It doesn’t seem to mind, but then decides I am too close and flies farther up the tall saguaro to another hole where he laughs his squeaky laugh at me.
I head back to the pavement and continue the rest of the way around the circle. I am on the south side of the park now, and to the north through the sparkles of spray I see two ravens fly in and land at that edge of the grass. Have they come in for some water? I watch them walk and strut on the lawn in their sleek black suits. Perhaps they are the desert version of the Mafia. They look as if they are having a conversation with each other. As I near the car another movement catches my eye. This time it is a cactus wren in a spikey cholla cactus. It hopes down to the ground seeking who-knows-what in the grass and weeds. Then a curved-billed thrasher comes out from behind a prickly pear near a mesquite tree. It starts to taunt the cactus wren, but upon seeing me it retreats cautiously to the cover of the cactus once again. The bold cactus wren is undisturbed. It is joined by another and they continue to hop about searching the ground for insects.
The soft hiss of the sprinklers follows me as I head back to my car. In the short time I was there the sun has sunk even lower and with it the temperature. I’m feeling chilled as I get into my car, but internally I am warmed by beauty of this place.
Posted by Kathie Brown at 8:57 PM