The Society of Birds 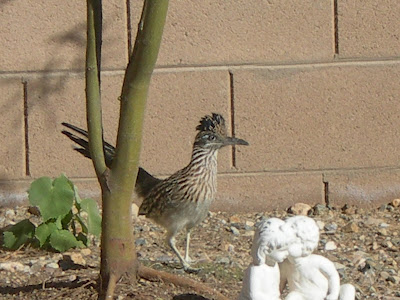 I thought with the cold weather the crickets would disappear, but they are still here, though smaller and more sluggish. Still, when night falls they come in towards the heat around the unsealed trim boards by the front door. We are planning on contacting our builder to come fix that defect, but for now we crunch crickets at night. Gus has wanted to spray, but I refuse to let him. All we need to do is seal up the house and they won’t gain entry, and I refuse to have chemicals in my yard because of the birds.

What a cool bird to have around your yard.We have nothing of the sort in CT. Nice photo too!

Larry, it is an awesome bird. I saw it yet again today as it prowled along the top of the block wall. I was born and raised in CT and never saw a roadrunner until last year. They are formidable hunters-amazing to watch. Thanks for your comment!
Kathie