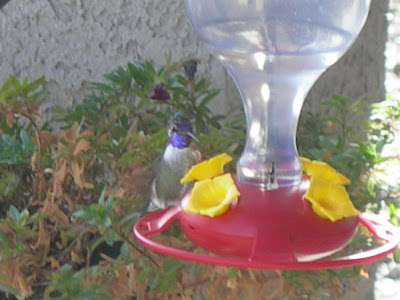 With all the feeders around here there is naturally a certain amount of bickering among the birds over the best spots. Still, the woodpeckers mostly eat suet and peanuts, the finches eat thistle seed and sunflower seed and the hummingbirds sip nectar. Yesterday that all changed when I observed a Gila woodpecker dangling from the hummingbird feeder on the patio! Twice within the last 2 weeks I have had to pick the nectar feeder up from off the patio floor. I didn’t know how this had happened, but the sugary nectar created a sticky mess all over the cement. Now the mystery was solved. I watched as the Gila woodpecker grasped the thin perch that encircled the feeder from beneath. His posture reminded me of a bat clinging to a cave wall. Then, he curled his body up over the edge, cocked his head just so, extended his neck in an arc and with his bill barely reaching the plastic flower, he proceeded to sip nectar from one of the ports.

Quietly I called to Gus to come and see. He was able to watch from the picture window in the great room. We watched dumbfounded as the woodpecker stuck his tongue in and out of the tiny port drinking nectar. I could actually see the nectar level falling the longer he clung there and drank. A Costa’s hummingbird flew down and scolded him, but still he clung and drank. Then another Gila woodpecker flew over and chased the first one away and quickly took over the feeder for himself! I would have loved to get a picture, but I knew if I moved the birds would fly off and I wouldn’t be able to witness this moment.

This morning dawned cold and clear. The forecast was for a low of 29 degrees but at 8 a.m. the thermometer under the patio read 32 degrees. I replenished all my feeders yesterday but I noticed the birds flying in to the birdbath for a drink seemed unable to get one. I kn 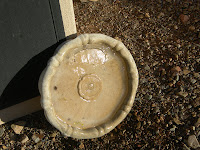 ew I had just filled the bird bath yesterday, so I wondered why there was no water. A look through my binoculars revealed why. The water was frozen! Poor birds! It was just after sunrise so I quickly dressed and went out to thaw the birdbath. It wasn’t easy. I set it on its end in the sunshine and poured two gallons of warm water over the ice before it melted. Then, I positioned it back on its pedestal and refilled it with warm water. I was barely back in the door before the birds were landing on the brim and drinking once again. Later this morning when Gus was out doing errands he called me from his cell phone to tell me he had just heard the following statement on a local radio station: You know your kids were born in Tucson when they get excited about seeing the birdbath frozen in the morning! Well, I’m not a kid and I wasn’t born in Tucson, but it did add a bit of drama to the day!
In the backyard the finches and house sparrows fight for position at the feeders. When the Gila woodpeckers fly in everyone gets out of their way. They swoop onto the suet, or land on the block wall and jerk their heads from side to side in an inverse arc as if daring anyone to mess with them. The only bird that seems to be able to muscle its way past Gila woodpeckers is the Gilded flicker. It’s larger than the Gila and seems to be able to take over whenever it appears, which isn’t very often. 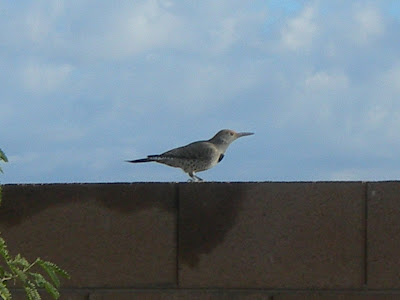 The morning doves stay mostly on the ground searching for seeds that have fallen. But sometime hunger drives them to try the feeders. I mostly have feeders that prohibit their larger bodies from landing on them, but they are quite inventive and will also twist and torque their bodies to get at seed. This morning they shared the ground outside the den with a covey of Gambel's quail. The quail always make me smile as they scratch so busily in the dirt. They peck and shift positions, each bird believing the others have the better spot. It is a frantic feeding, unlike the more sedate mourning doves that peck a little here, and peck a little there, then take a nap.
The fiercest fighters are the hummingbirds. They guard the feeders diligently and buzz off any contenders. It matters not to them if I am outside or not. They swoop past my ears in a fury if another humming bird gets near. I’ve seen the hummingbirds position themselves as lookout on the mesquite tree or even on dry stems in my flower pots. On female Costa’s has staked out a post on the verbena near the kitchen window. She sits with her back to the glass and darts her head from side to side in a sweep of the surrounding territory. If another hummingbird appears, she flies into attack mode and they buzz off together into the wash.
There is never a dull moment here with all these birds, but it reaches high drama when the Cooper’s hawk swoops in. Then the birds scatter like in an explosion to various points in the sky. So far the Cooper’s has been unsuccessful, but odds are that one day it will catch a bird. If I am here to witness it I will certainly have something to write about that day! I did witness the event one day in Utah along the Wasatch Front.
We were living close to the Wasatch Mountains in an older neighborhood with many tall pines, large cottonwood trees, a few aspen and one towering poplar. The pines were planted in a row down the east side of the property that sloped off sharply in a long and narrow back yard. Off the dining area a slider led to a deck where I had a bird feeder positioned hanging from a hook. It was a snowy evening in early winter and the birds were in a feeding frenzy before they roosted for the night. Suddenly the hawk swooped in and struck a bird. The little finch never knew what hit it. The Sharpie carried the bird over to the nearest pine and positioned itself on a large bough, its back to the interior of the tree, its eyes facing outward. In the waning gray light I watched the hawk though my binoculars as it ripped the breast feathers out and tore open the bird’s flesh. All the while the snow fell softly forming a gauzy curtain between the hawk and I. Still, I was able to see the hawk’s head and breast slowly stain with blood. I must have watched for 15 to 20 minutes as the hawk devoured that bird. It put me in a moral dilemma of feeling sorry for the small bird but glad the Sharpie was able to eat that night. He, too, needed food for energy and warmth to get through the coming snowstorm.
Posted by Kathie Brown at 7:01 PM