Winter Visitors and the Dreaded Bird 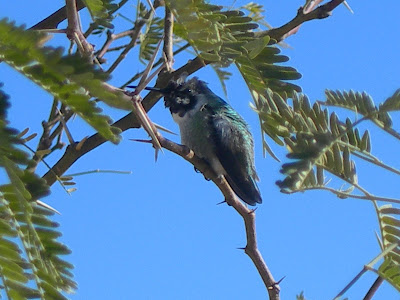 With cold days and even colder nights the birds are flocking to the feeders. Suet, seed and nectar are constantly replenished. Costa’s hummingbirds are the most frequent nectar feeders, though sometimes I see an Anna’s and I wonder if I am seeing a female of a different species. Since most of the females look the same it can be hard to tell, but I notice the difference in size and the length and curvature of the beaks. One species has a short and straight bill, the other a longer and more curved bill.

This morning the yard was full of the usual suspects, but then a new bird landed in the back yard and my heart filled with dread. I thought I had seen one of these fly overhead a couple of nights ago, but hoped I was wrong, but I wasn’t. There standing in my back yard was a street pigeon! A big black thing, it flew up to the roof of the house, then I spotted it at the feeder on the north side of the house and another pigeon was with it! If these birds decide to hang around my house, I will have to take my feeders down, for they will make a huge mess of everything with their droppings. They will take over the feeders and soon all their relatives will join them. However, they didn’t hang around for long and I am hoping the reason was they didn’t find any food that appealed to them. Since I feed mostly thistle seed, suet, and peanuts in feeders that are not accessible to them I hope they were disappointed and won’t come back. What I can’t understand is how they found my house out here in the desert so far from town. It doesn’t seem there is anything to attract them to this area. I couldn’t help thinking, where is that Cooper’s hawk when you need him!

Shortly after the pigeon left I spotted a lesser goldfinch sitting on the floor of my patio in a daze. I had not heard it strike the window and I didn’t see any marks on the glass, but it certainly behaved as if it had struck somewhere. Though it is warmer today than the past 4 days have been it is still cool in the shade and on the cement, so once again I went outside to rescue a bird.
Its feet were curled beneath it, and while its breathing was rapid, its eyes were closed. 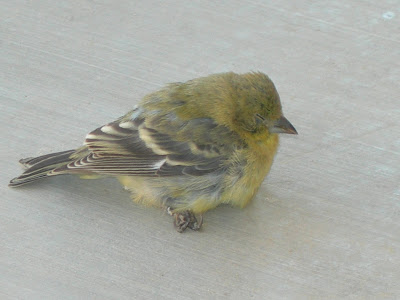 I gently scooped the tiny bird up. This is the first time I have ever held a lesser goldfinch. 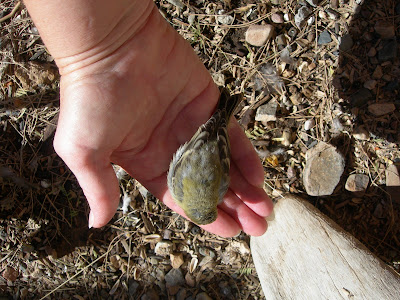 I brought the bird out to the sunshine and set it in a corner under the mesquite tree. 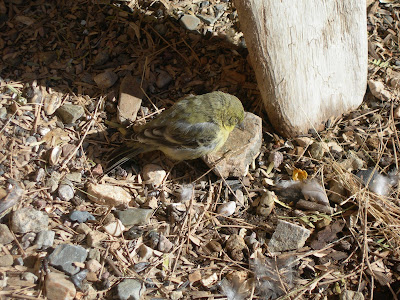 Then I stepped back to watch from a distance. While I was standing there some other goldfinches flew in and landed in the mesquite tree no more than 3 to 4 feet from me. Then a male Costa’s landed about 3 feet from my face! I only have a small digital camera but I was able to snap some remarkable pictures because I was so close to them. 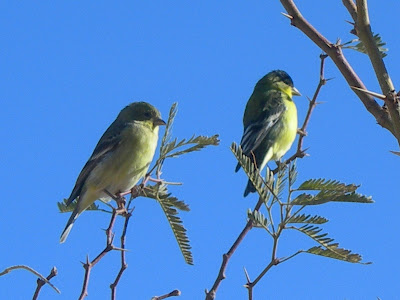 As for the little goldfinch? Gus and I went into town for errands. When we returned five hours later it was gone. I can only assume it eventually came to its senses and flew off with the rest of the flock.
Posted by Kathie Brown at 10:48 PM