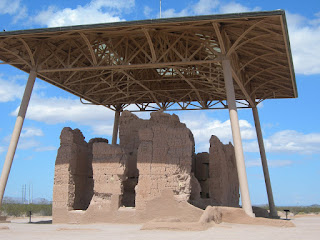 Gus and I drove to Coolidge today under dusty blue skies that veiled the distant mountains. We visited the Casa Grande Ruins at the north end of the main street in town. A yellow sun burned brightly on us raising the temperature 7 degrees in less than an hour. While I have been here before, it is Gus’ first time. We wander among the ruins of another time. Low mud walls outline the homes that made up the settlement, and towering over all of them is the Casa Grande. 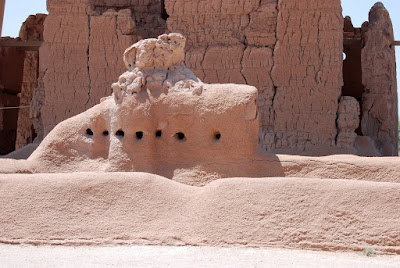 The Casa Grande or “Great House” is a four story building 60 feet long that was built with its four walls facing the cardinal points of a compass. During the summer solstice a circular opening in the west wall aligns with the setting sun. Other openings in other walls align with the moon and sun at various times of the year. It is speculated that the great house was used to contemplate the heavens and perhaps as a calendar to determine planting times. 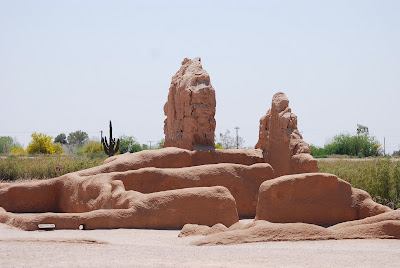 The Hohokam lived in villages with huts made from the caliche beneath their feet. A mixture of sand, clay and limestone, caliche forms a cement like compound that is very sturdy. The great house took 300 tons of caliche to build it, with other mud huts and a fortress–like wall surrounding the whole village. The Hohokam lived along the Gila and Salt rivers and used a series of irrigation canals to bring water to their crops. On the grounds of the Casa Grande ruins is an oval “ball” court where some sort of game was played. 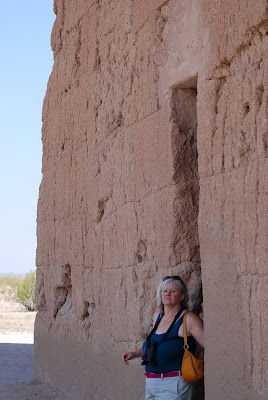 While Hohokam culture dates back to 300 A.D. The great house was constructed prior to 1350 in what is known as the classic period of Hohokam culture. In 1694 Father Eusebio Kino was the first European to see the crumbling structure and document its existence. In the late 19th century it was a well known landmark for those who crossed the desert heading west and travelers collected artifacts for souvenirs and scratched their initials in the crumbling walls. In 1892 the Casa Grande was put under federal protection and became the first archeological preserve in the nation. 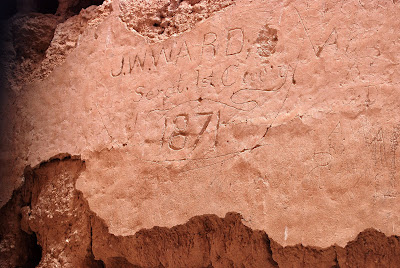 Standing here today under this heated sky I seek shelter in the shade of the Casa Grande. The doors are all barred to prevent vandalism and a steel canopy towers over the ruin to protect it from sun and rain. The caliche walls are home to several birds. I have seen great horned owls in the rafters here before, but today I hear the squawking of starlings coming from the interior rooms. A swallow flies swiftly past and disappears before I can determine the species. A kestrel alights on one of the steel girders that support the roof. Another flies over and lands nearby. The two birds exchange something and the second kestrel flies off with a lizard-like shape dangling from its talons. Meanwhile the first kestrel stares down at us while Gus snaps off a few shots. 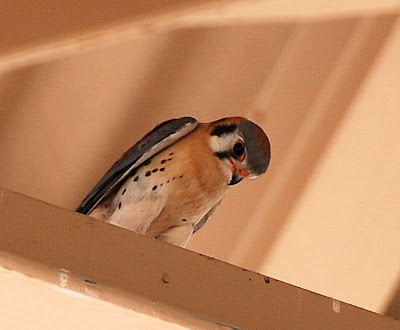 Since it is getting warm we don’t stay long and we wander back out towards the parking lot.

Here a lizard in a tree catches my eye and I call Gus over. He captures a few shots of mister lizard while I search the mesquite trees for more birds. I see a female hummingbird and an orange-crowned warbler. 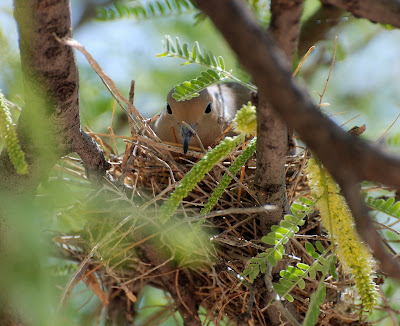 Gus finds a mourning dove in a nest staring down at him as if she were a hawk about to rip his eyes out. Her flimsy nest is built in the low branches of another mesquite tree. I wander over to the elevated sidewalk that overlooks the ball court where I discover a bullock’s oriole feeding on the nectar of ocotillo blossoms. 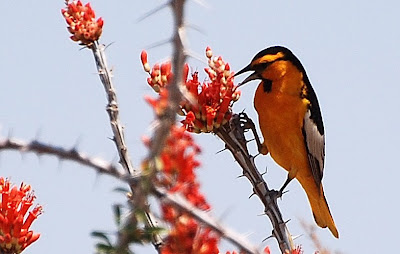 I call to Gus and he is able to walk over without scaring the bird away. I watch the bird through my binocs while Gus captures the beauty of this tangerine, black and white male on the fiery orange blossoms set against the dusty blue sky. 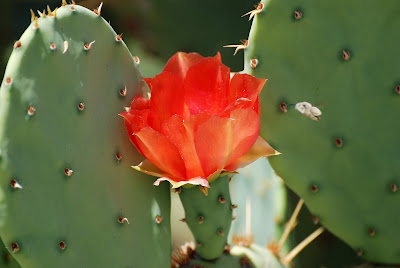 The prickly pears are already in bloom here in Coolidge, which tends to be warmer than Tucson, so they are about 2 weeks ahead of us in the growing season (I would guess). The blossoms are buzzing with insect life giving off a steady hum if you get anywhere near the plant. I notice that some prickly pears are blossoming yellow, while others have a flaming orange bloom. 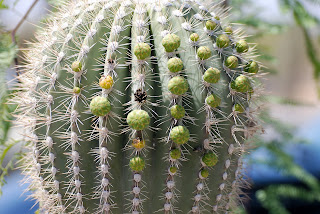 The saguaros are putting forth their buds also, looking for all the world like a giant pin cushion with Brussel sprouts stuck to the pins! When the blossoms finally open their similarity to Brussels sprouts will quickly give way to a creamy white- rimmed goblet shape with a yellow pollen center that attracts birds, bees and bats. This fierce desert is alive with color and wildlife in these pre-summer days before the 100 degrees plus temperature will drive man and beast into the shade. Even now the rising temperature is making me know that it is time for us to get into the coolness of our vehicle and head home. 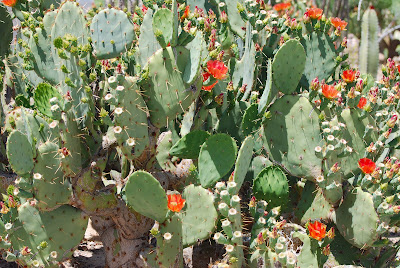 Interesting post. And interesting part of the world. I am from the UK. I visited Arizona about 10 years ago. I loved visiting the Navajo people the best. I didn't get to visit the settlement mentioned in your post, unfortunately.

Hello Tex! Thanks. Did you see that I added a link to your blog on my new poetry blog? http://kathiespoettree.blogspot.comI like your poems. Please keep writing and posting them.

eamon, Thank you for visitng my post. I hope it brings back happy memories for you.

Kathie, this post is loaded with interesing history but what I loved most of all was the dove in its nest. Your photos are downright wonderful. That Nikon D80 is priceless.

Your birds are stunning!

What an interesting place, and the bird and flower pictures are gorgeous!

Sounds like a wonderful way to spend the day! The ruins are very interesting....but the wildlife...AWESOME! That bullock oriole is absolutely stunning! WOW!

Such an inspiring post. The photography is stunning, as always. I've not been to Casa Grande. It looks like that now needs to go on my must see list.

What an interesting post. I would love to visit this area. Your pictures are brilliant!

It does! Arizona is one of my favourite places. I had a really great time there travelling around with my friend.
Met a friend from back home in the UK on the Grand Canyone (coincidence). World is pretty small place (even though the Grand Canyone is huge).
Then we went to this place where you slide down a natural water slide (that was brilliant - and I don't think we even had to pay for it).
Loads more ..
And of course, the Navajo people, as mentioned.

Interesting ... but the Kestrel and bullocks Oriole stole the show. Great Photos all around!

So fabulous! I especially love the pictures and information about the ruins. It's so easy to think of ours as a fairly recently settled country. Native Arizona history is a really important reminder of how long thriving civilizations have existed here! Thanks much.

The ruins are so wonderful. I stared at the photo of the intitials carved into the wall and wondered who that person was and what his life was like. How fascinating!

We have a mourning dove nest in a spruce tree across the pond and we are watching it closely. I'll have to keep the cats inside in a few weeks so the fledglings can finish growing up! I lvoe this time of year for all the bird activity.

Mary, I'm so glad you enjoyed this post. That Nikon D80 is great and we don't even know how to use it yet! We bought a book about it that is a most as thick as a novel!

Ruth, thank you! I love sharing all of this.

Kerri, welcome to Sycamore Canyon! Glad you enjoyed your visit. Yes, the wildlife is awesome and one of the reasons I love living here.

Doug, it's small but interesting. Half the ruins are actually buried to protect them from deteriorating further. Still, there is a lot to see and I bet you will find some interesting insects there. If not, its not much further to Boyce Thompson Arboretum which is loaded with biodiversity!

Sandpiper, I really hope you can come someday, and if you do, please let me know, I would love to meet you.

Eamon, hello again. That natural water slide sounds fun. Believe it or not, I haven't been there yet! It's on my to do list if my husband ever stops working overtime! We have only lived here for a year this month, so there is still so much to see and do.

Jalynn01, I do love that kestrel!

Kathryn and Ari, it was a wake up call to me when I first realized that European history and Native American history are 2 different things. Quite an eye opener, ay!

Amy, I thought the same thing. Who were these people? What were their lives like? Who did they love and what did they dream about? I think that is why I love blogging so much, I get to meet all kinds of interesting people and get some of those questions answered.

Wonderful and very informative post!! Love all of the cacti!

Great bunch of photos, I really like the ones of the blooming prickly pears.

it's amazing what past civilizations were able to do. Sometimes I think we overestimate ourselves and underestimate people form the past.That is such a cool Kestrel photo!-All the other photos are great too.

Aunt B, the cacti are beautiful this time of year.

John, these blossom make it easy to get good photos. I'll tell Gus you liked them.

Larry, are you an archeologist at heart also? I, too, am amazed at what "primative" societies could do. That kestrel had the prettiest face I've ever seen. Glad you enjoyed this post.

Your skywatch photo looks like a genie. Great shot. All the photos are beautiful!

I would love to be on an archaeologist dig.I'm always watching those sorts of programs but my wife usually changes the channel on them.The ruins of historic areas are always fascinating to me.

some of yr pics are breathtaking!!! gr8 work!!