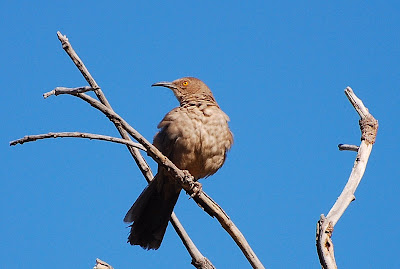 We told ourselves we would take it easy the next day, but we were both up at sunrise and out the door by 8:30. I drove Kathryn to Saguaro National Park East where we decided to hike the Freeman Homestead Trail instead of driving the 8 mile loop road. I had seen a great horned owl nesting in a hole in the cliff when I first hiked here at this time last year and hoped to find it again. Blacked-throated sparrows tinkled a welcome as we stepped from our cars and started down the trail. In the distance a cactus wren cackled noisily from atop a cholla cactus. Ahead of us we spied some birds, all in the same general area. In the foreground a curved-billed thrasher sat atop the bare branches of a dying tree. Nearby a loggerhead shrike 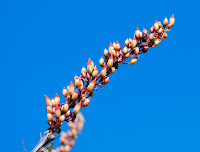 clung to an ocotillo in bud, while in the distance a gilded flicker perched atop a saguaro. Later on I would discover there were actually two flickers on the saguaro when I enlarged the photo I took at home. One was hiding on the backside of the saguaro with only the edge of its head showing. Perhaps a nesting pair? They do nest in holes excavated in the tall saguaros. The saguaro soon heals the wound created by this excavation forming a woody “boot” inside that lingers even after the saguaro has died. It is possible to find these “boots” on the desert floor or for sale in garden shops and at farmer’s markets by those fortunate enough to find them. 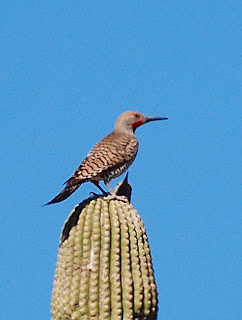 We descended the dirt trail down to the level of the wash where the former Freeman adobe cabin had stood on a little rise above the wash. A large Palo Verde now shades the empty foundation of a former life. In this tree a Gila woodpecker laughed at the morning while we walked calmly past. Here the path is hard packed caliche, but down in the wash the shifting sands slid beneath our feet. A flash of red caught my eye as I saw a cardinal fly from a bush into even thicker cover and out of sight. I scanned the walls of the sand cliff above us for the owl, but all the holes were empty, save for some busy bees that have made a hive in one hole. I wondered if they could be Africanized bees, which are quite prevalent around here. However, they were far above our heads and we had no intention of molesting them. We padded onward. 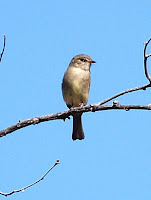 Up the dry wash we walked looking for all the birds we were hearing. A ladder-backed woodpecker flew to the Palo Verde the Gila was in. The buzzy call of a gnatcatcher caught our ears and then its form caught our eyes. I was surprised to see a blue-gray gnatcatcher as black-tailed are the more common variety around here. Along the wash we found a canyon towhee hiding in the scrub. Bell’s vireo and Hutton’s sang and hopped among the new leaves emerging from mesquite and other trees. A small flycatcher sat on a branch before us and I was at a loss to identify it. I took a photo to examine at home and decided it was a gray flycatcher due to its shape, colors, habit and habitat. So many of the flycatchers are so difficult to distinguish unless you hear them call and know their voices. 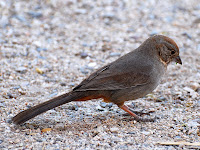 We’d been down on the trail for a couple of hours with the sun growing stronger by the minute. We hiked back up to the street level and drove to the Javalina Picnic Area to have a cool drink of water and eat our snacks in the shade of a covered picnic table. While we sat there chatting and discussing what birds we had seen and what to do next, a canyon towhee hopped out of the bushes and towards our picnic table totally at ease with us sitting there. Gambles quail darted 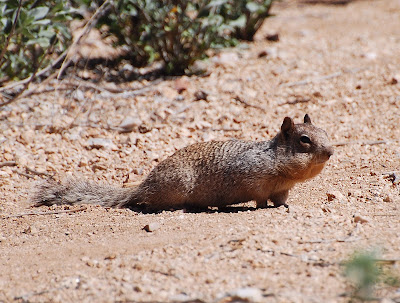 across the path from one side and then back to the other. Then, a rock squirrel came creeping out of the brush and rippled across the dirt with a mouth full of something bulging its cheeks out to the max. I have seen this elusive species of squirrel twice before but was unable to snap a photo. This time I was close enough and quick enough to get a good shot of this unusual animal. 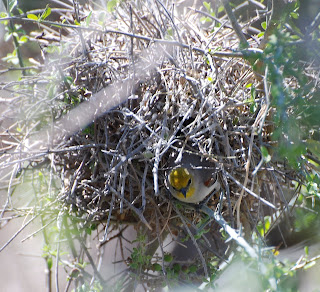 We relaxed in the shade of the covered picnic table for about twenty minutes, then decided to head for Aqua Caliente Park, where we could bird from the shade of the palm trees looking out on cool waters. When I was there in January I counted 30 species of birds. Since it was the middle of the day on a Friday, I thought it would be relatively quiet, but I was mistaken. As we drove into the parking lot I saw 4 or 5 buses parked around the lot. Several loads of school children, families and others roamed the paths and filled the picnic tables. My vision of a shady and quiet birding experience at a desert oasis was quickly shattered. We took a quick walk around the park and counted only 13 species with the highlight being Kathryn’s first Phainopepla near the parking lot and a Verdin pair going in and out of their nest in a 200 year old mesquite tree which is walled off to protect it. This particular mesquite is rumored to be the oldest living mesquite in “The Old Pueblo” as Tucson is called. Its many weighty arms are held up by steel poles and brick supports. It makes a perfect private area for nesting birds and we watched them 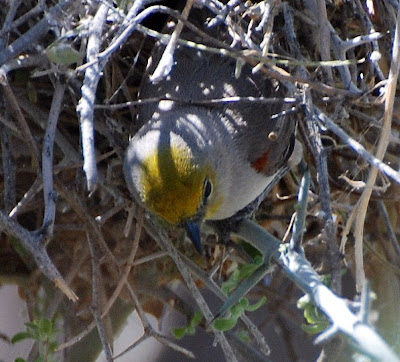 from outside the wall without disturbing them. The Verdin make a ball shaped nest lashed between twigs with an entrance hole at the bottom. If they don't like this particular nest they will just build a new one until they have constructed one that is suitable. Verdin are a small gray bushtit with a yellow wash on their heads. Their shoulders sport tiny red epaulettes that are not always visible. Verdin eat insects, drink nectar and sometimes visit hummingbird feeders. Other than when they are nesting, they are a solitary bird and never seen in flocks like other bushtits.

We headed home for a late lunch with a total of 23 bird spotted at the Freeman Homestead Trail, 6 at the Javalina Picnic Area, and 13 at Agua Caliente Park.
Posted by Kathie Brown at 8:30 PM

That was an incredible post! I think my favorite part is about the Verdin! Very interesting their nest construction and access!
What a wonderful tour, thanks!!

The verdin photo is terrific. For many years the verdin was a nemesis bird. They are a little too far west to be a regular here. We have a really big check mark and date in in Sibley.

Troy and Martha in Ft. Worth

WOW! Amazing post!! I love the little hidden bird. I had never heard of them before. And the squirrel is adorable. I would love to go there and explore.

(I fixed the link on my blog connecting to yours. I was right in the middle of editing the HTML when you stopped by. I kept missing a one little stroke and it was driving me crazy trying to find it. LOL)

Love that Verdin photo! I wonder whatever happened to the Africanized Bee scare? I rember beiing pretty spooked by movies I saw in the 70's about killer bees.We were waiting for doomsday when they would finally make their way up north to where we lived.-Haven't heard about them for years.