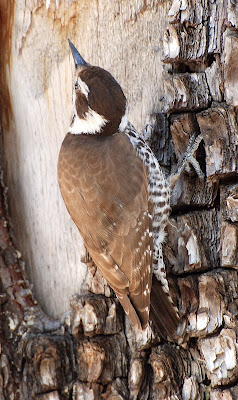 On Thursday, March 27 I picked Kathryn up from the Tucson Airport. While she drove to the Salt Lake City airport in a snow flurry, she arrived to sunshine and 80 degrees here in Tucson. We drove home through the Sonoran Desert, past cactus, mesquite, Palo Verde and acacia. Wildflowers bloomed in profusion painting the roadside a rainbow of colors. Once home she settled her stuff in her room, changed her cloths to suit the weather, and we were off to Madera Canyon.
We parked at the Madera picnic area and started our hike along the creek towards the amphitheater where Jean, my naturalist friend, had told me she had seen Montezuma Quail a couple of days before. It wasn’t long before we found some acorn woodpeckers and Kathryn was adding new species to her life list. While we never found the Montezuma quail, we did find an Arizona woodpecker on a tree near the road.
The Arizona woodpecker is our only brown woodpecker. Its range is mostly in the mountains of Mexico but it extends into the United States here in Arizona 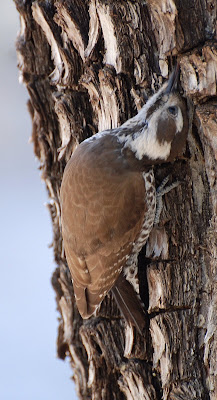 due to the fact that woodpeckers don’t observe international boundaries. Its favored habitat is mountainous oak woods. Similar to the Hairy woodpecker but with a shorter tail, we found this female clinging to the side of a live oak tree chipping away at the bark. It seemed unconcerned with our presence and went about its business of ripping off chunks of bark and examining the underside. I watched amazed at the contortions of its head as it twisted its neck to listen or peer under the bark. Then, it would hammer away at the trunk, stop, reach in with its bill and gobble something up, then start the process all over again. This was only my third time seeing the Arizona woodpecker and certainly the longest and best view I have ever had of it. We watched it work for 15 minutes or more, then finally left it to forage as we continued down the road to our car. 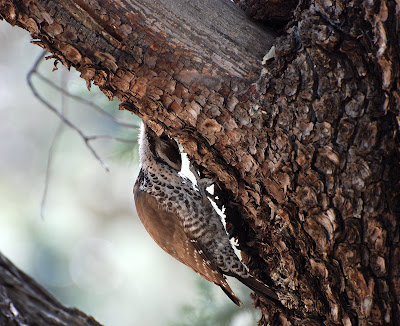 From there we followed the road to the top and then down to the Proctor Trailhead. I have often seen ladder-backed woodpeckers in this area as well as warblers along the creek. Before we even parked our car we saw two canyon towhees hopping about under the trash bin in front of us. We disembarked and headed down the trail through the charred remnants of a fire that happened in this area a couple of years ago. Blackened ocotillo scraped the pale blue skies, charcoal mesquite trees contorted leafless in the fields. A barrel cactus scorched by flames was a spineless ribbed ball sitting on the ground amidst dried grasses that are springing back to life.
Down by the sycamore tree along the creek the yellow-rumped warblers merrily searched the newly sprouted leaves for insects. We searched the treetops for a black-throated gray warbler and finally found him. Then we continued across Proctor Road and up the trail to where it a canyon towhee called from a bush near the creek. I had never wandered up this far before and marveled at the white rock as the water tumbled over it. Over time the water has carved it into such interesting sculptural shapes and it gleamed like white satin in the late afternoon sun. 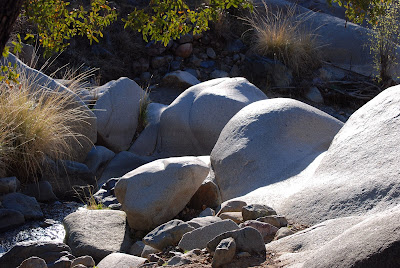 Farther down the trail looped through a wooded meadow and the afternoon was silent. Here the silence and shadows engulfed us in quiet and we walked peacefully along the trail, each lost in her own thoughts. It was almost like you could feel geologic time and I felt the briefness of my life and the ghosts of the past in that place.

Soon we saw motion ahead and I awakened from my reverie to see what was hopping about on the ground. A small flock of pink-sided juncos was searching for food in the undergrowth. We watched them with their dark eyes and pink bills poking among the grass and stones, and then we headed on down the trail and back to the parking lot. We were almost there when the ladder-backed woodpecker showed up. It clung to an ocotillo branch and drummed against its thorny side before flying off to another farther away from the path. It was a good first day of birding with Kathryn adding three woodpeckers, a Mexican jay, and a broad-billed hummingbird to her life list.
Posted by Kathie Brown at 3:58 PM

Hi Kathy...that is one handsome brown woodpecker. The desert has so much beauty! If you have photos of the pink-sided juncos and the others could you please post them for us? Very nice shots, indeed! Thanks for the drive through the desert.

Thanks for the memories. Martha and I birded Madera Canyon and SE Arizona several years ago. We had an absolute marvelous time. We saw a lot of great birds.

Thanks for the nice comments and hope you get to Alaska someday.

I absolutely love Madera Canyon. It's also a great place to see insects, and I usually get at least one black lighting trip in there when I'm dowm for my conference each July. Your description of the post-fire landscape was so vivid. I knew exactly which part of the canyon you were talking about.

I wish I had been along! I could have added several life birds too. The brown woodpecker is beautiful in these good shots you have of him. I too would like to see pix of the pink sided junco.

Very nice pictures! I've never seen an Arizona Woodpecker before. Thanks for sharing!

Aunt B, I regret to say I did not take any photos of the pink-sided juncos that day but I will search my albums and if I can't find a good photo I'll go take a new one and post it just for you!

Troy, thank you for your kind thoughts! I love Madera also and so will be at the Open House this weekend being held by the Forest Service about the Rosemont Mine. They have extended the public comment period until July 11 due to public outcry. You can email comments to comments-southwestern-coronado@fs.fed.us if you are interested.

Doug, will you be coming this year? I'd really like to meet you if you are interested. What's a black lightening trip? I'm glad I could bring Madera to life for you once again.

Brucesc, it would be worth the trip to come here, believe me! I'll try to get a photo of that pink-sided junco for you,Aunt B and everyone else too.

J karl clampit, neither had I until I moved here. Amazing bird to say the least! Thank you!

My paper just got accepted for the conference, so yes, I'll be in AZ this July. If scheduling works out, I'd enjoy meeting you, as well. Perhaps you could join up for a blacklighting experience. Blacklighting is a way of viewing/collecting nocturnal insects, especially moths and beetles. You hang a sheet up and place a black light in front of it. Stuff is attracted to the light and lands on the sheet. A few months back I did a post about black lighting in South America. You can see it here.

Doug, what an awesoem post! I'm glad you added the link. Blacklighting sure looks like a good time. Let me know when your plans are set and we'll see if we can connect.

Cool looking brown woodpecker.-I've never seen an Arizona Woodpecker before.I get that feeling to sometimes that I can feel the "ghosts" from the past.

Larry, I imagine you would. New England is full of ghosts!