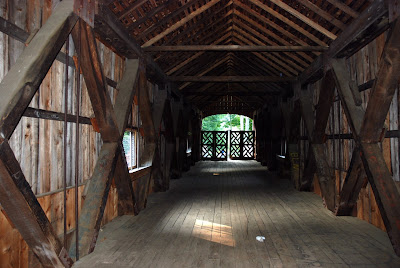 (Today's Photography Courtesy of Kathie with the Nikon D80; 70 to 300mm lens, as always, click on photos to enlarge for best viewing.)
Comstock Covered Bridge is located on Rt. 16 just west of Colchester center. Built in 1791, it spans the Salmon River. 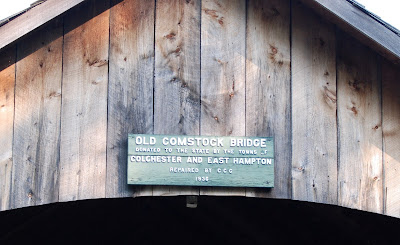 In 1936 it was repaired by the Civilian Conservation Corps. It has been repaired once again recently but whomever did it made a bad job of it. Huge rusted metal beams run along both sides of the bridge to stabilize it. Long metal bolts were then drilled through the wooden beams of the bridge and into the steel girders. Because these girders run the length of the bridge and onto the banks it would be easy for people to climb out on them. The solution? Let's make this once picturesque bridge even uglier by putting wire cages at both ends of the girders! There, that solved that problem. While no one can hurt themselves now, neither will anyone want to photograph this bridge except to show everyone else how the job was botched! 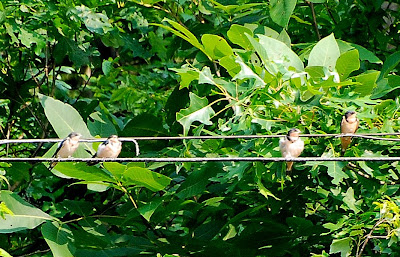 This flock of barn swallows doesn't seem to mind one bit. They are having as much fun watching me as I am having watching them. The swallows are sitting on wires across the street from the bridge. It is in these same trees where I saw the American Redstarts. 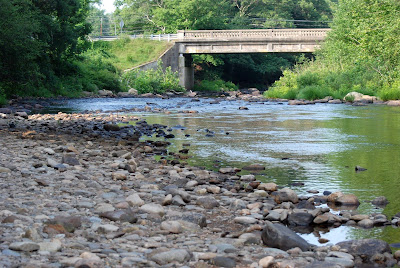 The Salmon River flowing beneath Rt. 16. On the other side of this bridge and across from the Comstock Covered Bridge is Salmon River State Park. (Click on the links to see pictures of the bridge prior to the steel girders being added. This is the way I remember it.) As a child I knew it as a fun place to swim as well as a place where my Grandfather went fishing. Now I am exploring these old haunts as new places to bird. For today I will keep to this side of the river. 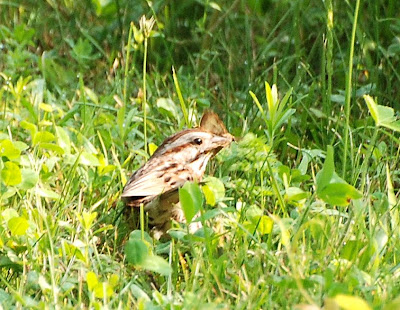 A song sparrow catches a moth in the grass near the bridge. 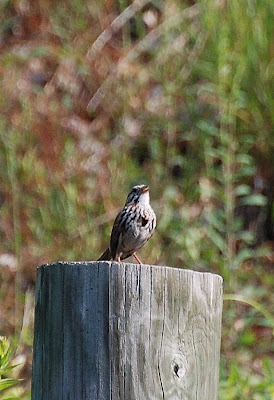 Then it hops up on a fence post to sing about its breakfast! 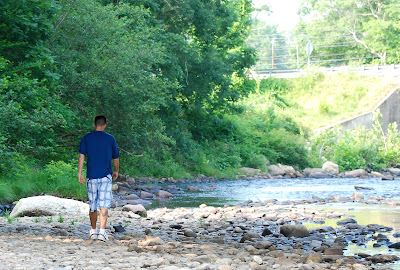 My son, Alex walks along the rivers edge. 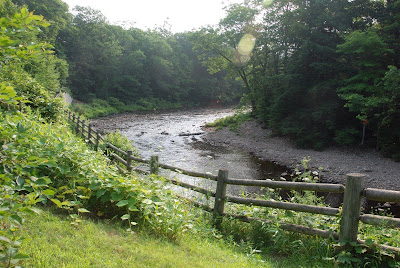 We cross the wooden bridge and head around this bend of the river. 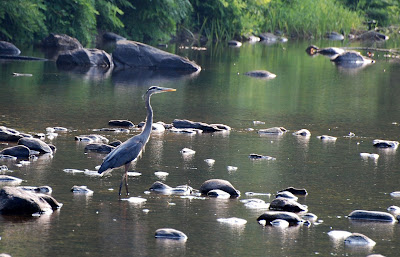 A great blue heron flies in and lands among the rocks... 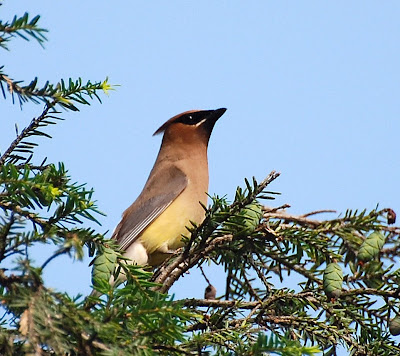 ...but I am distracted by the sounds of Cedar Waxwings in the trees overhead. I observe them hunting insects over the water in a flock. I have never witnessed this behavior before. It is new to me. I thought they only ate berries, but these birds are acting like flycatchers flying out from the trees, grabbing an insect and then returning to their perches. 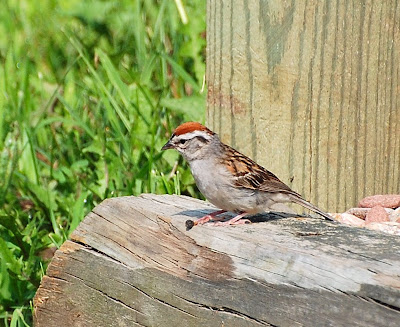 This little chipping sparrow bids us good-bye as we head back home to Gramma's house. 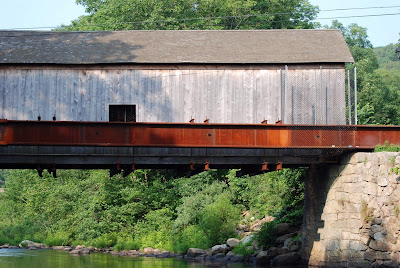 View of the bridge with the steel girders running along side. Notice the chain link fence at the end near the bank.

Nice birding adventure Kathie. I agree with you about the chain link. Some things should just be left a little dangerous. Pappy

I think they screwed up that covered bridge royally. We got covered bridges around here with load limits so trucks can see if they can run through them or not. I would never dream that they would allow (whomever "they" might be) something like that to happen to a historical bridge. Mercy. What an ugly mess.

What a beautiful area, and great pictures of our north-eastern birds.

a wonderful post. The bridge photo is lovely. And I do love the blue heron.

Too bad about the bridge. What were they thinking?

Interesting bird walk. I liked the part about the Cedar Waxwings. The only time we see them is in the winter when they eat berries in our back yard.


Did you get my e-mail for your upcoming Carnival.
It's a fun post about Snow Geese and a little about their behavior.
To see the post, Click here.
Troy and Martha

Reply via my e-mail:

Hi kathie I am just back catching up on your blog..loved the waxwing...I have never seen a covered bridge, the river picture with your son is a beauty...such an interesting post....cheers

All your photos were lovely today!

Great blog. My first visit. Am wondering if you know of a good travel site for birders? We have eco-friendly vacation homes that many birders like to rent and we'd like to do the same when we travel, but can't find any!

Way to go! 14 birds and a gorgeous bridge: that's my kind of day!

I like the 1st photo of the bridge, but see what you mean at the end. The Heron photo is great. The light on the rocks is so unusual.

I'm looking at this photo thinking-Hey! Look at that-Kathie's got a covered bridge in Arizona that looks just like Comstock Covered Bridge! -OOps-that is Comstock Bridge. Awesome photos-especially the waxwing!