My World: Maine in Green and Gray 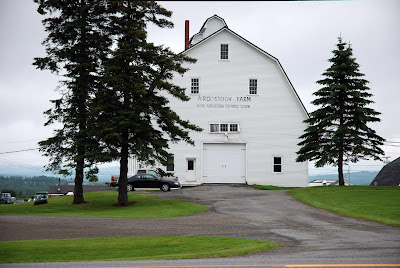 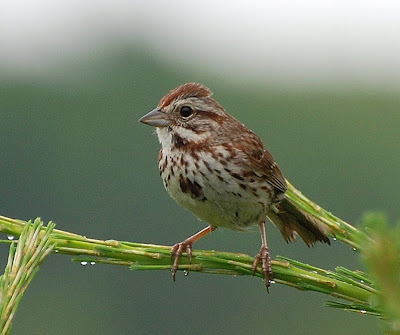 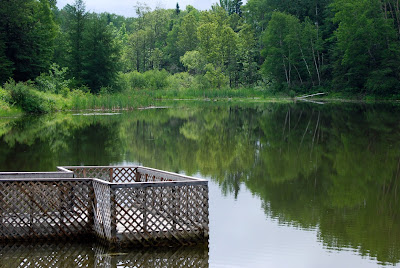 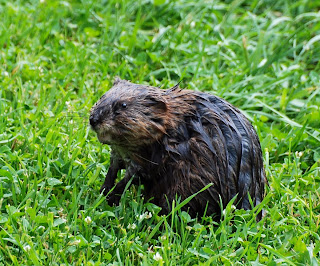 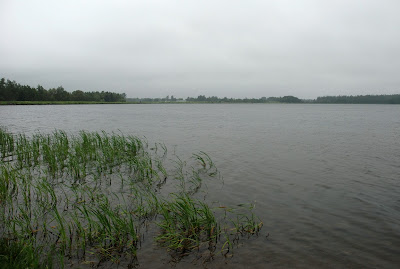 ( I saw two loons in the water here.) 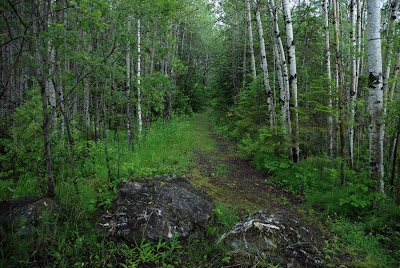 (It is down this path that I found the magnolia warbler) 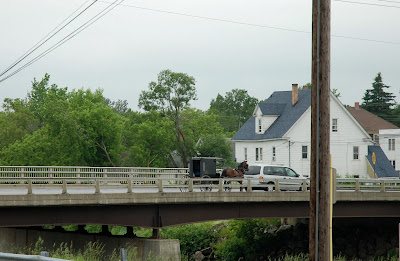 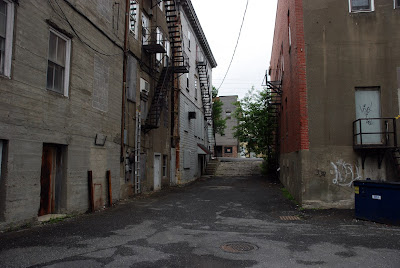 Presque Isle alley 6-27-09
( I counted a couple of chickadees in the tree down this alley.
Birds are everywhere!) 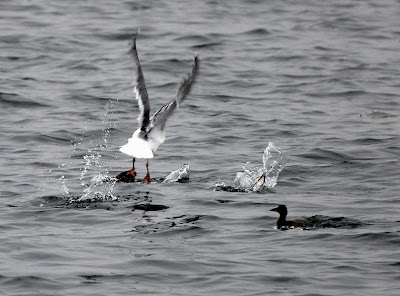 Seagull and unknown birds in the harbour 6-29-09 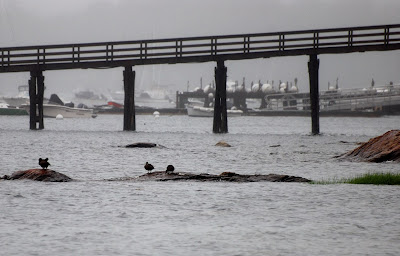 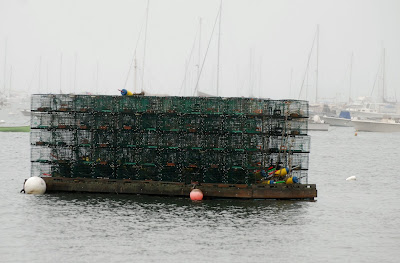 Lobster cages stacked in the harbour 6-29-09 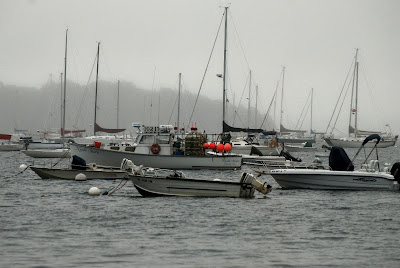 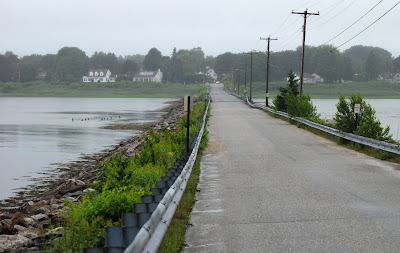 Laughing gull in gray sky (he's the only one laughing!)
In June I took a trip to the east coast where I visited Connecticut and Maine. Together my mother and I took a drive up to Aroostook County, ME where my second son lives with two of my grandchildren. Though normally gorgeously sunny and blue and green this time of year, the skies remained leaden and gray the whole weekend. Trees dripped rain drops constantly and the wet grass soaked though my shoes. Still, every morning before everyone else got up I was out the door looking for birds.

Aroostook County is the largest and least populated county in Maine. It is best known for its potatoes and lumber mills. Vast tracks of land are owned by the lumber companies and thus are undeveloped. The many small towns are influenced by their french speaking Canadian neighbors and up along the border in Fort Kent the local fast food chains have the menu in both English and French. When I lived here in the late 90's one could easily cross the border into Canada and back, but now all of that has changed. The people of Aroostook County have a strong sense of place and their identity is strongly tied to being from "The County." When I lived there I met people who have never even been to Bangor, ME, which is the largest town to the south. It takes about 3 hours to get from Bangor to Presque Isle. When you leave Bangor it feels like you have just left the edge of the known world. From there on out it is all trees, rivers, swamps, mountains and rolling hills. Near Millinocket one can see Mt. Katahdin, the highest mountain in Maine.

On our way home from Aroostook County my mother and I stopped in Falmouth to visit a cousin. Early Monday morning I was out the door once again looking at birds. The constant rain has turned the land lush green under gray and foggy skies and thus I decided to name this post, Maine in Green and Gray. (If anyone thinks they know what the bird in the water is, please feel free to make a guess in the comments!)
and that's...
MY WORLD Tuesday
Posted by Kathie Brown at 11:49 AM

I enjoyed my tour of Maine Kathie. Beautiful part of your World.

This Is My Blog - fishing guy said...

Kathy: What a neat set of captures from Maine. Certainly a neat place to vacation when you are from Arizona.
BTW: I have photos of a two Great Blue Herons, a Seagull, a family of Mallard ducks and saw Crows chasing an Osprey.

I live on the seacoast of NH and have never been that far north into Maine before. My brother used to go up to Presque Isle in the winter with his friends to go snowmobiling. We always said he was going to God's country. lol!

I can hardly believe you lived up there and moved to Arizona! Talk about culture shock! Or should I say climate shock!

Great Photos..Looks like you took full advantage of your visit..You really saw and did allot.
wish I could help with the bird Id..

Beautiful photos. Your close-ups always amaze me. But the first one in this post is the one that really gets me. I can't even explain exactly what it is, but it has a mood and I love it.

I really like the 2nd and 3rd one plus the ones of the seagulls on the water. Thanks for the tour, it's really nice and informative.

My world is here

Aaahhh. More of your lovely photos.

You have an eye for capturing such beauty in the images Kathie.

So many lobster pots. No wonder the poor devils don't stand a chance!

I love the atmosphere you captured. The color behind the song sparrow is just amazing.

Thanks for these, Kathie!

I miss Maine. Though I think it clouded up while I was there nearly 2 months ago and hasn't cleared up yet.

What a wonderful place for you to stay at and so different from your normal habitat. I am so glad you had such a great time there. I siss the call of the Loon at twilight, so well remembered from our glorious autumn in Vermont yrars ago.

These are beautiful pictures--how did you manage to make this gray and dismal summer look so lovely? I'm sorry to have missed you this year on your trip to Maine--maybe next year we can get together. Your pictures are always absolutely incredible. Love your blog!

Wow, what a grand tour that was, I can practically taste the salt air! Wonderful to get to see places I wouldn't get to myself through your lens and words!

Even though it was grey, you got some interesting images Kathie.

I think you definitely made the best of the bad weather Kathie.
As for the little black aquatic bird I would have to think Murre spp. or Guillemot spp.?? Tough angle and light. Great photos as always.

Beautiful photos and a fantastic tour (the muscrat photo made me smile...so wet and cute!).

That brings back memories.I had several fishing trips in Aroostook County.We stayed in fishing camps at several of the fish river chain of Lakes in that area.I have so many stories to tell about the people and experiences we had up there but I'd be hesitant to share some of them on my blog.