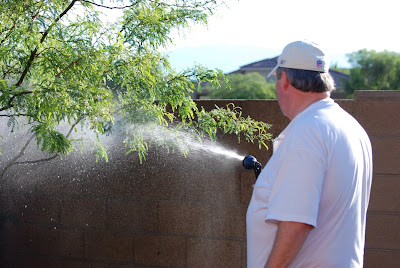 It is Saturday morning and we are up early. We've eaten our breakfast and packed the car. I am excited because we are heading down to Rio Rico before the temperature rises for the day. I give one quick glance out the back door as I lock it when I stop in my tracks and exclaim out loud, "oh NO!"
Outside I see some kind of insect buzzing all around my mesquite tree. At first I fear it is bees and I will have to take my hummingbird feeders in again, but then I notice that something is dropping like snowflakes to the ground. I unlock the door and slide it open. I step out into the blinding eastern sun. My jaw goes slack with disbelief as I see hundreds of beetles on my tree devouring leaves that float softly to the ground.

Gus joins me outside and grabs the hose. he starts to blast the insects off the tree. they cling tenaciously. Those that fall quickly climb the block wall. I scurry inside as fast as a bug and grab my gloves and a bucket. I fill the bucket with steaming hot water and vinegar. With gloved hands and a trowel I start flicking insects into the bucket. I will defend my tree at all costs.
Last year when this happened I did not know what what happening. That time the beetles ate the leaves off my tree also. Someone had commented the insects might be blister beetles and that they secret a toxin that can irritate the skin. Although these insects are differently colored, they act the same, so I am taking no chances. I do not touch them without gloves. However, It wasn't long before I run back inside for my hat! 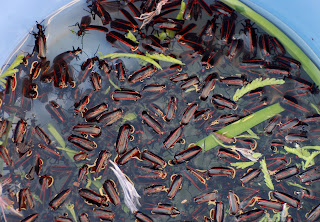 Gus keeps on spraying away but it isn't doing much good, so, although it is only 7:15 he takes off for Ace Hardware to see if he can find something more effective than water to save our tree. Meanwhile, I keep on plucking away, depositing beetles in the hot water solution. One by one I pick them off and plop them into their doom. Soemtyimes the beetles start to crwal up my legs. Yuk! I feel like my skin is crawling but I keep on plucking. I have worked to hard to get this tree to this point. It is grwong so nicely and providing us with shade and privacy. I do not want to loose it now!
This is the first bucket I filled with beetles. I flush these down the toilet and refill the bucket again. Gus calls to say the store is not open yet, so he drives into to town to try someplace else, but this early on a Saturday none of the stores are open. He heads back home to our local Ace Hardware instead, which is open by the time he gets back.

The insects tried to hide behind the new cherry berry pyracantha I planted but I sprayed them out of there. Slowly their numbers diminished. I even see some flying off. Then, a bigger bug flies in. I do not hate all bugs. 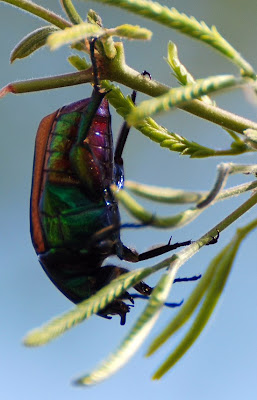 This beauty is an Arizona June bug. Much more colorful than the ugly brown ones I grew up with in Connecticut. However, it still freaked me out as it buzzed around. I did not want it to land in my hair! After it landed on the tree I stepped outside to photograph it. Just look at the rainbow of colors it has! 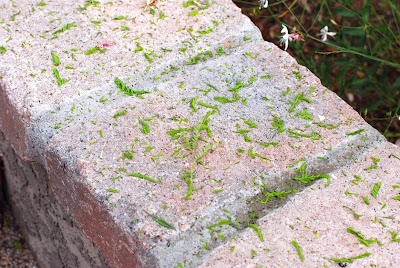 Here you see the damage done by these Striped Blister Beetles. 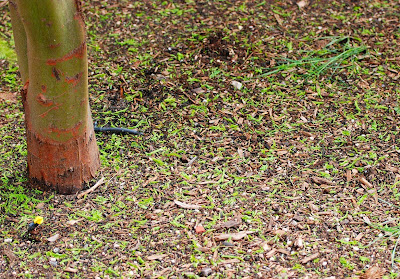 The yard beneath the Velvet Mesquite tree is littered with the new green leaves they cut off. I researched the insects on the Internet and from what I could discern they may be Striped Blister beetles, the most poisonous of all the blister beetles. Though their larva are beneficial because they eat grasshopper eggs, if these beetles get into alfalfa and are eaten by horses they can cause severe colic, diarrhea and even death. Apparently they swarm like this when they are mating. Well, far be it for me to interrupt anyone's reproductive cycle, but if that ritual involves destruction of my tree, well, you have a battle on your hands! Go mate and feast someplace else you bugs you!
Gus did come home with an insecticide that the salesperson told him was environmentally safe, but with further reading of the package label it said to wear gloves and that it was toxic to birds. Needless to say, we did NOT apply it to our trees! We will be returning it to the store and I may try the organic oil that Nature Girl suggested last year when this happened. Though, if this follows last year's pattern, they are probably gone until the next orgy.
We are not going to Rio Rico after all. By the time Gus came back and the crisis was over it was already too hot. We are staying home and our son is on his way down with our grandson, whom I have not seen since before I left for Connecticut. We will seek refuge from the heat in our air conditioned house. Typically it is at least 5 degrees cooler here in Sycamore Canyon than it is in Tucson and 10 to 15 degrees cooler than the Phoenix area. The birds in Rio Rico will have to wait for another day.
If anyone has any more insight about these insects or has a different interpretation of what species they are, feel free to tell me in the comments section! I am still not sure!
Posted by Kathie Brown at 11:02 AM

What a battle! I hope your tree has been saved.

Yuck! I hope you are able to save that beautiful tree.

My brother-in-law rolled over on a blister beetle in his blankets while visiting the southwest. The enormous blisters on his back,shoulders and stomach made him terribly miserable. Hope you can save your tree!

Well Kathie, I have to say that I wondered at first what was going to surprise you on a Saturday morning {:)

What horrible things, nearly as bad as the locust.

Wow, what a mess. Glad you hadn't left yet or you might have returned to a striped tree. I sure hope it's over.

A lioness when roused is a frmidable defender of her young(tree) and a definite force to be reconed with! Thank God you were shown the problem before you left or there may not have been anything left at all. You did put up a grand fight though, I wish I could have seen you in action, I could have helped and between us I'm sure we would also have found plenty to laugh about in the situation. Hope you had a grand time with your grandson.

What a thrilling edge-of-your seat post (and I am NOT kidding when I say this!) And what a valiant battle you put up for your tree; I hope it survives.

Oh my goodness..attack of the bugs!
I hope you saved your tree..there must be someone out here in bloggerland that can help you with the beetle problem.

How awful! I hope you win the fight to save your tree.

You are correct that these are blister beeltes, however they are not striped blister beetles (Epicauta vittata). That's an eastern species. Instead you have Pyrota akhurstiana. It's interesting that this is a completely different species from what was attacking your tree last year, which I'm now pretty sure was Epicauta pardalis. I doubt that either species will completely defoliate the tree, though the attack is certainly alarming while it's going on. Their immature stages are actually somewhat beneficial, as they prey on other insect pestss.

bobbie and Beth, Yes, I saved the tree!

Lynne, no, I did not touch those beetles! They secreted a yellow substance when I touched them with the trowel. I had gloves on the whole time!

Roy, around here you never know!

Gaelyn, I sure hope it's over also! I saw a few more later that night but none since.

Arija, I would have been glad of your help and the proposed laughter! My grandson was so much fun and he has gotten so much taller while I was gone!

Deborah, the tree did survive and I just about picked everyone of those d*** bugs off by hand!

Dawn, bloggers are the best and yes, they have come to my aid before. There was not much to be done in this case, for I refuse to use poison in this yard.

Doug, I was hoping you would chime in! Thanks for the info. I actually had to look up my old post from last year to re-read what you said. I may try Nature Girl's home remedy. We will see what happens.

Good grief, that was quite an attack! I've never seen anything like that. Glad you were able to save your tree without using poison.

Oh my goodness; how awful to wake up to that sight! That is just amazing. that is a lot of beetles.