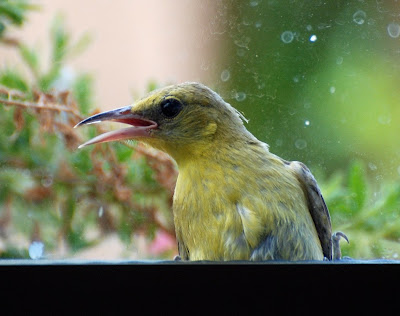 Immature Female Hooded oriole 7-15-09
The summer heat we were suppose to have in June has finally arrived in July. With temperatures running about 10 degrees above normal we hit 107 yesterday and we are on our way to 108 or better today. Right now at 11:00 a.m. MST here in Sycamore Canyon it is already 100 degrees F. In spite of the heat, the birds are still coming to my feeders and seeking shade anywhere they can find it. This little female oriole surprised me by landing on the window over my kitchen sink last week in the middle of the afternoon. She acted like she wanted to come inside out of the heat of the day. As you can see, she is panting, as are all the birds around here latley. I decided she was an immature female hooded oriole based on the fact that she has a thin curved bill with a pale lower mandible. 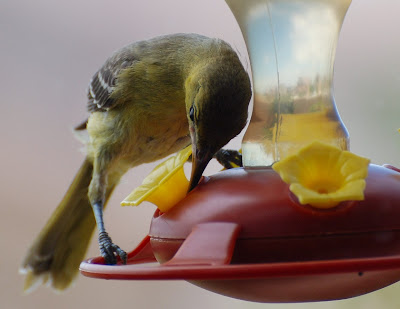 Female hooded oriole trying to get at nectar 7-15-09
I also think it is a hooded oriole because of its slender build, more extensive yellow on the body and not as bright of color as a female Bullock's would be. 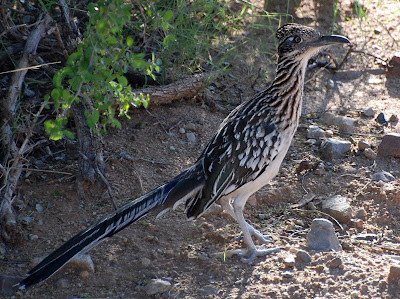 Roadrunner in Sycamore Canyon 7-14-09
Apparently the summer heat has brought out the roadrunners. I saw this fine bird early on Tuesday morning when I went out to count birds on Harrison Rd. When I first moved here to Sycamore Canyon I would see roadrunners on a regular basis up by my house, which is further up the canyon, but I have not seen one there in well over a year, so I was quite please to even find this one down here. Later on that afternoon as I was shutting the blinds to help keep the house cool a roadrunner suddenly appeared right by my back patio door! I stood there astonished at first, then went to grab the camera, but the bird was too fast for me and all the other blinds were shut, so I was unable to get a shot of it in my yard. Then, this morning when I went to fill the feeders outside the den window I was startled by a roadrunner that was hiding under the front yard bushes. So, I'm pleased to report that roadrunners are still present here in Sycamore Canyon after all. 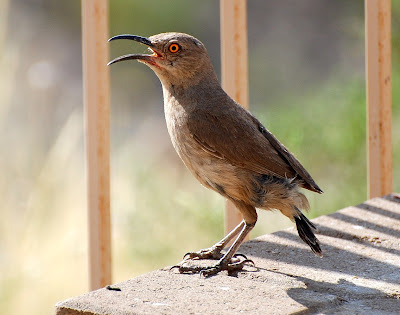 Pitiful curved-billed thrasher 7-7-09
Right after I returned from Connecticut this pitiful looking curve-billed thrasher showed up at my feeders without its tail feathers! I don't know whether it was just molting or whether a coyote or some other animal had grabbed it by the tail as it flew away, I only know it made a comical sight. The poor thing looks so out of balance without its tail, but I am happy to report that I have seen it numerous times since I took this shot and the tail is gradually growing longer! 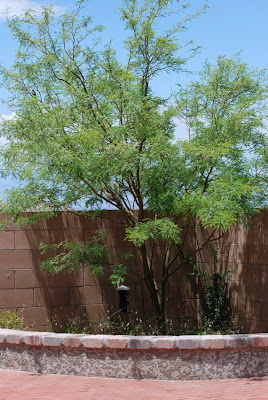 Our Mesquite tree 7-14-09
On a final note, the mesquite tree survived the insect attack of a week ago. It continues to grow and provide shade for us and shelter for the birds. The velvet mesquite tree is the native species here in the Sonoran desert and the birds just love it. With a steady supply of water, this tree should grow quite large and shade the whole back yard one day. Thank you all of you who commented on last week's post and have since inquired into its health. We finally made it down to Rio Rico on Friday where the birds and the bugs are plentiful in spite of the heat!
(Click on any photo to enlarge for the bestview)
Temperature Update: 12:45 PM/103 degrees F.
Weather Update 7-20-09: Tucson broke a record yesterday when the temp reached 109 degrees F. Then some storms rolled through and it dropped 20 degrees in less than an hour. Up here in Sycamore Canyon the hottest I saw was 105. We're in for more of the same all week long!
Posted by Kathie Brown at 10:58 AM

Wow, I won't moan about our heat anymore Kathie. You took some great photos, enjoyed your post as always.

I am in VT enjoying the cool weather..will be back home in FL sweating in a few days.

The immature female Hooded Oriole is gorgeous. I love her long bill. I've never seen a Roadrunner. I love his looks! It must be so much fun spotting one. Wow...103 is hot! We are experiencing a cool front. Yesterday I had to wear long pants and a long-sleeved shirt!

Denise, it wouldn't be so bad, but the humidity is up due to the monsoon, which makes it worse.

Carol, maybe you should stay in VT a bit longer!

Kelly, she is a cute bird, isn't she. I had fun photographing her. Even the thought of wearing long pants right about now is enough to make me sweat!

Nice picture of Roadrunner.
I have seen that bird only in cartoon network.

Yikes! HoT! Glad your tree survived and the Curve bills tail feathers are growing in!
Will keep in touch for a Arizona Bird outing ..maybe jan or feb..

I don't think I could take that kind of heat.

We had one of those domed bird feeders that I didn't take down in time before a finch (I think) built her nest there. It was in direct sunlight. I watched mama bird panting heavily each day and finally couldn't stand it. Put up another hook 3 feet to the side and in the shade. While she was off the nest, I moved the feeder. And then worried and fretted she wouldn't go to the nest. She did! I never saw her "pant" again!

Thanks for the update on the mesquite; it certainly looks good in the photo - your ordeal paid off! The birds look at bit out of sorts with the heat, though. Must be tough doing any decent panting when you're a bird. Dogs have the market cornered on that one!

Phew! That is warm, wish we could share some of your heat! I am glad to hear that your sad little thrasher is OK, maybe he had a close escape from a hawk?!