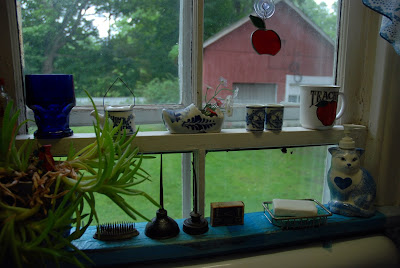 Every year when I return home to Colchester I stay with my mother in the house she grew up in. I know it as Nana and Grandpa's House, but it has been my mother's since 1999. As is typical in many New England homes, not much as changed since I was a child. The kitchen still has the old cast iron farm sink and the cupboards are still painted in the same colors as when my Nana was alive. I don't know when it started, but it became my ritual to go to this window first thing in the morning and at various times throughout the day to look at the sky and check on the weather and read the old thermometer that hung outside on the glass. Living in New England is all about the weather and somehow that old thermometer gave me a sense of comfort to look and see that the temperature was as good or as bad as I suspected. So, imagine my chagrin when I arrived this year and walked to the window and the thermometer wasn't there! Apparently it had been removed last year when the storm windows were taken down to be repainted. No one had bothered to put it back up again.
For me, I felt lost without it. I could not believe what a ritual checking the thermometer had become, and though I knew it wasn't there any longer, the whole time I was at my mother's house I still kept walking to the window to check on the weather. I hope she puts a new one up before I come back next year. I don't think I could take feeling this lost again!

that is a lovely picture.

Isn't it amazing, how we do become entrenched in certain routines? I'm all about the weather too. My kids laugh at me. But it makes such a huge difference in how I feel each day.

I like all the stuff in Nana's window. Maybe you should have offered to rehang the thermometer. Or send her a new one. It is funny how we follow patterns.

Such a heart-warming story and delightful photo! I so get where you are ocming from, worse than being without your watch! Thoroughly charming post!!

This interior space told me right away you were not out west but home. Such a beautiful image to me. Checking the thermometer...I do it all the time.

Thanks for the reminder of this regionalism. Delightful!

I love to see the scenes outside the window, nice colors....Happy Sky Watch and have a great weekend

...beautiful. I love that everything has stayed the same in the kitchen. It's gorgeous. I guess you'll have to come eqipped with a screwdriver to hang one up if need be next year! I'm a weather checker too...

what a lovely post...i like the view from the window. it is amazing how we attach ourselves to certain things when we go home. hope you had a chance to put the thermometer back up before you left.have a lovely weekend.

Great post! Brings back memories of my Granny and Pop-Pop's house and reading the HUGE thermometer on the oak tree in the yard.

Oh..what a great window..with such interesting things in it..
oh..that thermometer must go back...
hope it returns to its home soon!
Nice post!

Yes, it's harder to let go of memories the longer they've had to take root in our soul.

By the way, I was correct - My dad is loving the prickly pear jelly. I showed him your posts about gathering the fruit and making the jelly and he was fascinated by the whole process. My mom said it reminder her of how much work it all was. :)

I'm laughing! Here I am in New England, and I look out at my thermometer first thing in the morning, right after I look at the sky.

You need to get one for your window at home, Kathie.

I know that feeling which you describe so well of "place". Maybe you could find a thermometer which closely matches the one that is gone and send it to her. Then it would be there when you came to visit again!

Interesting how routines become so ingrained and are so missed when they are no longer available. Nice shot.

Such a pretty window and view. I'm sure I would have headed somewhere to buy a new thermometer! If I were that used to it, I'd make myself crazy until I had another.

A window full of memories. A memory that is close to your heart!
Thank you Kathie for sharing.
Hugs NG