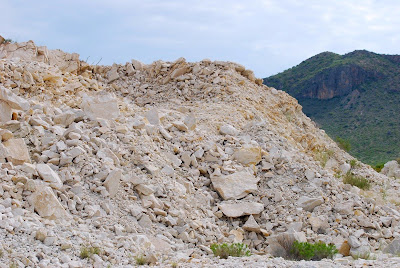 Limestone heap in Davidson Canyon
with the Empire Mountains behind. 8-13-09
The battle for Davidson Canyon heated up today as The Empire-Fagan Coalition announced a multi-pronged response to cement and mining giant Arizona California Portland Cement Company (CalPortland), as the company moved forward with plans to mine calcium carbonate in two open-pit quarries spanning Davidson Canyon.

Earlier this week, CalPortland made a formal application to the Army Corps of Engineers, to be allowed to build a mining haul road across the canyon, which runs along Scenic Highway 83. Davidson Canyon, parts of which were recently designated an "Outstanding Water of Arizona", is a major tributary to Las Cienegas Preserve, and a critical link in a watershed that supplies the Tucson Basin with up to 20% of its recharge.

Home to protected species, perennial above-ground springs, and an essential wildlife corridor, the Canyon's vital place in the Sonoran Desert ecosystem is unquestioned. Furthermore, archeological discoveries of objects considered sacred to indigenous groups are located within a stone's throw from the proposed pits.

The Army Corps of Engineers has opened the public debate for a 30-day comment period, and the emails faxes and letters are flying. Mike Carson, president of the Empire Fagan Coalition, estimates that before the comment period ends, the Corps will hear from over 40 governmental and conservation organizations, hundreds of residents, and the Coalition itself. "Yes, we are outgunned - if you are talking about high-priced lobbyists and unlimited spin budgets," said Carson, "but ultimately the will of a community prevails, and I predict that September will see CalPortland slinking home with its multinational tail between its greedy legs." Just to be sure, the Coalition has organized a public Town Hall event for Wednesday August 26th, to get out the word. "The clock is ticking, and the legislative and regulatory environment is stacked against us, to say the least," said Carson. "But the main criterion that the Corps of Engineers uses to evaluate this 404 application is that of the public interest. If you define the public as a few executives in Los Angeles, they might prevail. But we are keeping our fingers crossed and mobilizing all the help we can get."

Please Save my home! 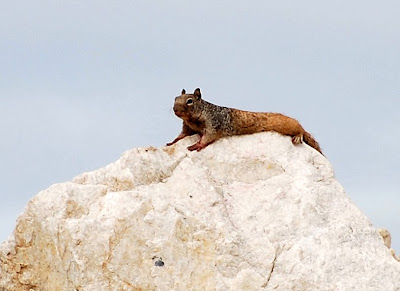 (This article is a press release from the Empire-Fagan coalition. These photos were taken by Kathiebirds on a visit to the canyon and Andrada Ranch last summer. )
Posted by Kathie Brown at 9:36 PM

This is so like those mining companies, if allowed your canyon will look just like a coal mining site. I know you are beating your head against a brick wall, but I pray for a miracle.

What a bunch of greedy bastard to want to ruin a perfectly good place by mining a little rock. I'm sure you're fighting this.

Hope the voice of the people is heard!

Hope they are successful in stopping this. Isn't he cute! Always like seeing another species of squirrel. Very red looking.