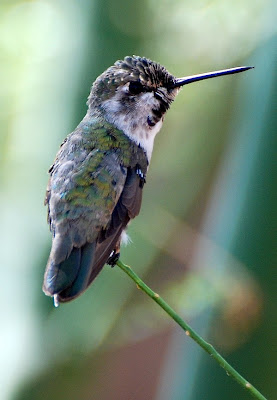 Costa's hummingbird immature male 8-10-09
In My World it is the season of hummingbirds. While the rest of the country enjoys hummingbirds in the heat of the summer, for me they arrive in August and stay all winter long. 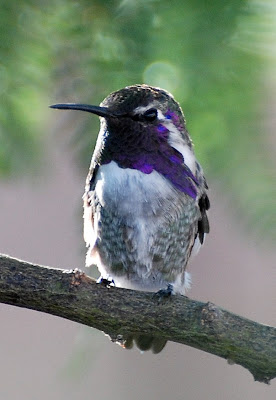 Male Costa's 8-9-09
Though I have seen a few Costa’s females during June and July, it is only recently that the males started to show up again. 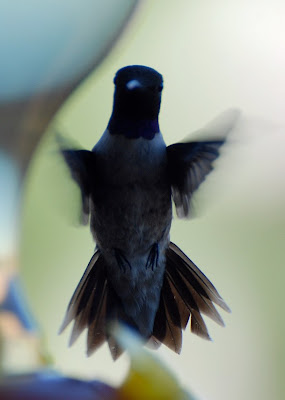 Black-chinned male 8-10-09
Then, on Saturday I saw my first black-chinned male of the season. By Sunday the flood gates had opened and theses tiny feathered jewels are here in force. I now have two rufous hummingbirds battling for my feeders along with at least 2 black-chins and numerous Costa’s hummingbirds. I have already seen some Anna’s and soon the broad-billed hummingbirds will arrive. My back yard has become a war zone with these feathered weapons flying about. They use their tiny beaks like swords or lances and dive at each other to defend whichever feeder they have claimed as their own. 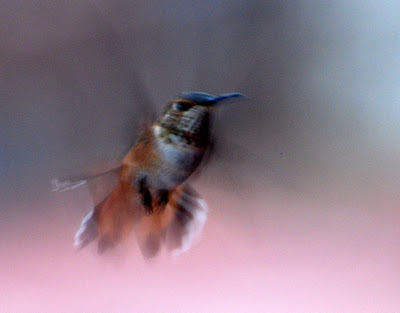 Fiery rufous 8-10-09
Of all the hummingbirds in the yard the rufous hummingbirds are the most fiery. If they are at a feeder and an intruder tries to feed, they hover in the air, orange tail feathers spread and buzz and chirp and dive until they drive the intruder away. 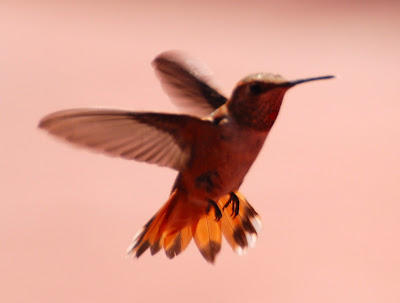 Rufous Hummingbird 8-10-09
Unafraid, the hummingbirds will whizz past my head like a shot, and I will flinch before they will. It makes it hard to get anything done, for they are so fascinating to watch. I tried not to love them just because everyone else does. I am a bit of an oppositional child in this way, but I could not resist. They have won me over and I am in love with them. 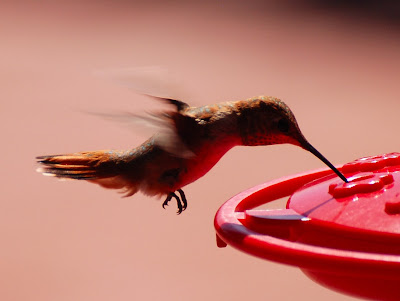 Rufous immature 8-10-09
I will only have this wide variety of species for a short time. Soon most of them will migrate even farther south, and I will be left with mostly Costa’s and Anna’s hummingbirds. The Costa’s will establish their breeding territories and by January and February they will be nesting once again. 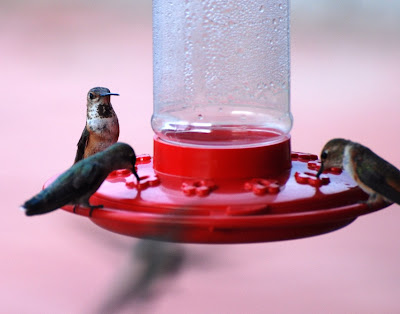 Feeding in harmony 8-10-09
I can easily see how native tribes lived so in tune with the earth that they named the seasons according to what was happening at the moment. For me, the season of the purple martins is about to end, as I know they will soon be migrating south. Now the season of the hummingbirds has arrived and after that, it will be the season of the raptors and waterfowl as those species return from the north. I know I still have so much to learn about my desert home, but as the days pass and I tune in to this wonderful world around me I begin to feel the beating heart of this earth and hear the breath of the land. I begin to know and understand the moods of this land I live on, this earth that I am a part of, this place that gives me Life.
And that's...
MY WORLD Tuesday
Posted by Kathie Brown at 9:27 AM

Brilliant photos Kathie, such beauty in such a small thing.

This is a wonderful post. I so relate to it. The season of Orioles has ended (sadly), but my hummingbirds are escalating. We have a couple of rufous, and they are brutal (and loud)! I laughed when I read you tried to not love them because everyone else did. I did exactly the same. I like being different (contrary), but they won my heart, too, especially the rufous which we have for only a few weeks at best.

I too have fallen in love with the hummers. There are at least 6 at the feeder right now. Which I see needs refilling once again.

You speak so well of being intouch with the earth around you.

Greetings from Virginia where we have just two kinds of hummingbirds at our feeders. But they are so aggressive that only one can come to the feeder at a time. We must have about five birds right now enjoying the feeders and the cleome and zinnia blossoms.

This is what I miss most about Arizona---the cute hummers. Such a treat and you are correct with how the native named the seasons. I would definately call this the moon of the hummmers.

Thank you for sharing some great, great pics.

Delightful post, Kathie. Beautiful photos. Keep them coming all winter please. Our hummers will be leaving and we will miss them so much when they aren't around.

Roy, they are a treasure.

Louise, it seems that the rufous have returned with their offspring for I now have at least 4 of them in my yard! One is a gorgeous adult male, while the others are females or subadults. I'm glad to hear that you can relate to how I feel! You are so right! They are truly rauckus!

Jack and Joann, thanks for your visit. It's nice to see you again. I'm always glad to share my little piece of paradise with former residence as well as others.

Bobbie, if they keep coming in these numbers I will overload my computer with their pics. I sat out there for a couple of hours today reading and taking pictures of them. There were so many! They are so entertaining. It makes my heart well up with joy.

Great photos of the hummers.
Thanks for sharing.

Come visit,
Scroll down to see "My World"

They are truly beautiful creatures.

Hummingbirds are beautiful birds. You have really nice pictures of them, especially the one sitting. For the first time last year I saw hummingbird in real life, it was exciting moment. Anna :)

i wish i can see a hummingbird for real. they look so delicately small but seem quite territorial and assertive. you really took great captures of them. thank u for the interesting post.

Kathie I am so envious yet happy for you. We don't have any Hummingbirds on pur continent. The nearest thing sere is the Eastern Spinebill which is small and sometimes hovers.
Enjoy your whirring little friends.

Wow, what variety! I didn't realize you had then all winter. I just looked in my much worn southwestern field guide to see what kinds we will have in New Mexico. Not quite the same ones as you, but much more than our ruby throated one here.

That costa in the first shot looks like he has attitude.

Oh wow, what a wonderful post and brilliant photos. I never realized that hummingbirds were so feisty.

Kathie, I forgot to ask how is Blossom? And how is Gus' hand? Do hope you're all recovering well.

Troy, thanks for stopping by. You must have been here while I was there!

koala, yes they are!

Anna, the first time I saw a hummingbird it was exciting for me also. I still get amazed by them every time I see them.

marites, glad you enjoyed it.

Arija, no hummingbirds! Oh, I feel sorry for you! You will have to come and visit me in the USA then! We have plenty and oh how fun they are!

fourwindsphotojournal, I hope you enjoy the ones you do have. They all have attitude and they can be down right mean to one another! Still, they are a joy to watch and I am captivated by them.

Denise, Hummingbirds sure are feisty. And, in answer to your second question, Gus and Blossom are both doing fine. I've finally posted an update about them above.

These are delightful images! You sure have a variety of hummingbirds visiting your yard. Almost all of the hummers in my yard look like broad-bills.

These are marvelous! Such motion and they are so crisp. I just love hummers.

So envious! Try and try to attract our one and only hummer - ruby throated as you well know - to NO avail.

Kathie, beautiful photos! You are so lucky to have such an array of hummingbirds. I always love traveling 'out west' because there are so many hummingbirds, and what fierce little creatures they are! Great post :)

Beautiful post Kathie!
I really can sense your attunement with nature and your world around you.
It is nice being able to experience the cycles of nature.