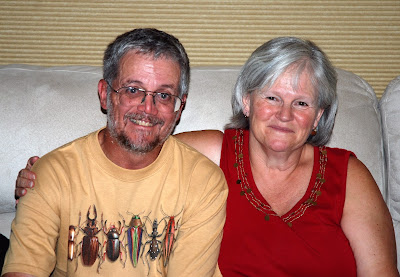 Doug Taron and Kathiesbirds 7-31-09
Doug Taron from Gossamer Tapestry is back in town for the annual insect conference down in Rio Rico. Once again he was able to make time to come and visit me here in Sycamore Canyon. This year we didn't do any black lighting but simply stayed home, relaxed, and chatted. While Gus prepared our famous homemade pizza, I cooked up a couple of pies for dessert. The pizza came out perfect, as did the pies. While Gus and I were grocery shopping earlier in the day I got inspired to make a lemon meringue pie. Then, I thought of banana cream. I couldn't decide which one I wanted more and neither could Gus, so, I made them both. It turns out Doug likes lemon meringue the best. It tasted even better sitting outside on the raised patio looking at the stars and the lights of Tucson while sipping hot tea. I turned on all my outside lights to see if any interesting insects would come in for Doug, but the bugs were a no-show. All we got were a couple of small moths, a few mesquite bugs and those darned brown crickets. 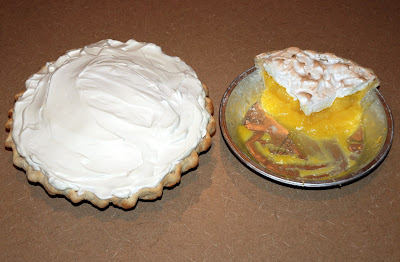 So, guess what we had for lunch on Saturday? Pie anyone?
Having my blog has let me meet friends I would never have run into. We had such a good time. Since Doug is from the Boston area originally he is a Red Sox Fan, which gives him and Gus something to talk about. Me? I am interested in everything. The conversation never lagged. We ran out of time before we ran out of topics. I would have missed out on these photos if Doug hadn't suggested it. I was so lost in our visit I forgot to take pictures! So, the photo above is of just before he left. I photographed the pies the next morning. I sure hope we can do this again next year.
On his drive back to Rio Rico Doug stopped at some Magic Gas Stations. Be sure to read his post to see what I mean.
Posted by Kathie Brown at 12:43 PM

enjoyed the post. If you see Doug again before he leaves, tell him hello.

PS: tell me what you think

The pies look delic. How wonderful to have fellow bloggers stop by.

Hi Kathie, you are feeding that Doug Taron too well.

What a lovely time you had Kathie, meeting up with blogging friends is something I hope to do one day. Yummy looking pies!

Well - yummy to the pie. Since most of the lemon is gone, I'll have a slice of banana, please. Lovely that you could make a connection with a fellow blogger.

It is a very nice way to make friends and to keep them. Beautiful pies!

You both look so very, very happy, is it the company or the yummy pie?

Texas travelers, Doug left Friday night and I did not see him again. Sorry!

Gaelyn it was a pleasure.

Roy, you are probably right!

Denise, I hope you can aslo. Thanks!

Barb, I'd be glad to share my banana cream pie with you!

Sandy, yes it is and thank you!

Arija, I think it is the company most of all. I like "collecting" friends! (And I started doing it long before there ever was a Facebook!")

Oh my..any leftover pie! looks yummy!
I love meeting fellow bloggers! So nice u have been able to do that so many times!

Oh woe is me-Red Sox. I am feeling traumatized after the Red Sox lost games in a row to the rays and yankees.