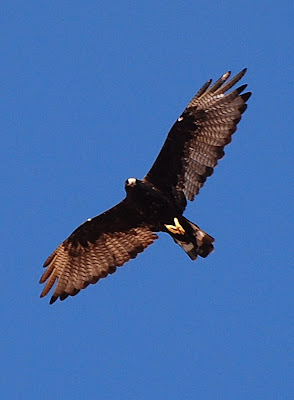 Zone-tailed Hawk 8-1-09 Sahuarita, AZ
Zone-tailed hawks can fool you and their prey by their similarity to turkey vultures. A hawk of the desert southwest, they nest in trees along rivers and canyons but hunt widely over open areas. With a wingspan of 51" this hawk soars with its wings in an open shallow V, just like turkey vultures and is often seen with them. A closer look will reveal the barred wings, feathered head, and the contrast of the yellow beak and feet against the black body. Notice also the white bands in the long tail. 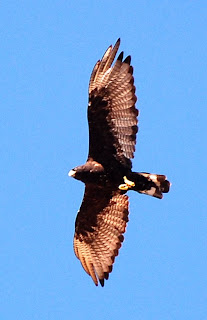 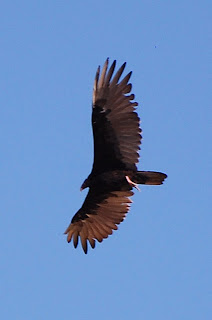 Compare the silhouettes and coloring of these 2 birds. Both were seen just last weekend in Sahuarita and were hunting in the sky at the same time. The one on the left is a zone-tailed hawk. The one on the right is a turkey vulture. 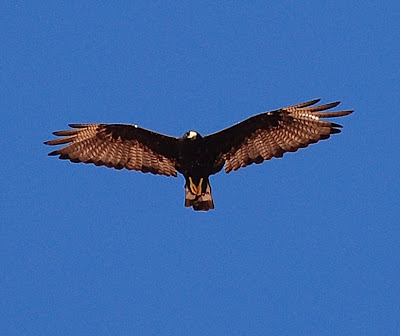 Zone-tailed hawk 8-1-09
Look at these beautiful dark wings and the dark T shape of the body. The turkey vulture below shows the same T shape with translucent flight feathers, but the Zone-tailed hawks feathers are barred, not solid. 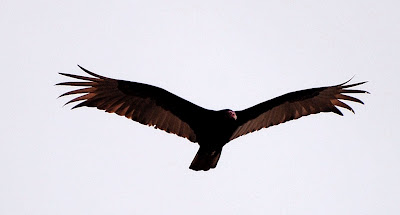 Notice how much longer and and straighter the turkey vulture's wings are. With a wingspan of 67" its "fingers" are of almost equal length, forming a square tip, while the zone-tailed hawk 's fingers are graduated in length, forming a gentle curve. Also, the zone-tailed hawk has 5 fingers while the turkey vulture has 6. I saw my first zone-tailed hawk on July 2 right here in Sycamore Canyon, the day after I returned form Connecticut. It came flying toward my den window and at first I thought it was a turkey vulture, but then it seem to be flying differently. Then I though it might be a raven, but it seemed much larger. as the bird drew closer with deep scoops of its wings I was able to see the white bands in the tail and the feathered head. As my mouth dropped open in astonishment it flew directly at the window and over the house. It was so close I was able to see it with my bare eyes. Knocking myself out of my stupor, I dashed into the living room to grab my camera. I had to hurry and change the lens to the 70-300 mm zoom, since the camera was still packed up from my trip. By the time I got outside with camera and bins, the bird was much higher in the sky. Though I was able to capture some photos the image had to be cropped and enlarged so much that it was not worth posting, though I could still see the barred wings and the white bands in the tail. It was enough to confirm my ID. That makes bird number 78 for Sycamore Canyon!

Great photo. We have to go to SW Texas to see them and they are not very plentiful even then.

This is a great post comparing these two birds. That hawk is handsome but the
TURKEY VULTURE IS GLORIOUS!!!!

Great photos! I have lots of turkey vultures here along the river—including a roost right across the stream from the cottage. No zone-tailed hawks, of course, this being Ohio. But I can certainly see the resemblance in their flight silhouette—though I can also see the differences.

The sky is really beautiful behind your hawk photos. Lovely post.

What a magnificant skywatch contribution! Fantastic-

Thanks for learning this girl something! These are both amazing birds. Grace and power combined--amazing.

What a great post with such awesome pictures! We have tone of turkey vultures here, now I'm wondering if I might not have mistaken a hawk for one....

That's great! Good comparison shot!
Funny that I got a whole bagful of Turkey Vulture shots today. Though your Hawk would be a lifer for me, too!

Thanks for the nice lesson! will need that when I get to Arizona this winter.
Great pics as well!

Hey everyone, thanks for your comments!

Dawn, sorry to tell you, but those hawks will be gone when you get here. They are ony around for the summer. In the winter we get all the northern raptors. Still, there will be plenty of other birds to see.

Awesome! How I wish I can capture a little of these.
Beautiful hawks and skies.

Very nice shots. Next time I go to AZ I will need to look for these as well as Harris Hawks. I have photographed Harris hawks in AZ before but they are on film and I want to go back some time and get some on digital but now I will have another bird to look for.

Wonderful photos, and thanks for the lesson on ID-ing the two birds.

I have to laugh at Lynne's comment. She is such a TV fan! I would be fooled by the similarities. I have never even heard of a Zone-tailed Hawk. Great photos as usual.

Gasp! What splendid photos!! How fortunate of you to be there to capture these amazing shots!

Wonderful! I love seeing the detail of the feathers underneath. They do look a lot like turkey vultures at first glance. Nice to see the differences. I hope you'll check out my interview with bird carver, Sue Kraft.

Great photos! Thanks for sharing!

Very cool sighting of an amazing hawk. From a distance it could be a fooler for a vulture. But up close, no way. Excellent captures.

Well I came here to check out your SkyWatch but I am still trembling from the Blossom story I don't have any words!!!

So graceful in flight and those are brilliant photos.