In my quest to add to my Big January list I have gone out birding every day for the past three days. On Tuesday it was the Green Valley Waste Water Treatment Plant where I added the Ross’s Goose to my life list. Wednesday I tried Aqua Caliente Park again. I went there in pursuit of a Lewis’s Woodpecker which has been reportedly seen there on the Tucson Audubon’s Rare Bird list. I have never seen one, but what a treat that would be. An incongruous mix of colors, the Lewis’ has “oily green feathers” as Kaufman describes in his bird guide, with a red face, a pink belly and a gray collar! It was reported sighted in the palm trees but I searched everyone to no avail. No Lewis’ woodpecker today, which would be a life bird for me. 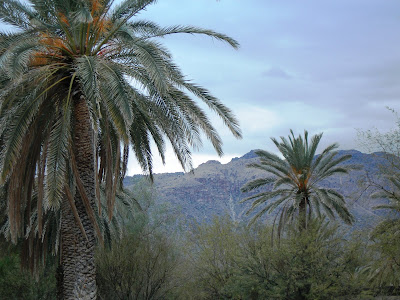 It was afternoon when I arrived under stormy skies. As I got out of my car I saw a Great Egret lifting off on silent wings to fly gracefully away over a distant ridge. Seeing the egret gave me hope that this would be a good day for birding. This time there are few people in the park and I walk around peacefully. The gray light of overcast skies softens the appearance of everything. A light wind rustles the palm fronds with a stronger gust every now and then. Mallards are in abundance, but so are Ring-necked Ducks and American Widgeons. In my grandfather’s old birding book the widgeons are called Bald Pates. I like that name better for it more readily describes that broad white stripe that stretches from their forehead over the top to the back of their necks. It truly looks like the bald head of an old man. In my mind now I think of them as Bald Pates, but I record them by their new names. 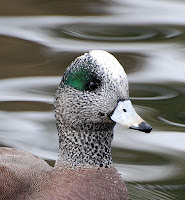 The widgeons make this squeaking sound that carries over the water “Wheet whew! Wheet whew!” which is high pitched and pervasive. The sound follows you everywhere. Mixed with that is the quacking of the mallards and the squeaking laugh-like call of Gila woodpeckers. In short, the park can be a pretty noisy place! I spotted a couple of green-winged teals in the bunch and to my amazement, a Canvasback. Because of the palm trees, Gila woodpeckers are everywhere. I counted 19 before I left, though at times there are far more than that. Northern flickers were well represented with a total count of 6 of the red-shafted variety.
At the north end of the park the trail leads past the lake to the mesquite bosque. Here a more traditional woods like habitat takes over. Tall eucalyptus trees mix with mesquite and cottonwoods. A thick undergrowth of prevails before the mesquite bosque takes over. It’s like three habitats in one area. One only has to stand quietly at this juncture to see Bewick’s wrens, Verdin, curved-billed thrashers, Abert’s towhees, white-crowned sparrows, northern flickers, Gila woodpeckers, mocking birds, and warblers. On a previous visit I have spotted a hermit thrush in this area, along with Ruby-crowned Kinglets and Hutton’s Vireos. Today to my surprise I see a bird I never expected to see in Arizona.
I am watching a flock of white-crowned sparrows in a thick tangle of brush near a big dead tree trunk. The trunk has to be at least three feet around with deep shaggy gray bark. I notice a small bird the color of the bark with a curved bill creeping up the tree trunk. It flies to the bottom, and then starts up the trunk again probing in the crevices for insects. It is a Brown Creeper, of course, but I have only seen them in Maine. I had two there that visited my yard regularly in the winter, so I know what this is as soon as I see it, but I am taken aback. I never expected to see one here!
All the while I am standing here looking at birds the wind has picked up, the temperature has dropped and a brief shower passed by. I am cold and damp but the air smells so fresh and the world feels so alive. Is it possible to have a peaceful wildness? That’s how it feels to me. I could stay for hours if I had a warmer jacket, but the day is waning. Soon it will be dark. I have a 45 minute drive to get home, so I walk back to my car and drive away, but not before stopping at the gate for one last count of Brewer’s Blackbirds and Great–tailed Grackles lined up in hoards on the utility wires. I don’t know why they like to do that in the evening, but they do. I counted 64 Brewer’s Blackbirds and estimated around 75 grackles before I drive off to end my count for the day. I counted 30 species in all, with 6 new ones to add to my January total. I will sleep well tonight.

Kathie, Oh, how I wish I were with you. Instead, I'm stuck in an office for 9 hours a day without windows! LOL!

You should sleep very well tonight! I've had a few days of joy like you experienced. Your January count will be very pleasing to you, I'm sure ;o)

This is lots of fun to read what you are seeing!It sounds like you are having fun birding and trying to add to your January list which is the most important thing.I'm looking forward to a long day of birding tomorrow.