A New Year in the Old West

It’s a new year in the old west but apparently the old ways have not changed completely. I almost laughed when I heard a news report on New Year’s Eve reminding people that they could no longer go outside at midnight and shoot their guns into the air in celebration of the New Year. Apparently this ban just went into affect 7 years ago after a young girl was hit in the head by a bullet fired from 3 miles away! In spite of the warning and the law, two other houses had stray bullets come through the roof this New Year’s day. One bullet grazed the cheek of a small boy as he slept in his bed! I'm not laughing now. This is one old way that needs to fall by the wayside!
The New Year has come in with a roar of rushing wind. It struck about 5 a.m. on New Year’s Day and has been blowing steadily since. Yesterday morning I awoke to Christmas wrapping paper blowing about in my yard and in the wash next to the house. While today would be our normal trash day, it won’t be picked up until tomorrow due to the holiday. Still, people have put their barrels out and garbage is being blown all over the neighborhood and the desert. It’s not a pretty sight!
Fewer and fewer crickets are coming into my house, but they are still here. I thought they would disappear with the cold, but no. Last night I found one in the kitchen sink. I 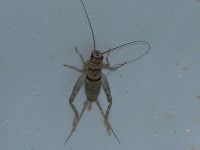 have also found them in the washing machine and the bath tub. I should let the birds into my house! They are doing a good job outside. Yesterday I saw Stumpy, the stub-tailed cactus wren, hunting down insects near my front door as well as in the back yard. The roadrunner was back also, running along the top of the block wall in the back yard. His sharp eyes were constantly on the lookout. He must have seen something tasty in the neighbor's yard for he hopped over the wall and was lost to my sight. Today I have seen the rock wrens numerous times as they search for insects. They bob and hop about the yard, around the gas grill and on the patio searching for dinner. Sometimes they serenade me from the wall or the rooftop with their shrill whistle and musical trill. I have quite a troop of birds here working to keep my yard insect free.
I live on the lands of the old west where cowboys and Indians once roamed. The Native Americans are still here with their reservations and their casinos. In the stores and restaurants you are quite likely to see genuine cowboys in full cowboy get-up, minus the six-shooter of course. We even have people ride through the neighborhood on horseback, and to drive into town we drive through open range with Texas longhorns crossing the street sometimes. I haven’t even bothered to count the number of cattle guards I have to cross to get to and from home. I remember being so impressed by seeing a real cattle guard for the first time when we moved to Idaho 20 years ago. Now I just take them for granted. It’s not something you would see in New England, however. They are just further evidence of the remnants of the Old West.
Posted by Kathie Brown at 1:31 PM

Happy New Year to you and Stumpy the wren too! I've heard that there's still some gun happy folks out that way but it's not funny when people get hurt!

Hey Larry! Nice to hear from you! Gus just got his new Nikon D80 today so hopefully one of us will be able to catch a good picture of Stumpy soon. By the way, Gus is an avid Redsox fan! I showed him your Blog.