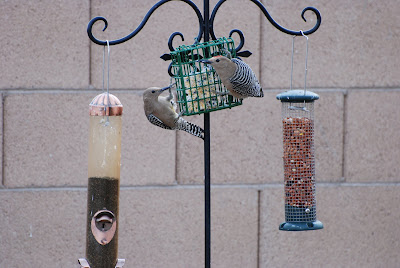 It’s warmer but grayer here today as a storm rolls in. The curved-billed thrasher has become a regular visitor to the suet and seed cakes. This afternoon the Gila woodpeckers were back and I was able to observe an interesting behavior.
There were four Gilas scattered about on the suet and rock wall. While one Gila fed at the suet, two crept along the wall behind. One Gila apparently didn’t want the other on his wall. He puffed himself up like a body builder inflating his muscles. His head went up, his neck puffed out along with his chest, and then he started swinging his head from side to side in a threatening manner as he advanced towards the other Gila woodpecker. When he got too close for comfort, the other Gila flew off! It was amazing behavior to observe. Meanwhile, the other two Gilas were gobbling up the suet and the seed cakes, to they made out just fine.
Then, this evening at dusk I went outside to get one of the hummingbird feeders to clean and change the nectar. As I stepped out the door in the gray light a feathered shadow flew over my head from off my rooftop. Gus and some friends had spotted an owl on the fence around the wash on Christmas Eve, so I knew it had to be the owl. I grabbed my binoculars from inside the house and walked over to the east wall to see if I could spot and identify this owl. I barely got to the wall and was starting to lift my binoculars when the owl landed right on the blocks not 3 feet from me! We both looked at each other startled, then the owl lifted up on silent wings. It hovered there a moment, then flew off to the wash on the north side of the house. I hurried over there and saw it on the ground behind a Palo Verde tree, but by the time I repositioned myself to see past the tree and lift my binoculars, it was gone, along with what was left of the light.
From the flash of a moment when I saw the bird I saw that it had long legs, a speckled coat, round head-no ear tufts, and big eyes. It was larger than a robin, more the size of a flicker but chunkier. It had a short tail. I want to see an elf owl, but this bird was just too large for that. After consulting 3 bird guides and numerous online resources I can only assume it was a burrowing owl. For size, location and habitat, my choices are really limited. I am thrilled that I have an owl living in the wash beyond my house!
Posted by Kathie Brown at 8:09 PM