The Mystery Hawk and the Red Surprise

Tuesday, January 29
My birding day started with watching two ravens chase a red-tailed hawk out of our neighborhood. I am driving down Sycamore Leaf when I see them and I pullover to watch the drama. The ravens are relentless in their pursuit and tag team the hawk, one after the other diving in for the attack. When I reach Sahuarita Rd. I stop, and there on the utility pole is a kestrel. A good day of birding has started.
I am heading for a new location today, a park I found on eBrid called Lakeside Park. It’s much later than I wanted to get out of the house, but at least I am getting out. It is a beautiful day here in Tucson with sunshine and temps already in the 60’s. I have a long-sleeved shirt on over my t-shirt, but I won’t need it for long.
As I pull into the parking lot at Lakeside Park I see a hawk swooping down into an adjacent field. I quickly pull into a spot, grab my binoculars and bolt up the hill. The hawk is on the 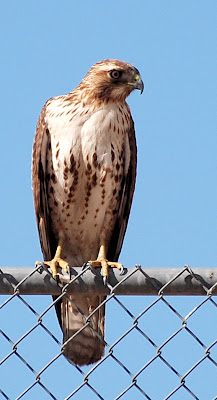 ground doing a Mexican hat dance. He’s trying to stomp on something but whatever it is is quicker than the hawk. The hawk has its wings raised for balance. With the morning sun streaming from behind the bird illuminating every feather it looks almost mythical there backlit by sunlight. I see legs feather to the knees, but no further. The hawk has a white breast streaked with brown. Its tail is long and when it turns there is no red in it, nor are there any “backpack straps” that would indicate a redtail. Through my binoculars the hawk seems huge and I am hoping for a ferruginous hawk, but this one does not have legs feathered to the toes, or the huge gape of the ferrug. No luck there.
The hawk flies up and lands on the chain link fence which surrounds what I now realize is a field next to a school. Ground squirrels are standing up watching this drama, just like me. Now I know why the hawk is hunting here. I walk the short distance back to my vehicle and get the D80 out, which I wisely brought with me this time. I pull my car up next to the fence parallel to the hawk and use it as a blind. After rolling down my window I snap a couple shots off, then decide to see if I can get some shots from outside the car.
I step out and start shooting. The hawk stays. Five step closer, “Snap! Snap! Snap! The hawk stays! I did this several times and was amazed at how close the bird let me get before it took to the air one again. Once home I looked at my pictures and my bird guides and I think it is a juvenile Cooper’s, but I’ve sent off the pictures to some Audubon friends for confirmation. (If you think you know who this hawk is, please leave your suggestions in the comments section below)
Lakeside park in a manmade lake with lots of men sitting around fishing and chewing the fat. It seems there is always at least one guy who looks like Santa Claus in the off season. I walk the perimeter of the lake as the sun beats down on me. Most of the birds I am seeing are what I’ve already seen at other locations, but I did pick up a spotted sandpiper, a pied-billed grebe, and 3 northern rough-winged swallows diving over the water. 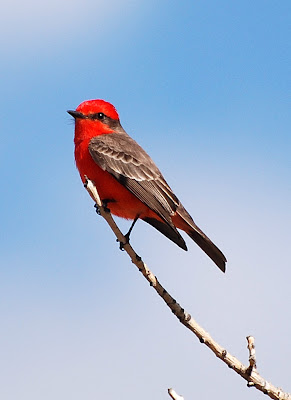 While I am standing on a steep bank looking out over the water a flash of red flies at me and lands on a nearby branch. I cannot believe my eyes, for there is a vermillion flycatcher posing for me. He is so close that I am able to snap off a good picture this time, but I am wishing Gus was here and he could capture this picture.
Just as I am ready to leave I hear a bunch of bird in an old Palo Verde tree near the parking lot. Looking with my binoculars I see a deep hole where a branch was obviously lost recently. Just poking out of the hole are some black and white tail feathers. It looks like the tail of a Gila woodpecker. I can see the ragged edges of the scar, but in the middle the hole is perfectly round. Soon the culprit backs out of the hole and stops to look at me. I now know where a Gila woodpecker nest will be this spring. What a great day! 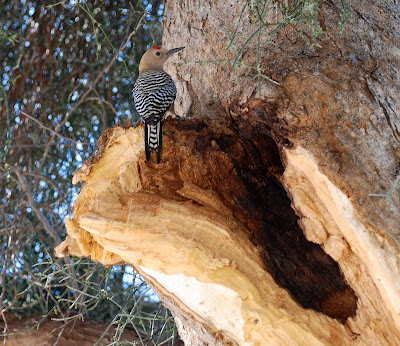 Vermillion Flycatcher is on my dream bird list-gorgeous bird!-and another great report!

Thanks Larry! I couldn't believe it the first time I saw one, and I fell in love on the spot! I wrote a post called "Vermilion Flycatcher Love" about that encounter, but I didn't have photos then. I'm eager to see your totals and read your posting.

Nice pics again Kathie. You have so many interesting bird species where you live. I'm no expert, but I think your hawk is a Cooper's too, as you thought. It took me a long time to figure out if our Cooper's was indeed a Cooper's or a Sharp-Shinned. Tough call for a rookie bird watcher, but after looking for hints on IDing these two species I feel pretty confident that I got it right.

Amy, it appears we may both be wrong. After further reasearch and questioning my birding friends, I think it is actually a young redtail of the southwestern variety. They don't get the strong "bellyband" coloring here that the northern redtails get. Plus, the head isn't quite right for a Cooper's, nor is the tail long enough. This bird's tail isn't visible from this picture but I did see it and it wasn't red (yet). I am open to any other suggestions also. Part of the fun of birding is the challenge of identification, though it can drive you nuts when you want to add a bird to a count or a life list! Thanks for the support and the suggestion!