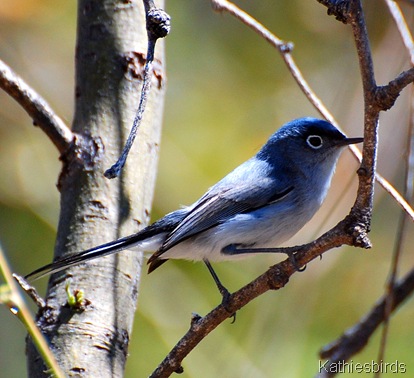 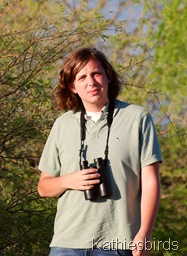 The day after Kathryn left I was out the door by 8 a.m to meet Matt Morrow in Madera Canyon. Matt had flown in from Alabama for little more that 48 hours to see as many species of birds as possible while he was here.  I met Matt while I was in Alabama in March and he had taken me around to see the local birds there.  I picked up three life birds then, now were were going to see how many we could get for Matt here. 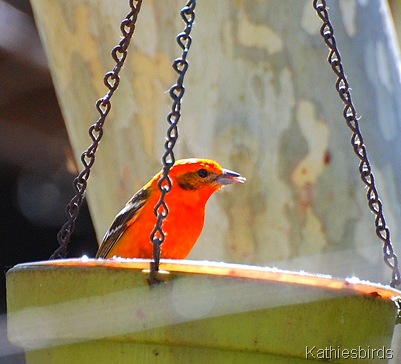 Matt had spent the night at the Madera Kubo and I met him there at the cabin.  He had already been up the mountain trails and captured a few *Life Birds on his own.  As I waited for him to collect his gear I watched as a Flame-colored Tanager came to the feeder outside the Kubo.  This was a *Life Bird for me also.  What a way to start a birding day! A hummingbird feeder hung from the roofline of Matt’s cabin where he was a able to see Broad-billed and Magnificent hummingbirds. Then we headed down the canyon to the Madera Picnic Area and the Proctor tail where he picked up Acorn Woodpeckers and a Says’ Phoebe. 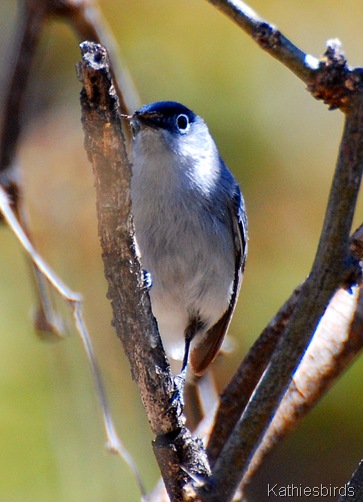 Along the Proctor Trail we followed this Blue-gray Gnatcatcher hoping against hope it was the black-capped.  but with such a prominent eye-ring and lack of the black cap we concluded that it was the blue-gray instead. 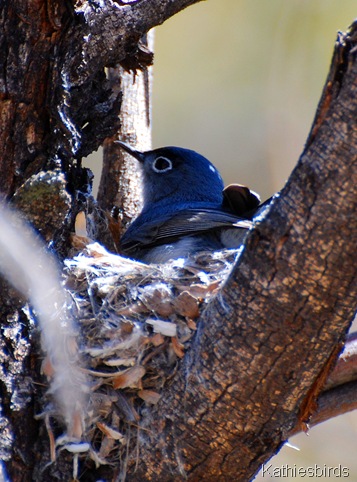 We soon discovered we had found a nesting pair and watched as they built their nest together in the crotch of a small tree. Though we kept our distance they really didn’t seem to mind us being there and they sang as they worked on collecting bits of moss and bark and twigs. 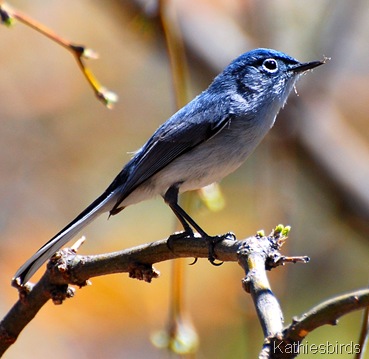 Then, on our way out of the canyon we stopped along Whitehouse Canyon road so Matt could see:

All of these were life birds for him.

We ate our lunch at Parque Los Arroyos in Sahuarita and of course, we watched birds while we ate.  This quaint little park is located in a neighborhood behind Walmart and is a hidden treasure.  These are the bird species seen in 1 hour there: 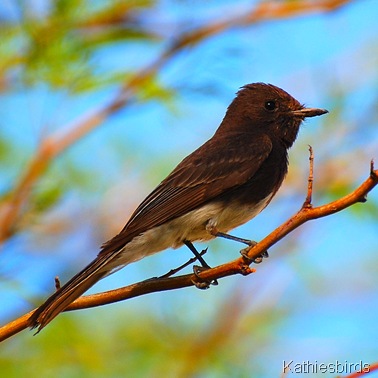 From Sahuarita we high-tailed it up to Sweetwater wetlands where we spent just a little over an hour counting birds and saw 36 species, including this Black Phoebe.  However, so far the Vermillion flycatcher had eluded us, so, it was off to some parks I know of in town where the Vermillion Flycatcher hangs out.

We tried Himmel Park first, which is where I saw my first Vermillion Flycatcher, but no luck today.  As we headed to Reid Park I kept thinking about where we could go next if there were no Vermillions there. I drove to the Northwest corner of the park which is usually a guarantee to see them and sure enough, I had barely parked the car when one flew up to the chain link fence surroundings ball field!  this was a female however, and I so wanted Matt to see that brilliant red male.  It wasn’t long before one showed up, and then another.  In all we saw 4 vermillion flycatchers there as well as a Cooper’s Hawk up in the pine trees.  But one of the most amazing things we observed was the mating flight of a hummingbird species. While we were watching the Vermillion Flycatcher catch insects on the ball field I heard the hum of wings nearby.  I looked and saw a female hummingbird sitting in one of the diamond shaped openings of the chain link fence.  Her back was to us, so I am not sure what species she was, and on the other side of the fence was a male hummingbird shuttling back and forth in front of her.  He did this a few times and then went into his dive display.  It was all so fast and blurry and he was on the other side of the chain link fence but we were less than 10 feet away and it was AMAZING! Matt and I both stood there with our mouths agape, awed by what we were seeing. We were only there 10 minutes but in some ways it was the best 10 minutes of the day! 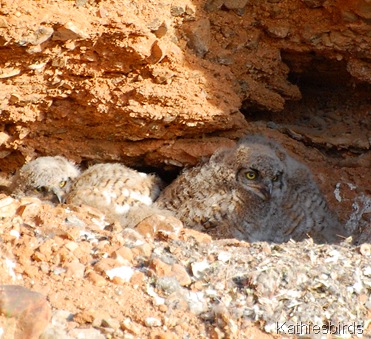 By now the shadows were getting long and we headed back to Sycamore Canyon.  On the way there I stopped at a place I know of to show Matt the great-horned owl chicks in their nest.  Last year there were 4 chicks.  this year there ear only 3. since owls are Matt’s favorite birds, this was a real treat for him.

The one bird still remaining on Matt’s list was the Gilded Flicker.  In all the places we had be to today we had not seen one. They live here in Sycamore Canyon and I see several of them every day, but it was getting late for them to show up at my feeders.  Still, I drove past the turn for my neighborhood to the top of Sycamore Leaf Drive where I know they like to hang out.  I was driving slowly and just as I was saying to Matt, “This is where the gilded flickers usually hang out,” as if on cue, one flew right in front of the windshield! I quickly pulled over so Matt could jump out for a better look, then, after he got back in the car and I was turning around we saw 2 more on a nearby saguaro. 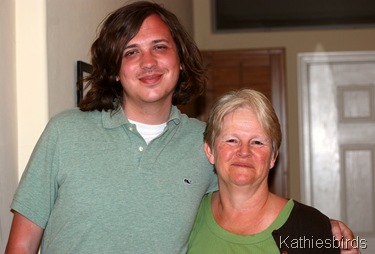 As Gus and I fixed supper, Matt sat in a chair on my back patio and played my classical guitar for me.  You see, Matt is not just a birder, he is also a musician and a fine human being as well. Gus took this photo of us before Matt left and as you can see, we both look exhausted but you can also see, we are both smiling!

*Life bird: A bird species a birder has seen for the very first time.

Matt got 39 Life Birds while in Arizona.

I got 1 Life Bird on this day!

Kathie you are an Amazing bird guide. I wonder how you get any thing done with all the bird entertaining. Who's next?

What a great report!

Some day I hope you can help me see more life birds too.

Yes a great report Kathie and such colourful birds.

amazing list of birds you saw. always fun to follow along with your trips. Love the blue gnatcatcher, super colors

Sounds like a wonderful day! Great picture of the Gnatcatcher on the nest.

What a wonderful, bird-filled day you both had. The pictures of the gnat-catcher are marvelous!
Ann

Gaelyn, I don't get anything done when I am out birding, so when everyone is gone I crash and then I clean house! Next I am going to Portal to bird with some new birding friends, not as a guide but as a learner and participant. Do I see a trogon in my future? Possibly an elf owl and a Mexican chickadee. All would be life birds for me.

Idaho Birder, I would love to go birding with you! I am learning more every day! Perhaps I can come to ID one day and you could come here!

forestal, thanks. I love how his white eye-ring shows up so clearly.

Roy, since your birds in England seem so exotic to me, I can only imagine how mine must seem to you!

Sweet Bay, it was a wonderful and full day and the gnatcatchers were a real treat.

Ann, thank you for your kind comment and your visit!

That's a fantastic number of birds. I think I would be in seventh heaven. How lovely that you got to spend some time with a fellow bird enthusiast. Wonderful collection of photos.

I wish you were my neighbor Kathie.
Miss you.
:)

Wow, that's a lot of lifers in one day. I wish I could go birding with you, Kathie! Love the flame colored tanager. Sounds like you both had a great day of birding. Wonderful photos!

Terrific Blue-gray photos! That was nice that you were able to help Matt out. He had a great guide!it's interesting to meet different people through birding.

Great post Kathie, You are a credit to the birding world.

wow..you two had a terrific day! Wonderful to see all of that in a day.

If only I lived closer....Great birding day with Kathie the consumate guide. FAB.